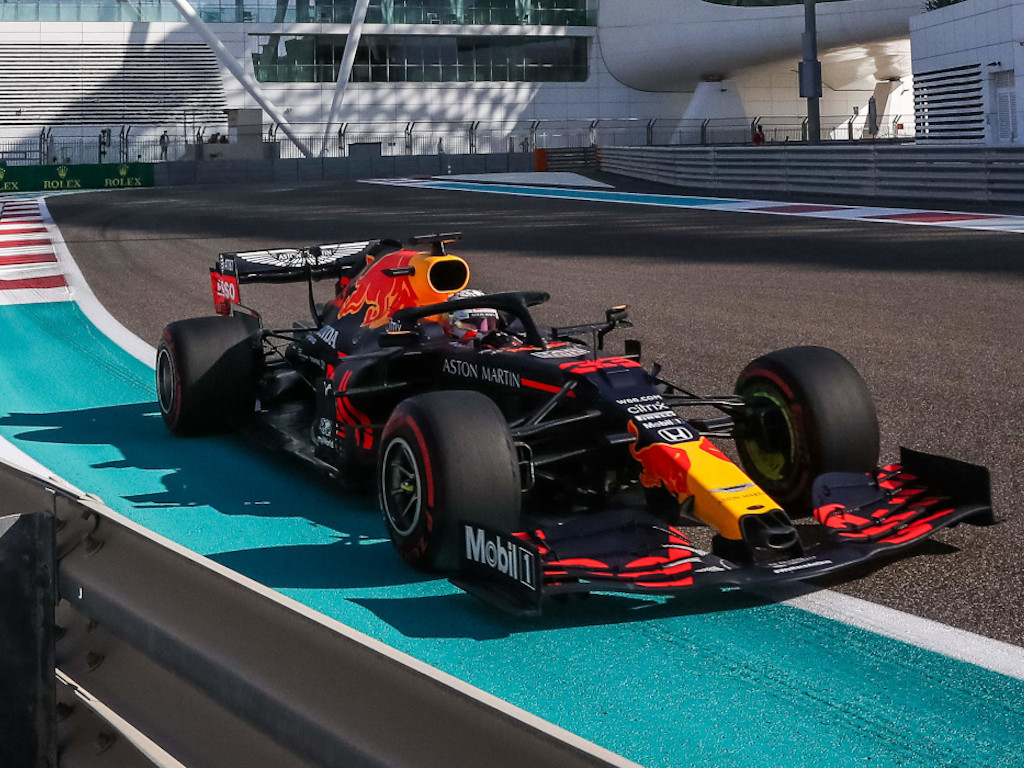 Max Verstappen will head into the season’s final qualifying full of confidence after leading a Red Bull 1-2 in FP3 for the Abu Dhabi GP.

Undoubtedly one of Formula 1’s least relevant sessions, the clock began its hour-long countdown on final practice for the Abu Dhabi Grand Prix – and the 2020 season – without a single car on the track for the first 16 minutes and 13 seconds. And then Nicholas Latifi broke the silence followed by Pietro Fittipaldi and Kevin Magnussen.

The Williams driver put in a 1:39.8 to get the timesheet rolling as one by one the rest of the field came out to play, including Lewis Hamilton and Valtteri Bottas. The Mercedes team-mates were running a new livery that features the names of everyone who has contributed towards Mercedes 2020 championship success.

Mercedes are running a special livery with the names of everyone who has contributed to the continued success of the team this season. A lovely touch. 👏 #F1 pic.twitter.com/d5K6uDE9gl

Out on the soft tyres, Hamilton backed off on his first flying lap after encountering traffic at Turn 1 with Bottas up to second behind Alex Albon. The Red Bull driver, who could be competing in his final race with the Milton Keynes team, clockeed a 1:37.5.

After a cool down lap Hamilton went again, this time nailing Turn 1 as he slotted into second place, 0.025s shy of Albon’s time. Lando Norris, on the mediums, climbed to third ahead of Bottas, Daniel Ricciardo and Esteban Ocon. The latter had a bit of smoke coming from the back of his RS20 but there were no signs of concerns on the Renault pit wall.

Verstappen was one of the last to set a time, immediately going quickest with two purples. A 1:37.1 for the Dutchman with Red Bull holding down the 1-2 halfway through the session.

Returning to the track, Hamilton split the Red Bulls, 0.1s down on Verstappen, while Bottas had a moment out of the final corner, narrowly keeping his W11 within the track limits. Verstappen responded with a 1:36.734, once again setting a fastest time in the opening sector and adding a purple in the third. And he did it on an old set of soft tyres.

Back out on track, Bottas and Hamilton were both only able to do green sectors, closing the gap to Verstappen but not able to challenge his tyre. Hamilton was three-tenths down with Bottas a further two-tenths off the pace.

Asking where he was losing time to Verstappen, Hamilton was told “in a straight line”.

Two drivers who did make big improvements with their new boots were Sebastian Vettel and George Russell, up to sixth and seventh. Both, though, were a second slower than Verstappen’s best and very likely to drop down the order as others ventured out.

Verstappen extended his advantage at the front, once again quickest in the first and third sectors. He crossed the line with a 1:36.734, 0.14s quicker than Ricciardo with Ocon 0.02s down on his team-mate with Norris a further tenth down.

Another hot lap from the Red Bull driver, this time purple in the middle sector, and he took a further 0.48s off his previous best with a 1:36.251. Albon improved to second despite a few concerns about his RB16’s set up. He was half a second down on his team-mate.

Albon: "Are we sure we're okay because the understeer is insane?"

Something to investigate for Red Bull before qualifying 🔎#AbuDhabiGP 🇦🇪 #F1 pic.twitter.com/Nl2Zc0zNtg

Ricciardo was third ahead of Ocon, Norris and Hamilton with Lance Stroll, Carlos Sainz, Bottas and Sergio Perez completing the top ten.