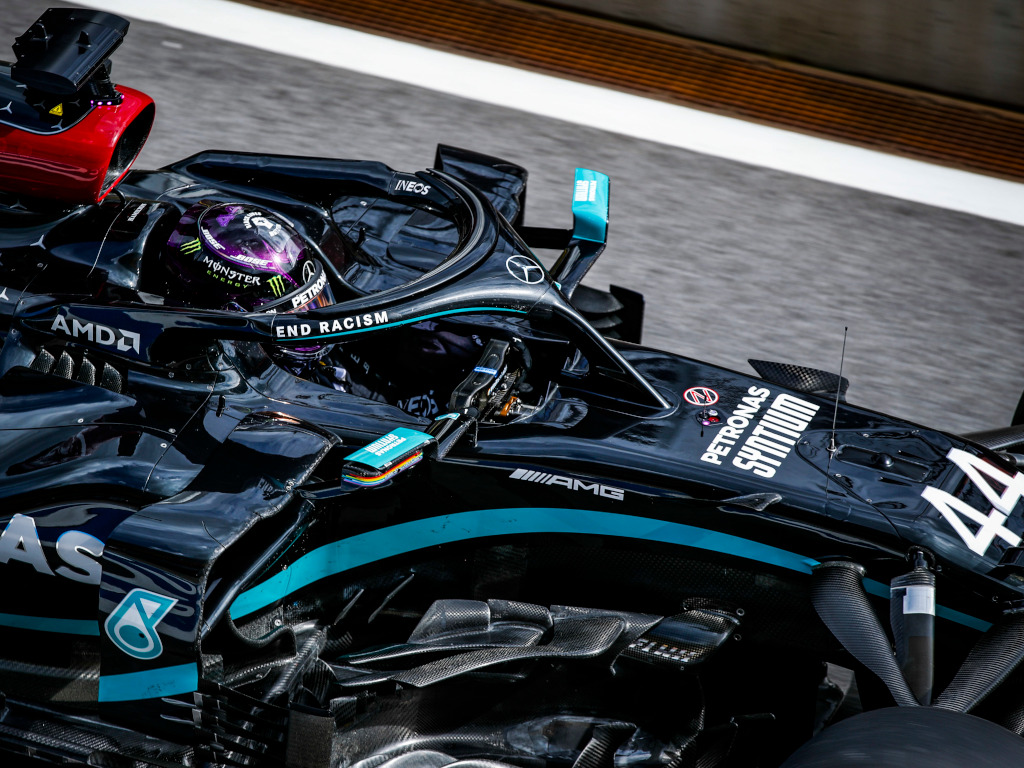 Lewis Hamilton was quickest in FP3 at the Red Bull Ring as Nicholas Latifi’s claimed the dubious honour of being responsible for the season’s first red flag.

Formula 1 arrived at the Red Bull Ring on Saturday morning to be greeted by sunshine and blue skies, a contrast to Friday’s gloomy conditions.

The track temperature was up at 42’C at the start of the hour-long FP3 session.

Carlos Sainz laid down a 1:06.307 to get proceedings underway, the Spaniard’s opening gambit just a second shy of his best from Friday afternoon.

With a clear track ahead of him, only six drivers even put in a lap in the first 15 minutes, the McLaren driver banged in the laps alone.

When the Spaniard eventually pitted after eigth laps, he did so with damaged bargeboards from riding one too many kerb.

Sebastian Vettel, on the soft tyres, hit the front with a 1:05.159 to sit ahead of Valtteri Bottas, Daniel Ricciardo and defending Austrian GP champ Max Verstappen.

It wasn’t long before Friday’s pace-setter, Hamilton, edged them all. He did a 1:05.140 on the medium tyres, 0.019s ahead of Vettel’s soft tyre run. Charles Leclerc moved up to third place.

The session was red flagged with 35 minutes on the clock as Nicholas Latifi, this year’s only rookie, went rear first into the barrier at Turn 1.

He got onto the yellow kerb, spun his Williams and clouted the tyre barrier. Not a great start to his first Saturday as a Formula 1 driver.

More angles on that Latifi crash at Turn 1 👀

The @WilliamsRacing driver is out of the car and ok 👍#AustrianGP 🇦🇹 #F1 pic.twitter.com/UIOv45i8R3

Latifi’s crash triggered the medical light and he was taken to the track’s medical centre for checks. Williams confirmed he is OK.

FP3 resumed at 12:34 local time with 26 minutes of running remaining. Mercedes returned to the track on the medium Pirellis, raising questions about whether the team, whose DAS has been declared legal after Red Bull protested, will try to make it through Q2 in qualifying on the mediums.

Verstappen, also on the mediums, moved up to fourth place to sit behind the soft-tyred Ferraris.

A flying middle sector from Vettel saw the Ferrari driver, still on the softs, pip Hamilton by 0.289s. Leclerc beat them both, a 1:04.703.

Swapping to soft tyres for a late run, Hamilton went purple in the first sector, Bottas purple in the second. Bottas went quickest and Hamilton pipped him. A 1:04.130 for the Brit who was a tenth up on his team-mate.

Verstappen was the next on the reds and he jumped up to third place, 0.283s down on Hamilton. He lost time in the final sector but was still Mercedes’ closest challenger.

Sergio Perez lined up in fourth place while Alex Albon split the Ferraris in sixth with Lance Stroll slotting in behind Vettel in eighth.