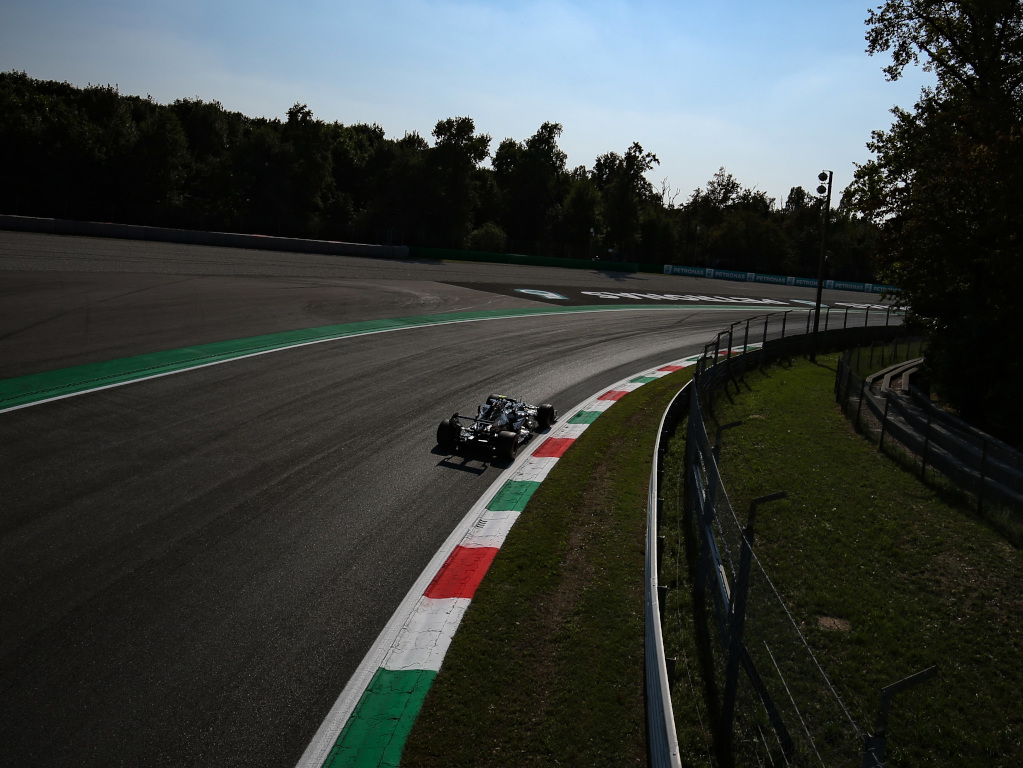 Valtteri Bottas flirted with the track limits on his way to P1 in final practice while Daniel Ricciardo brought out the reds and Lewis Hamilton narrowly avoided a big one in the traffic.

Watched on by cardboard cut-outs, 76 of which had been bought by Sebastian Vettel to represent the Ferrari team, final practice for the Italian Grand Prix got underway at a warm Monza circuit with zero chance of rain, 26’C air temperature and 36’C track temp.

As of Saturday’s final practice all the drivers had to adhere to a new maximum time of 1:43s. The FIA set out the rule to avoid a repeat of last year’s qualifying fiasco as the drivers in Q3 all went as slow as possible, hoping to get other cars to overtake them in order to grab a tow. Seven drivers failed to make it across the line to start a final hot lap.

FP3 got off to a slow start as, seen all too often in FP3 these days, silence descended after a handful of drivers did installation laps to check on any overnight changes.

It wasn’t until Carlos Sainz some 18 minutes into the session that the first lap time was set, a 1:21.8 on the medium tyres.

Team radio: "Carlos, looks like a reasonable start to the session. You're the only car out.

Team radio: "You are P1. Purple in all sectors."#ItalianGP 🇮🇹 #F1

Interesting McLaren was deliberately slow to let the Spaniard leave the garage. With high tyre pressures in play this weekend, pressures that are measured as the tyre blankets come off, McLaren left him sitting for a short while as the tyre temperatures dropped, and so too did the pressure.

Taking three-tenths off his time, Sainz was joined by a queue of cars including the Ferraris of Vettel and Charles Leclerc, both on the soft tyres, and the Mercedes of Valtteri Bottas and Lewis Hamilton, also on the softs.

Bottas went quickest, Hamilton went even quicker, 1:20.6, Pierre Gasly jumped up to third ahead of Daniel Ricciardo and Sainz while Leclerc was eighth and Vettel 11th.

Leclerc was in trouble with Norris after massively blocking the McLaren driver at Parabolica when on a flying lap. “Do they not know what blue flags are?” asked the Brit.

After a cool down lap Bottas upped his pace to a 1:20.622, edging Hamilton by 0.036s. Esteban Ocon improved to third ahead of Max Verstappen and Sergio Perez, all three on the medium tyres, and Gasly.

Continuing on the mediums Verstappen hit the front with a 1:20.4, 0.166s faster than Bottas. Ocon, Perez and Kvyat lined up as the top six after the first runs were complete.

Despite the new 1:43 maximum time limit many of the drivers did not adhere to that in the first 40 minutes, a curious case given that they actually needed to practice it before qualifying. 1:50s were recorded by most drivers with even a 2:02 by George Russell.

Bottas kicked off the qualifying sims with the Finn leaving the pits on a fresh set of soft tyres. Purple in the second and third sectors, he did a 1:20.089 but flirted with the track limits at Parabolica with his right wheels barely touching the white line on corner exit.

Hamilton meanwhile made a mistake at the chicane and backed off on his hot lap. The Brit’s second lap was 0.350s down on his team-mate’s best, which did stand.

Lando Norris improved to second place, 0.323s, with Ricciardo taking third ahead of Hamilton and Verstappen. That, though, is where Ricciardo’s session ended.

The Aussie stopped on track approaching the first Lesmo, bringing out the red flags due the position of the car. “I have an issue, I have an issue,” he told Renault.

The session resumed with three minutes on the clock, a mad dash for a final hot lap, and a queue of cars surrounding Parabolica that almost led to Hamilton crashing into the back of the queue.

Bottas held onto P1 ahead of Sainz and Norris with Ricciardo fourth ahead of Hamilton and Verstappen.

Albon, who was on a good lap but had it deleted, was seventh with Ocon, Stroll and Perez completing the top ten.