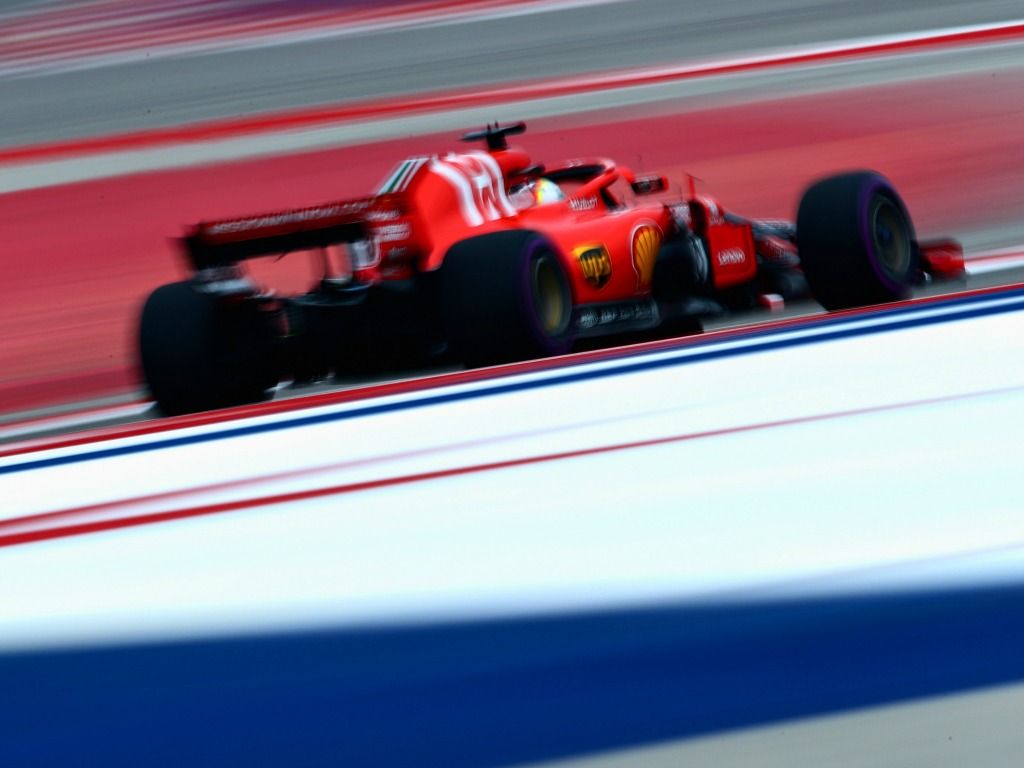 Sebastian Vettel topped the final practice session in the first dry conditions of the weekend in Austin, Texas.

Vettel, who has a three-place grid drop coming his way after a red flag violation in FP1 on Friday, was quickest with a 1:33.797 on the ultrasoft tyres.

Kimi Raikkonen kept in close quarters throughout the session and was just 0.046 seconds behind his team-mate come the checkered flag.

After a few scruffy laps for Lewis Hamilton, he was able to challenge the Ferraris in the final couple of minutes and was just 0.073 seconds behind.

Valtteri Bottas was a distant P4, seven tenths down but on the ultrasofts, while Max Verstappen and Daniel Ricciardo were well off the pace in P5 and P6 respectively.

Charles Leclerc headed the rest of the midfield,with Sergio Perez, Carlos Sainz and Romain Grosjean rounding off the top 10.

A very busy final practice was in store after the wet weather stayed away for FP3 at the Circuit of The Americas, allowing drivers to collect the first pieces of data in dry conditions for the first time this weekend.

With Hamilton and Bottas opting for some high-fuel runs to begin with, it was Ferrari who set the early pace with both Raikkonen and Vettel emerging from the garage with new ultrasofts strapped on.

On their first hot laps, it was Raikkonen who was able to eclipse his team-mate with a 1:35.514, but just 0.039 seconds separated the Ferrari duo.

Coming up to the halfway point of the session, Raikkonen and Vettel headed out for another fresh ultrasoft run. Both Red Bull cars instead joined Mercedes in some longer running.

Raikkonen dropped the benchmark down to a 1:34.419, and Vettel would have beaten it had it not been for a slightly scruffy middle sector which left left him a tenth behind the Finn.

Bottas then did his first qualifying sim lap, but on the slower supersoft compound. He slotted into P3, just a tenth behind Raikkonen after also having a little bit of traffic to contend with.

Hamilton’s first attack on the leaderboard was far from straightforward after a mistake at Turn 1 and a big twitch through the penultimate corner in the final sector. With the ultrasofts fitted, he was seven tenths down on Raikkonen after that rather forgettable lap.

Raikkonen then upped the ante by pumping in a 1:33.843, which Vettel immediately responded to by going 0.046 seconds quicker and that was with a Turn 1 lock-up thrown in, too.

Hamilton, meanwhile, was continuing to struggle to put a clean lap together. He found improvement on the third time of asking, but with the used ultras he was only able to narrow the gap to seven tenths.

In the final minutes, Hamilton came back out for one last crack and was finally able to close right up to the two Ferraris.

After going quickest in the final sector, the World Championship leader ended the session just 0.073 seconds behind.