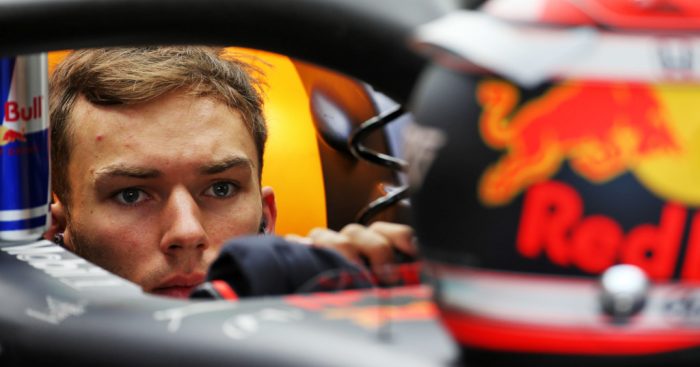 Demoted to Toro Rosso after struggling at Red Bull, Giedo van der Garde has told Pierre Gasly to “prove everyone wrong” and “give ‘m hell”.

Although Red Bull went into the summer break proclaiming that they would not change their driver line up before the end of this season, the team announced on Monday that Gasly would be returning to Toro Rosso with immediate effect.

His place at Red Bull would be filled by Alexander Albon, the rookie taking the step up after just 12 races in Formula 1.

Red Bull stated in their press release that the move was being made with an eye to evaluating the drivers before making a call on Max Verstappen’s 2020 team-mate.

That means the although his situation is painful, the door has not been completely shut for Gasly.

But van der Garde says it is up to the Frenchman to fight for his place at Red Bull.

Following Monday’s announcement, the former Caterham driver took to Instagram and wrote: “Back in 2013 my results halfway at Caterham F1 weren’t as I expected, neither what the team expected.

“It was my first year in Formula One, and soon I realised how everything happened in a blink of a second.

“One race a crash, the other one mechanical issues and before you know it you’re under a level of pressure you’ve never experienced.

“”It’s only the first year, keep calm, you’ve showed it in GP2, the coin will flip your side again” is what I kept telling myself.

“Then the phone rang.

“It was my team boss, who I always had a good relationship with. “Listen mate, screw up the next race and you’re out.”

“I didn’t panic though, but turned the pressure into motivation.

“Next race was Spa, where I ended up in Q2, and got hugged by the team boss again. That’s F1 too.

“But never give up mate, get your confidence back and the flow you were in last year and I’m sure you can prove everyone wrong.