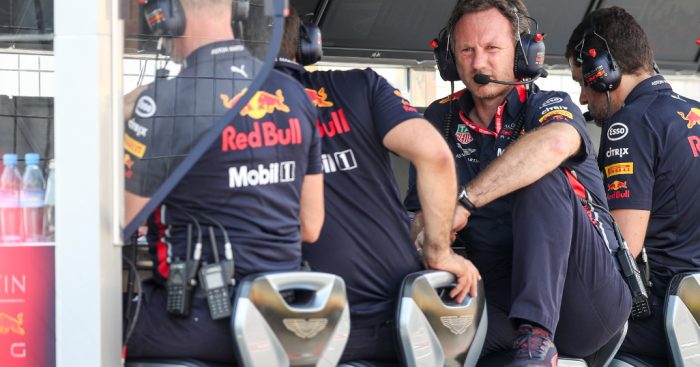 Although Ferrari insist punishing the team and not the driver was the “proper” call in Germany, Christian Horner says he “slightly crapped” when Romain Grosjean headed towards him.

Ferrari were controversially handed a monetary fine for their unsafe release of Charles Leclerc during the German Grand Prix.

The Monégasque driver was released into the path of Grosjean with the Haas driver forced to hit the brakes to avoid a collision.

It was a clear case of an unsafe release and yet the steward opted not to penalise Leclerc the standard five-second time penalty.

Asked for his thoughts on the incident with his own driver Max Verstappen having lost a podium finish in Monaco due to an unsafe release penalty, Horner says he feels the German GP incident was “pretty frightening”.

He told reporters: “I slightly crapped myself when I saw Romain Grosjean heading for me at the pit wall.

“From my point of view it looked really unsafe, pretty frightening prospect that.

“Max got a penalty in Monaco for what was an unfair release and it was deemed that it was because he touched the car of Bottas.

“It’s a tricky one, they are slightly different incidents but I think that what you want to see more than anything is an element of consistency.

“Otherwise, from a team point of view, from the guy that’s releasing the car, what call does he make when he’s making that release now?

“It’s a difficult one.

“Where there are pit lanes like in Silverstone, we actually had a good scenario where the two cars were released and there was enough room for them to go side-by-side down the pit lane.”

As for Ferrari, team boss Mattia Binotto believes the right call was made on the day.

“During the weekend at Hockenheim, I think that the drivers met with the FIA on the Thursday and discussed the approach.

“What was key was certainly to be safe respective to the mechanics in the pit lane which was a key factor.

“For example, in the case of Charles, the Red Bull team was ready for a pit stop and was just in front of him and I think the way that somehow Charles drove was very safe in respect of the mechanics and the pit crew.

“Yes, he had to slow down to be careful with the cars coming in but that’s a racing situation and I think that as a team, when you’ve got such traffic, again, I think what is key is safety first and then in a racing situation where we have been fined, I don’t think there will be a much different situation or different judgement in the future.

“I think the way it has been judged was the proper one.”

F1 race director Michael Masi has subsequently made it clear to all the teams that from now on a standard time penalty will be issued for any unsafe release during a grand prix.