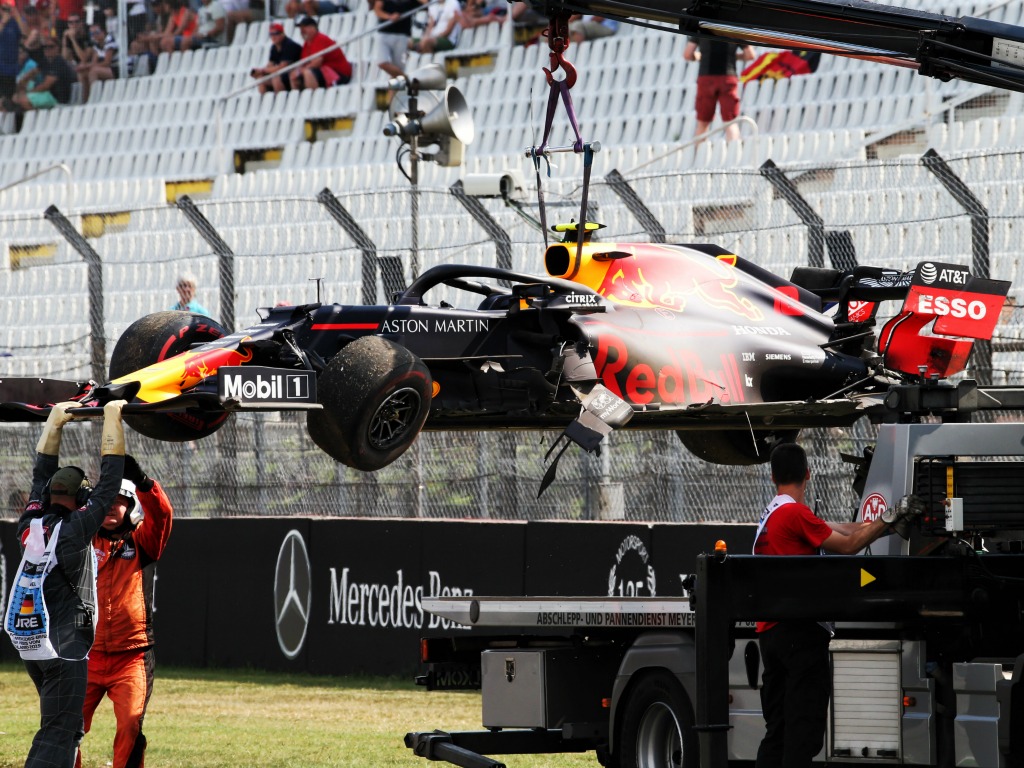 Red Bull boss, Christian Horner, was left visibly frustrated after Pierre Gasly crashed out in second practice ahead of the German Grand Prix.

Following on from a strong performance at Silverstone, where he finished a season-best P4, Gasly’s hopes of building on that momentum were dealt an early blow following a big shunt into the barrier at the final corner during his race simulation programme.

The rear of the RB15 snapped away from Gasly’s control, forcing him into the barrier and wrecking the left side of his car as a result.

Gasly emerged from the accident unscathed, but he was also struggling to be on the pace prior to his costly crash.

Speaking shortly after the session, Horner described the accident as an “annoying” one as the pressure seemingly mounts on Gasly’s long-term future with the team.

A dramatic ending to day one in Germany for Pierre Gasly 💥#F1 #GermanGP 🇩🇪 pic.twitter.com/PK8dQDvptd

“It’s early days, we need to get the chassis back and have a proper look at it first,” Horner told Sky Sports F1.

“Yeah…unfortunately it was around about a 10G impact and you can see it has done a bit of damage. Thankfully [he wasn’t using] his race gearbox or race engine.

“It’s just frustrating really to lose the car at that point of the session.

“Off the back of a good result at Silverstone, this is not the best start to the weekend. But it’s only free practice and we will get the car rebuilt tonight.

“It’s an annoying accident. But it is what it is, we cannot change it now and we just have to get on with it.

“It’s a shame after a confidence boosting weekend in Silverstone to now have that incident here.”

Gasly finished P15 in FP2 with team-mate Max Verstappen occupying P5. Horner was certainly encouraged by the latter result and thinks more time can be found as the weekend develops.

“You have to remember both cars had a numbers issue on their out laps, on the new tyres,” Horner added.

“So neither of them got a proper new tyre run [during the qualifying sims].

“So Max did that time on a scrubbed set of tyres which is actually quite encouraging. I think there a few more tenths in there on a brand new set of tyres.

“Hopefully we can work hard overnight and close that gap, but it’s Ferrari who look like the dominant team again.|”