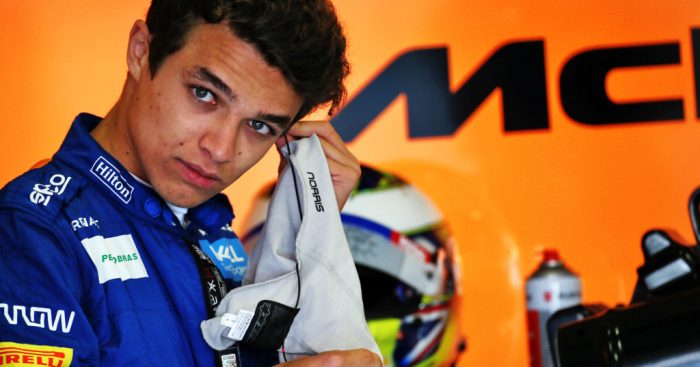 Lando Norris has said the sheer size of the McLaren operation has added pressure to his rookie season in the sport.

Norris has impressed in the first half of the season, finishing as high as P6 twice and helping the team establish themselves as the best of the rest.

Speaking to Motorsport.com about the size of McLaren, the Brit said: “It’s pretty insane. How nice everything is and how many people are there.

“It’s at the higher end compared to the majority of the teams.

“Every day I walk in, it’s always awesome. I’ve spoken to a lot of people, aerodynamicists and guys in different bays or the carbon shop or trim shop or whatever, it’s always cool and always find out something more. ”

While the youngster is generally enjoying being a part of such a huge operation, he admits that having so many people count on you does add pressure.

“It does add a bit of pressure at the same time, knowing all of these people there relying on Carlos and myself to do a good job,” Norris added.

“It puts more pressure on you but it’s a pressure that’s gone away more and more, in a good way.

“I did the first race and I was like ‘I’ve got a lot of people expecting things’.

“It’s the same now, but I’m more relaxed on that side, and more confident in my own driving, that I can do a better job and I won’t disappoint them.”