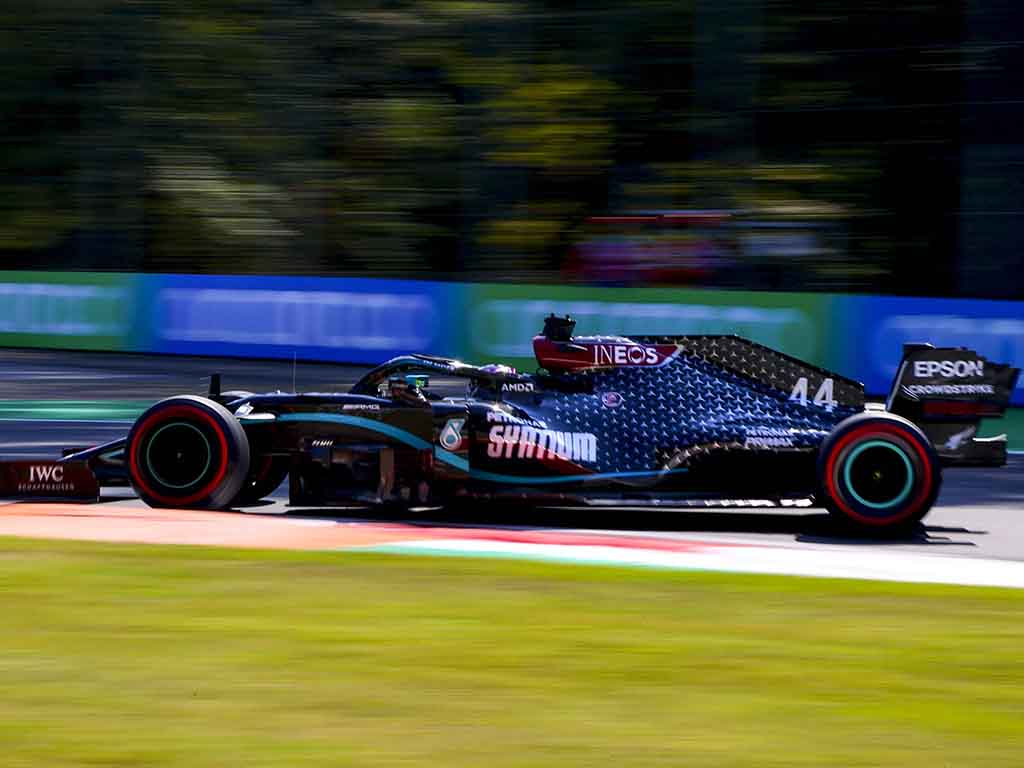 Mercedes continued to be in a league of their own at Monza, securing yet another 1-2 by a considerable margin in FP2 ahead of the Italian Grand Prix.

Two tenths separated session leader Lewis Hamilton – his best time was a 1:20.192 – and Valtteri Bottas…then there was a huge eight tenths between Hamilton and McLaren’s Lando Norris.

Norris provided viewers with a late surge up the leaderboard after overcoming some earlier engine issues.

Max Verstappen, the man with the almost impossible task of taking the fight to the Silver Arrows every race weekend was a full second behind in P5, pipped to P4 by Pierre Gasly.

The traffic woes seen at Monza in 2019 are showing signs of returning ahead of qualifying for the 2020 event, despite the FIA sending multiple warnings already to drivers about their speeds on non-push laps.

Just five minutes into FP2, Lance Stroll almost came to a stop heading towards the Ascari chicane with Haas’ Romain Grosjean crawling behind him.

Those queues continued in the first half of the session with George Russell reporting on team radio: “There’s going to be a shunt with all this at some point. F***ing nightmare.”

George Russell on the traffic woes at Monza:

"There's going to be a shunt with all this at some point. F***ing nightmare." #ItalianGP 🇮🇹 #F1 pic.twitter.com/RoXtZuH0zf

Meanwhile, back at the top, the Mercedes duo were on a split tyre strategy to begin with as Hamilton tested out the mediums and Bottas plonked on the hard compound.

Hamilton shot to the top of timesheet with a 1:21.085, while Bottas was three tenths down following his opening attack.

The World Championship leader went for another hot lap on the used mediums and found another four tenths in the bag.

Bottas also found improvement on his second run, closing the gap to two tenths. Guess who was in third? Yep, Max Verstappen.

Opening stints done, it was then time to awaken the soft red tyres from their blankets for the qualifying simulation runs.

After another huge train of F1 cars developed down the back straight, Bottas and Hamilton traded P1 spots with the latter bringing the benchmark down to 1:20.192. Bottas was two tenths down and Verstappen was a full second down on the Mercs, who will be without ‘party mode’ this weekend.

TD/037-20 limits the usage of engine modes, requiring teams to run the same ICE mode in qualifying and the race.

Sebastian Vettel and Alex Albon were amongst the drivers to have their lap times deleted for exceeding track limits at the Parabolica.

Most teams only opted for one hot lap during the qualy sim runs and headed straight on to the race simulations instead.

During the race sims, Vettel had a scary moment in between the two Lesmos and somehow managed to avoid major damage to the rear of the car.

Vettel gets out of shape coming out of the second Lesmo, and gently nudges the barrier

He returns to the pits but the car appears to be fine#ItalianGP 🇮🇹 #F1 pic.twitter.com/bPJcqWi4PP

Problems too for Gasly as the session clock winded down to the final 10 minutes. He returned to the pits slowly, reporting a problem at the rear of the AT01: “I have a problem guys, the car is bouncing at the rear.”

Mercedes appear to have a strong advantage on race pace as well. On the soft tyres, Hamilton averaged a 1:24.4 over six laps and Bottas averaged 1:24.6 over five.

Esteban Ocon and Daniel Ricciardo were the next quickest lapping in the 1:25.4 region.