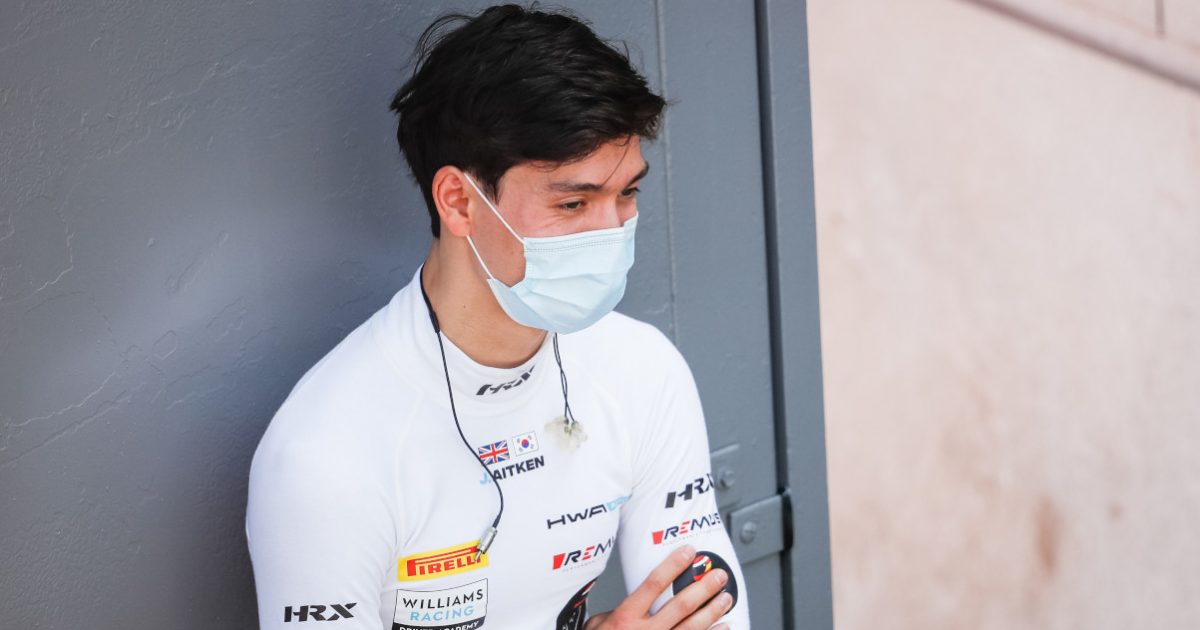 Williams reserve driver Jack Aitken suffered a broken collarbone and a fractured vertebra in a high-speed crash at the start of the Spa 24 Hours.

Competing in the Spa 24 Hours for Emil Frey Lamborghini, Aitken was involved in a four-car accident at the top of Raidillon, one of the fastest points of the circuit.

The Brit and Ferrari driver Davide Rigon were transferred to hospital with race organisers saying they had not suffered “life-threatening injuries”.

While Iron Lynx announced late Saturday night that Rigon had been discharged from hospital, the Italian wearing a back brace, Aitken remained in hospital overnight.

The official Spa 24 Hours website released an update on the Brit’s condition on Sunday morning, revealing he had suffered a broken collarbone, a fractured vertebra, which is stable, as well as a small lung contusion.

Aitken says he was “quite lucky” that he escaped without more serious injuries.

The 25-year-old said: “First of all, thank you to everyone who has supported me over the last several hours, from the marshals, medical staff trackside and at the hospital, my wonderful team, fellow drivers and all of you sending messages.

“All things considered I feel fine, and quite lucky.

First of all, thank you to everyone who has supported me in the last 16 hours or so, from the marshalls, medical staff trackside and at the hospital, my wonderful team, fellow drivers and all of you sending messages. All things considered I feel fine, and quite lucky. pic.twitter.com/BvTpwrHzI6

“I’m also sorry for my team-mates that we didn’t get to compete, and for the other cars involved.

“The aim now is to get back to the UK and start to recover as best as possible and be back in the car soon. I’m sure with the people around me I’ll manage it just fine!”

The other two drivers involved, Kevin Estre and Franck Perera, were cleared at the track’s medical centre.

Explaining how he saw the crash unfold, Porsche factory driver Estre told Motorsport.com: “Suddenly I saw a lot of smoke and a lot of debris in front of me over the crest.

“When I braked, I didn’t really know where to go, cause I couldn’t really see if there was a car stopped or anything. I just saw debris and some smoke.

“I stayed on my line, but then apparently I hit the Lamborghini of Jack Aitken on the right side.

“It was quite a big hit, which spun me and brought me into the barrier. So I think that’s how it happened. As I said, I couldn’t really see.”

Aitken, who made his Formula 1 debut with Williams last season when he filled in for George Russell at the Sakhir GP, is dovetailing a sportscar programme in the GT World Challenge series with his Formula 2 commitments with HWA Racelab.

“Sending our best wishes to our reserve driver Jack Aitken following an accident at the 24 Hours of Spa,” Williams said in a statement on Saturday night.

“Jack has been taken to hospital for further evaluation and fortunately with no life threatening injuries. Everyone at the team wishes him a speedy recovery.”