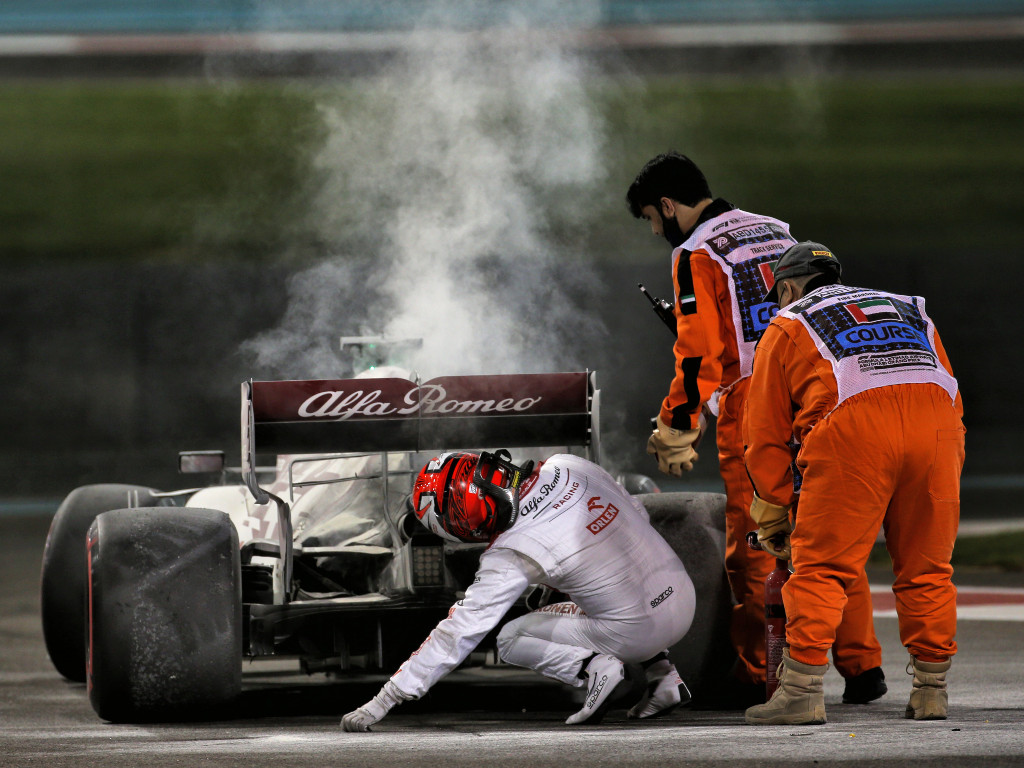 Kimi Raikkonen hopes that the fire on his Alfa Romeo during FP2 at the Abu Dhabi Grand Prix has caused only “bodywork” damage.

The Finn began to slow during the afternoon practice session as smoke rose up from the back of his Alfa Romeo C39.

That soon turned in to flames with Raikkonen then ordered to stop the car.

Raikkonen didn’t want to “speculate” on what damage was caused by the fire, but hopes it’s limited to the bodywork.

“I don’t speculate, we’ll see, for sure obviously there is some damage, hopefully it’s mainly bodywork,” he told reporters at Yas Marina Circuit after FP2.

“Obviously it isn’t the engine and gearbox that we run tomorrow, but yeah it’s a bit more work for the guys to do.”

There were some concerns over the apparent struggles that Raikkonen had when trying to get out of the burning C39.

But he said there was nothing “scary” about that, while the fact he grabbed the fire extinguisher off the marshals and proceeded to put out the fire himself, was explained when he revealed his worries over the further damage being caused to the car by the extinguisher.

“No there was nothing scary about it, it’s just a shame that it gets on fire and then it gets all messy with trying to put the fire down,” he explained.

Raikkonen finished FP2 in P14, a decent showing in the Alfa Romeo, but he said he didn’t get the chance to do much high-fuel running.

“We’ll see tomorrow and Sunday, obviously it’s only Friday and impossible to say,” said the Finn when asked if Alfa’s pace was on the up.

“I think things were pretty okay, on this day it wasn’t great, but we couldn’t do many laps let’s say more on high-fuel runs.”

During FP2 drivers were asked to complete at least eight laps on Pirelli’s prototype C4 tyres for 2024.

Raikkonen felt it wasn’t enough to get a true feel for them, but didn’t detect any obvious problems.

“Obviously we only did like eight laps on it, but it felt okay,” he said.

“I think it’s hard to say how they will be when we actually start using them properly. Nothing wrong with it in a general way.