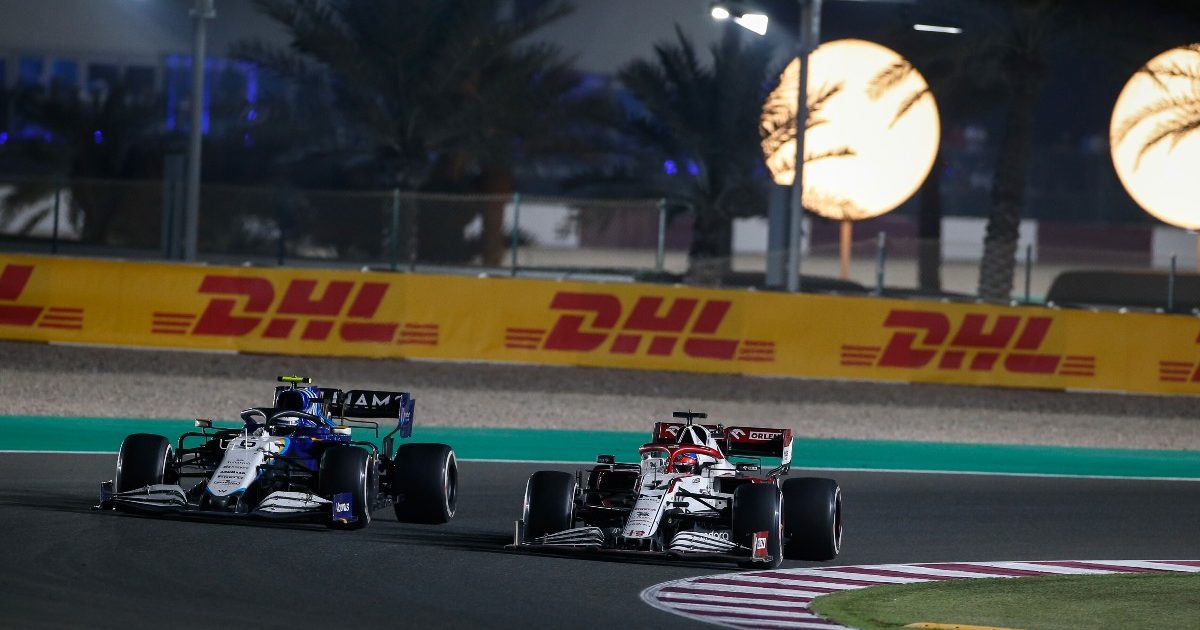 While Alfa Romeo’s level of competitiveness in Qatar was a pleasant surprise to Kimi Raikkonen, it was not quite enough for points.

Having spent very little time developing their 2021 challenger in order to focus fully on 2022, Alfa Romeo have found themselves detached from the midfield battle for much of this season.

Initially the Qatar Grand Prix appeared like this trend would continue, with both Raikkonen and team-mate Antonio Giovinazzi knocked out in Q1.

But come race day, Raikkonen actually found himself with the pace to mix it up with the midfield, crossing the line P14 in a race where his stunning pass on Williams’ Nicholas Latifi at Turn 1 proved the highlight.

The sudden discovery of pace did come as a surprise to Raikkonen, but he would have loved a little bit more.

“It was good to race with some people, but it was pretty much the same as [qualifying]: lacking a bit of speed everywhere,” he said.

“The car was actually getting better and better as we were going through the race, we gained some positions, in the end I was catching up, but I was lacking a bit of speed, so it’s a bit of a shame.

“I was surprised. I managed to pass quite a few cars into Turn 1 and I had thought it would be a bit more tricky.”

We fought for it, but the #QatarGP comes to an end with no reward for us this time.

Giovinazzi had set the target of being ahead of Williams and Haas come the end of the Qatar Grand Prix, which he and Raikkonen achieved.

Crossing the line P15, Giovinazzi admitted that anything more than that would have been “impossible”.

“I think we saw already on Friday and [Saturday] that our target without any issues in the front was to be in front of Williams and Haas,” Giovinazzi explained.

“In the end we did it, we had a great first lap and in the end the pace was just that.

“We opted for a two-stop, I think in the end it was okay. After the second stop I was stuck behind a Williams, we lost a bit of time there but more than what we did was impossible.”

Alfa Romeo team boss Fred Vasseur agreed that P14 and P15 was the best outcome possible, stating that his outfit had done well to contend with damage across the race weekend, yet deliver a “good recovery drive” come Sunday in Qatar.

“We had a better Sunday after a difficult weekend, on a track that has been quite tough for our cars,” Vasseur stated.

“Our pace through practice, qualifying and the race was affected by some damage we picked up during the sessions, so to pull together a good recovery drive, leaving behind the Haas and the Williams, was a positive.

“Both drivers did really well at the start, produced some good overtakes and in the end we were able to close to within three seconds of [Daniel] Ricciardo and [Yuki] Tsunoda. P14 and P15 was the most we could achieve and we did it.”

With two rounds to go of the 2021 season, Alfa Romeo find themselves P9 in the Constructors’ Championship, 12 points adrift of Williams.