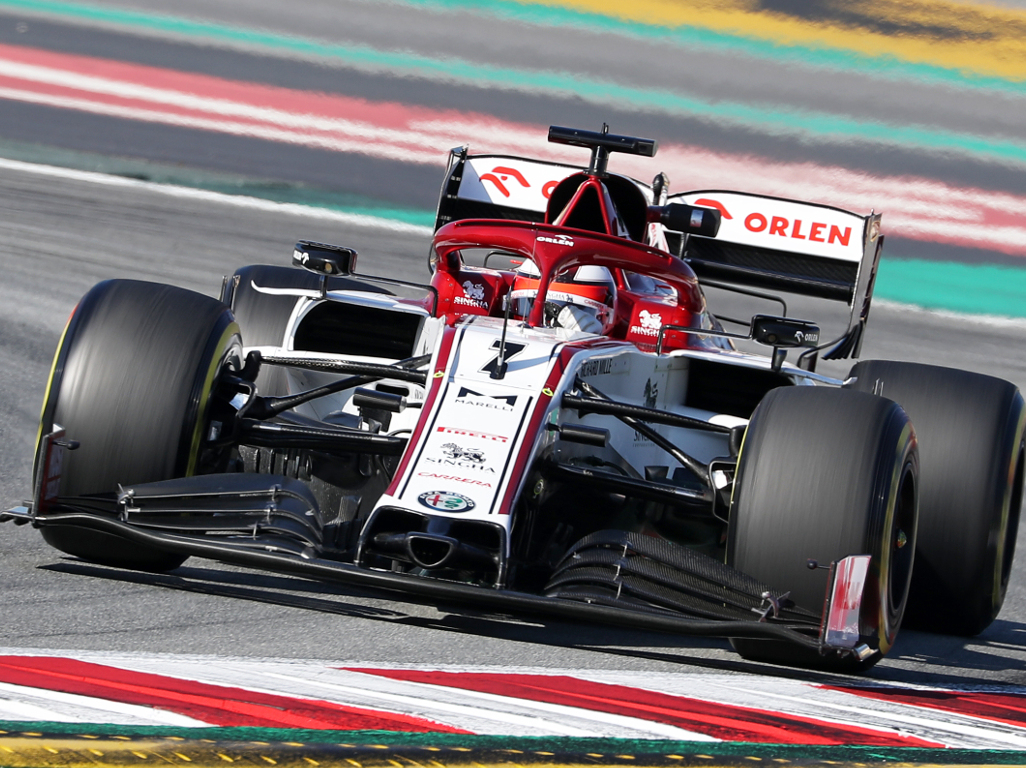 F1 almost made it through a second day without a single red flag, only for pace-setter Kimi Raikkonen to break down on a day when DAS was the main talking point.

While the drivers laid down the laps at the Circuit de Catalunya, social media was alive with talk about Mercedes’ strange steering wheel.

Lewis Hamilton was caught on camera moving his steering wheel back and forth, which adjusted the toe of his W11’s wheels.

Immediately questions were raised about the legality of the system, which we have subsequently learned is called DAS – dual axis steering.

Mercedes insist it is legal and has been cleared by the FIA while Hamilton says he had no concerns about “safety” while using it.

We call it DAS – Dual Axis Steering! 🛠 James has an update on today's hot topic of #F1Testing… 👇 pic.twitter.com/kKDHJqzutK

But while Hamilton was quickest on Wednesday, the Brit was only ninth fastest on Day 2 although he did use the slowest Pirellis available.

The Brit was a more than a full second slower than pace-setter Kimi Raikkonen.

Although it initially appeared as if Sergio Perez’s P1 time from the morning session would hold fast, Raikkonen put in a late run in the Alfa Romeo to top the timesheet.

The Finn, who this season will become the most experienced driver to have ever raced in F1, clocked a 1:17.091.

However his P1 day ended in red as the 2007 World Champion ground to a halt at Turn 9 with 15 minutes left on the clock, cementing his place at the top of the log.

After going fastest, Kimi grinds to a halt on Day Two of #F1Testing 😫#F1 pic.twitter.com/nIBL0Ra4zh

His time put him 0.256s up on Perez, who was behind the wheel of his Mercedes-copied Racing Point RP20.

Daniel Ricciardo finished the day with the third best lap although he lost a bit of track time after running over a kerb that damaged the RS20’s floor.

Screens may be banned this season but Renault had a lot of work to do on the car so pulled down the shutters.

Alexander Albon put in his first run in the RB16, replacing Max Verstappen in the Red Bull for Day 2.

The Thai-British racer was a slower starter due to a seat fitting issue but recovered to finish P4 ahead of AlphaTauri’s Pierre Gasly.

There was bad news and good news for Gasly on Thursday.

He pretty much started his pre-season with a spin, similar to his Red Bull incidents from last year. But unlike last year, he kept the car well away from the barriers.

Going for an early morning spin 🤪

Those chilly Barcelona mornings can bite at any moment, as Pierre Gasly found out ❄️#F1 #F1Testing pic.twitter.com/d3rPnSPreF

George Russell had another great day for Williams, P7, separating the Ferraris of Sebastian Vettel and Charles Leclerc.

The Scuderia drivers split the driving duties on Thursday with Leclerc in action in the morning, with a best of 1:18.335, before Vettel, off sick on Wednesday, clocked a 1:18.154 in the afternoon.

Vettel’s best time was set on the Compound 4 tyre while Leclerc used the 3.

Lando Norris, spending his first day in the MCL35, completed the top ten ahead of Romain Grosjean, Esteban Ocon and Valtteri Bottas.

Grosjean covered 158 laps in his Haas before spinning and hitting the Turn 4 wall while Bottas, who spun at Turn 13 midway through the afternoon, was garage-bound for the final two hours of testing due to an electrical problem.