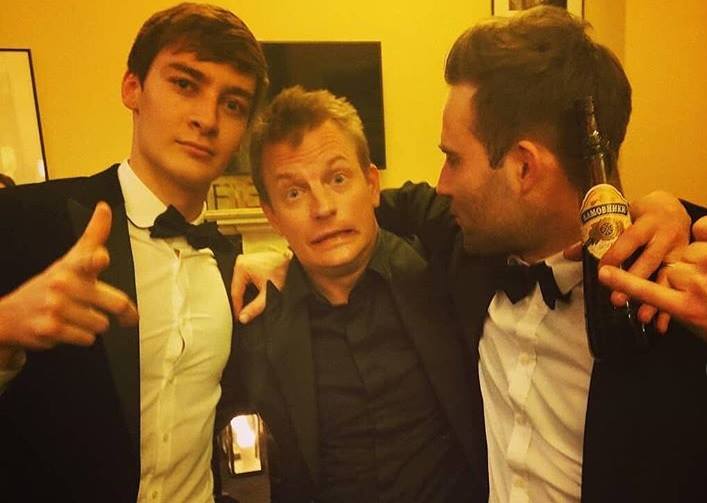 Kimi Raikkonen was in fine form last night at the FIA Prize-Giving Gala in Saint Petersburg, thanks to a drink or seven.

The Prize-Giving Gala brought together the stars of many disciplines of motorsport for an evening of celebration in Russia.

Although he was under the weather, Lewis Hamilton made an appearance in Saint Petersburg, wearing a pair of green trousers usually worn on the golf course.

Sebastian Vettel showed that Movember was not over in his household, with these stunning piece of face fluff.

But it was the Flying Finn that stole the show.

The stars were out and so were the drinks, as Kimi showed when he went up to collect his P3 trophy.

He went up to the stage alongside former Ferrari team-mate Sebastian Vettel. The German finished the year in P2.

Turns out that he was just a tad sloshed come the end of the night, as you can see in this comparison photo alongside his wife, Minttu.

Meanwhile, Toto Wolff collected the Constructors’ trophy for Mercedes, after another year of dominance from the Silver Arrows.

The Monegasque driver picked up the Rookie of the Year award for his efforts with Sauber in F1 this year, having won the award for the Formula 2 title victory in 2017.

🏆 #FIAPrizeGiving – The rookie of the year award honours the most outstanding driver to have just completed their first season in an FIA Championship at any level. @Charles_Leclerc picked up the award for the 2nd consecutive year. Congratulations! pic.twitter.com/qOUTSYvruM

It was not just Formula 1 that was being celebrated on the night, though, as Jean-Eric Vergne collected the Formula E trophy after being crowned Champion of the 2017-18 season.

🏆 #FIAPrizeGiving – It was a giant-killing 4th season for @JeanEricVergne in the @FIAFormulaE championship. He became the 4th driver in as many seasons to be crowned. @audiformulae won the #ABBFormulaE championship for teams. pic.twitter.com/k5tixdOaWq

There was also celebrations for the rallying fraternity as well. Sebastian Ogier collected the trophy for winning the World Championship for a SIXTH consecutive year.

There was also a prize for ‘Action of the Year’ with Teemu Suninen, who somehow managed to get his car facing the right way in spectacular fashion.

#FIAPrizeGiving – The only prize voted for by motor sport fans around the world this evening, the FIA Action of the Year award celebrates the most spectacular moments of the past racing year. Your winner is @TeemuSuninenRac @OfficialWRC pic.twitter.com/ew9VHDiYP8

What year of motorsport it has been in 2018, and we have it all to look forward to next year.

Can Sebastian Ogier win a seventh consecutive WRC title? Will one of the new F1 drivers take the Formula E crown, and can Lewis Hamilton win a sixth F1 title?