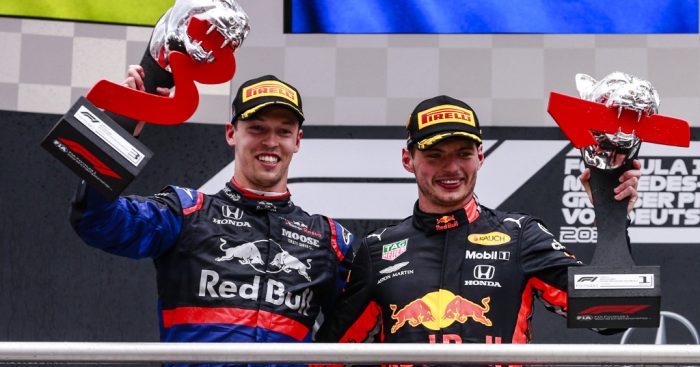 Daniil Kvyat may have put a Toro Rosso onto the podium for only the second time in the team’s history but that doesn’t mean a Red Bull promotion is on the cards during this campaign.

Up until Sunday’s German Grand Prix, Toro Rosso had managed just one podium in their 14 years.

That belonged to Sebastian Vettel who won a wet Italian Grand Prix in 2008 having started from pole position.

After a decade’s wait, Kvyat made it number two as he raced from 14th on the grid to third at the chequered flag at the Hockenheimring.

It was a dream result for the 25-year-old and came less than 24 hours after the birth of his first child.

More to the point, it showed what one can do with perseverance as two years ago Kvyat was sacked from the Red Bull programme only to be rehired at the start of this season.

“It was an incredible few years in my life,” he said in the post-race press conference.

“A lot of realisations in my life because it was sometimes tough times and I thought maybe Formula 1 was over for me, and maybe I thought, especially podium, I would never ever have it again, but life just proves that if you work hard and never give up, things are possible.

“All these three difficult years, just felt like they crashed from my shoulders finally. I lost these chains today.”

Kvyat’s P3 came at the same race that the under-fire Pierre Gasly crashed out of a point-paying position.

Kvyat added: “It was hard work to reach this moment and hopefully I can send the message out there that I’m ready now to fight for this kind of moment on a consistent basis – and there is no stronger message than a podium like this.”

However, Red Bull advisor Helmut Marko is sticking to his guns regarding Gasly, adamant the Frenchman will see out the season with Red Bull.

He told Motorsport.com: “This year we will not change anything, we will finish the season with the same line-ups that we have now.

“Kvyat has always been an excellent driver in the rain. Before the start of the race, I told him that it was his weather – and he carried out his task to the maximum.”