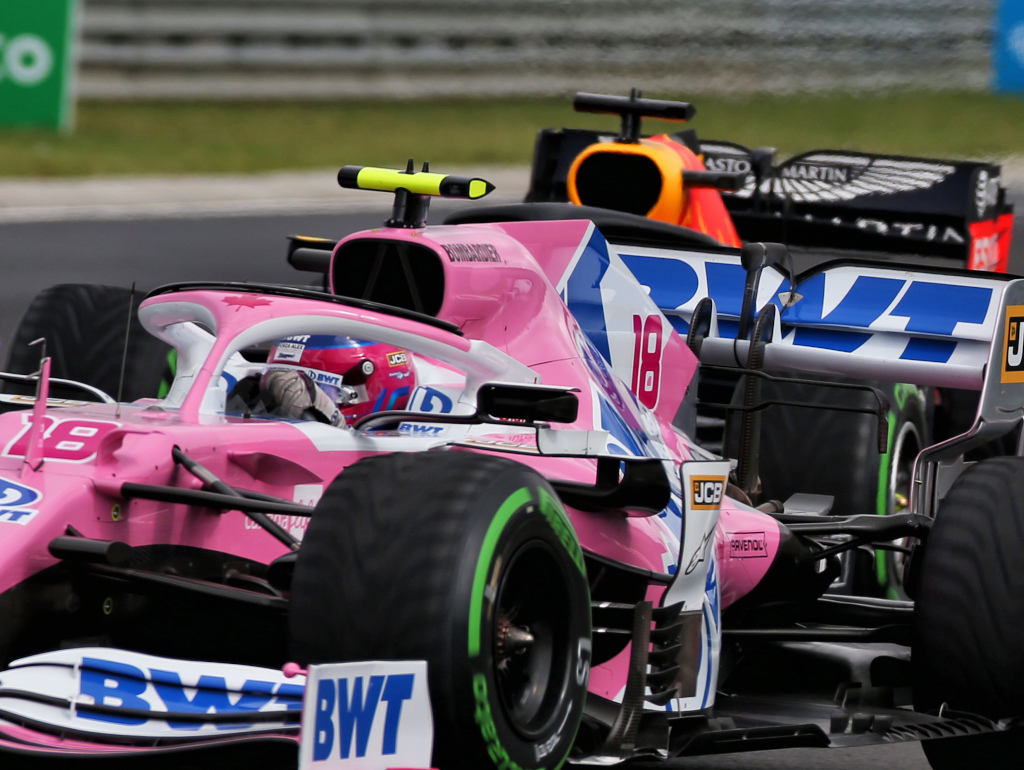 Lance Stroll reckons with the right strategy he could have challenged Valtteri Bottas for a podium at the Hungarian Grand Prix.

The pink Mercedes cars, which were again protested by Renault in the wake of Sunday’s race, started the grand prix from the second row of the grid with Stroll ahead of Sergio Perez.

The Canadian made a great start and immediately attacked Max Verstappen for second place, running P2 in the early laps behind Lewis Hamilton.

As the drivers one by one entered the pits to swap their intermediate tyres for slicks, Hamilton and Stroll only did so on lap 4 with the Haas drivers have already made the change on the formation lap.

That made all the difference.

Stroll found himself behind the Haas cars and while he made short work of Romain Grosjean, he struggled to get past Kevin Magnussen, allowing Valtteri Bottas to close up on his rear wing.

Stroll makes a move on Grosjean to take P4 👀

Stroll eventually overtook the Haas with Bottas having no such troubles, following him through.

Bottas, though, found the Racing Point a lot harder to attack and opted to pit, using the undercut to take third off Stroll.

The Canadian was left to rue what could have been if only he had stopped before the Mercedes driver.

He finished fourth to Bottas’ P3, some 48s behind the Finn.

He said: “I think the podium was close today because we were in a big battle with Bottas and maybe we could have done things differently, but you can always say that after the race.

“That’s racing and we’ve got to be happy with fourth.”

Sunday’s points-scoring result was Stroll’s second in a row with the driver up to eighth in the Drivers’ standings on 18 points, four behind his team-mate Perez.

“It’s a good result and I have to thank the team for such a great job,” Stroll added.

“It was fun to fight Max at the start of the race and run in P2 in the changeable conditions.

“We actually ended up in quite a lonely race to P4, but the main thing is that we were able to score a good haul of points for the team, and so did Checo.

“It was such a complex race and I’m looking forward to reviewing it and learning what we can for the races to come.

“We’ve had three races now and looked strong in all of them.”

Team boss Otmar Szafnauer added: “Lance was in contention for a podium, but it proved difficult to hold off the recovering Mercedes of Bottas.

“The eventual fourth place for Lance is an excellent result following a mature drive to complete a very strong weekend.

“The 18 points scored consolidate our fourth place in the championship and we’re actually tied on 40 points with the third-placed team. This result is an important reward for the entire team’s efforts – both here in Budapest and back home in the UK.”