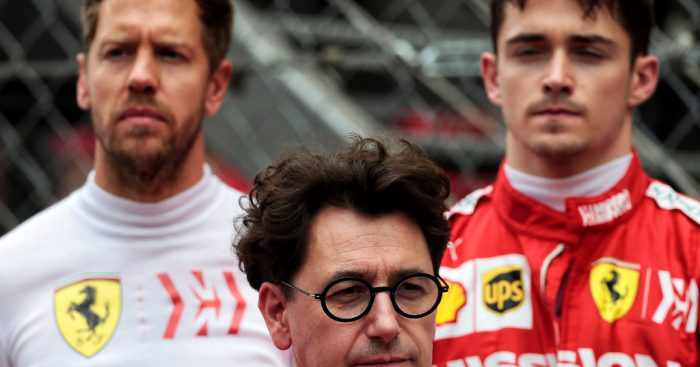 Sebastian Vettel believes his battle with new team-mate Charles Leclerc in 2019 is a good thing for Ferrari.

Leclerc replaced Kimi Raikkonen at the Scuderia for 2019, and from the get-go he has proven a good match for Vettel, but their potential battles on track have often been broken up by team orders from the Scuderia, including at the Spanish Grand Prix where they swapped the duo twice in the race.

Recent reports have spoken of trouble in the Ferrari camp, with Sebastian Vettel reportedly considering retirement, while their relationship with Charles Leclerc is apparently “close to breaking point” after his erratic and perhaps immature approach to his home race in Monaco.

However, Vettel insists that himself and Leclerc are having a positive effect on the team and are helping to develop the SF90 which is slipping away from the title fight.

“I think it’s positive. We’re pushing each other,” Vettel is quoted by Crash.net.

“But I think in fairness and keeping the respect, I don’t think I’ve had easy teammates in the past. I don’t think Kimi is slow. Obviously they are different: different people first of all, different drivers, different style.

“I think it became apparent for good reasons that Charles is very talented and very fast, so I think that’s a good situation for the team to have two drivers pushing the car to the limit and exploring the limitations, and trying to find out first of all what they are, and second how we can fix them.”