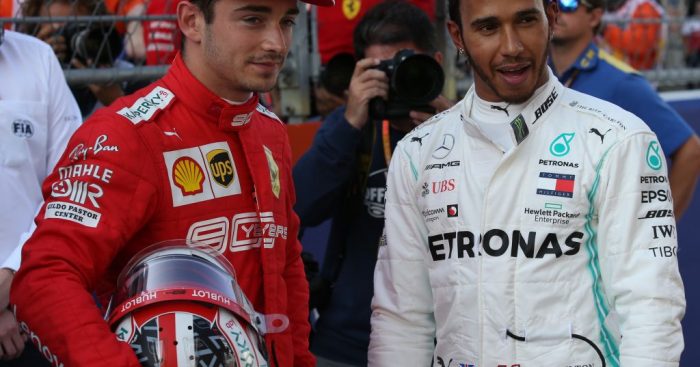 Charles Leclerc may have just claimed his fourth-straight pole in Formula 1, but he feels that isn’t the best starting position at the Russian Grand Prix.

The young Ferrari challenger has become a true force since returning from the summer break and in Sochi claimed his fourth-successive pole, the first man to do that in Ferrari colours since a certain Michael Schumacher.

Leclerc was in a class of his own in qualifying, outpacing Lewis Hamilton in P2 by 0.402s, though he isn’t sure that pole is actually the best starting position at the Sochi Autodrom.

“Yeah it felt amazing,” Leclerc told Sky Sports when asked how it felt to be on pole again.

“It definitely feels great to back on pole, but I don’t know if it’s the best track to start on pole.

“The straight is very long after the start, so tomorrow the start will be very important as always, but here probably even more because of the straight length.”

[BREAKING] IT IS POLE POSITION FOR @Charles_Leclerc HERE IN @SochiAutodrom 🇷🇺

Charles makes it four out four, 4th pole position in a row. Michael Schumacher was the last Ferrari driver to do so! 🔥

As for the comparisons to Schumacher, Leclerc was playing it very cool and didn’t want to think about the stats.

“It definitely feels very, very special, but I don’t really want to think about those stats for now,” he stressed.

“I just want to focus on the job – still a long way to go to tomorrow but it’s definitely a good start.”

Ferrari haven’t won four races in a row since 2008, but Leclerc feels he has the performance to put that stat to bed.

“We’ve been competitive all weekend long and the race simulations seem positive,” he said, “so it’s looking good for tomorrow.”