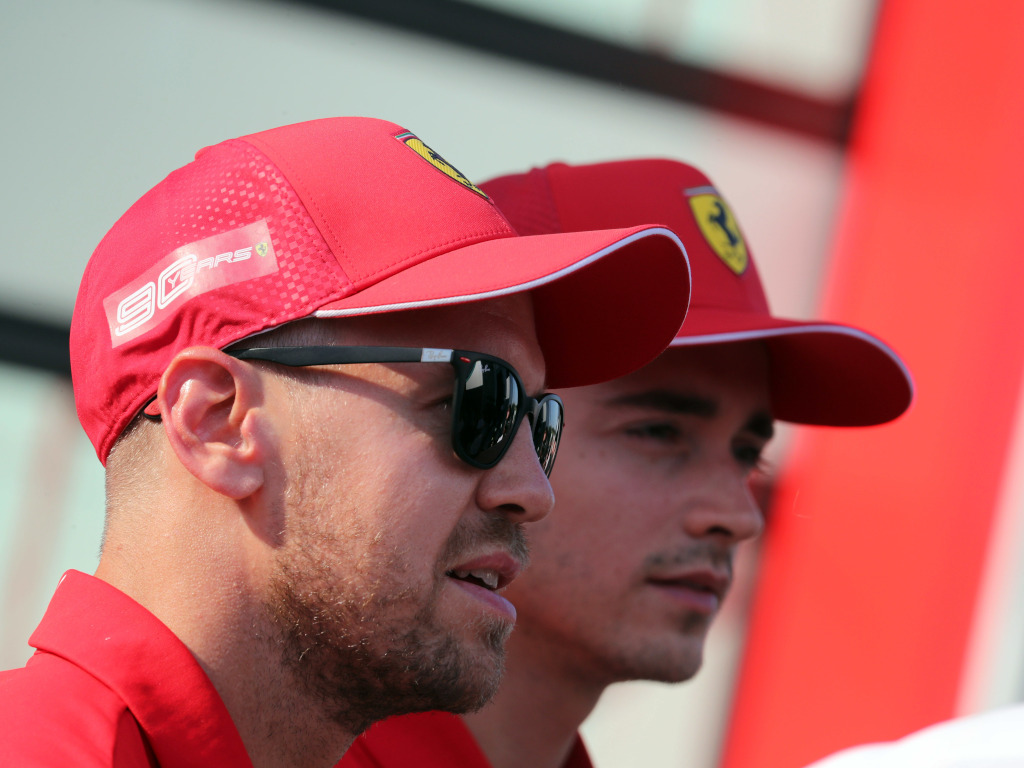 Charles Leclerc says his Ferrari team-mate Sebastian Vettel knows he shouldn’t have taken the left line after the pair collided in Brazil.

Ferrari’s challengers made contact in the closing stages of the Brazilian GP, leaving the Scuderia with a double-DNF when a double-podium had been very much within reach.

The team have spoken with both Leclerc and Vettel at their HQ in Maranello, and after looking back at the footage, Leclerc concluded that he and Vettel need to be less “aggressive” to avoid a repeat.

“We looked at it, and I particularly looked at it to try and understand how we could have made the things better,” he said during the driver press conference in Abu Dhabi.

“It was very unfortunate first of all because the touch was very small and it was a big drama after that, so that was a bit unlucky.

“As a team I think we should probably try to be a little less aggressive between each other for these things to not happen again.

Vettel and Leclerc have had various flashpoints throughout the 2019 campaign, but Leclerc says there have been no orders given for him to stop racing his team-mate.

That being said, he knows that both of them must reach a “compromise” regarding their on-track tussles to spare Ferrari of any further incidents.

“I think this doesn’t change the role, we will be able to race [against each other],” Leclerc explained.

“Obviously Seb and myself are very competitive. We both want to win but also we need to find the right compromise, we are racing for the same team.

“We need to be less aggressive towards each other, give a little bit more space for these things not to happen again.

“Of what I know this is the only thing that will happen at the next races, but maybe Mattia [Binotto, Ferrari principal] can go a little further into that.

“But apart from that I don’t think there is much we can do, obviously in the end the consequences were huge in the last race.”

It was a disaster for Ferrari in Brazil!😩@KarunChandhok takes a closer look at the collision between @Charles_Leclerc and Sebastian Vettel, that left Ferrari with two DNFs.💥

Who is to blame?🤔

As for proportioning blame for the incident, Leclerc said both he and Vettel were guilty, but that Vettel shouldn’t have moved over to the left and he knows it.

“We called with Seb and we tried to understand both of our situations,” said the 22-year-old.

“I think Seb probably shouldn’t have gone to the left, he knows it, and I probably could have done a better job of avoiding him going to the left.

“Both of us have a bit of responsibility, but I think the most important thing is that everything is clear with Seb now and we move forward.”

2019 has been a rollercoaster ride for Ferrari and all involved, but Leclerc is reveling in the opportunity ahead to develop his car for next season for the first time in his single-seater career.

“It has been a bit of a weird season,” he admitted.

“We started definitely not where we thought we would start after winter testing. It was very positive then we arrived at the first race and we were struggling quite a lot.

“But after that I think the progression was really good, Austin was a little bit weird, we still don’t really understand why we were so off the pace.

“But then in Brazil we were back to where we wanted, but we progressed quite a lot which I think is most important, and now I’m really looking forward to keeping this momentum for next year.

“It’s the first time in my single-seater career where I will stay in the same team for more than one year to another, so it should be an interesting challenge to develop the car.”