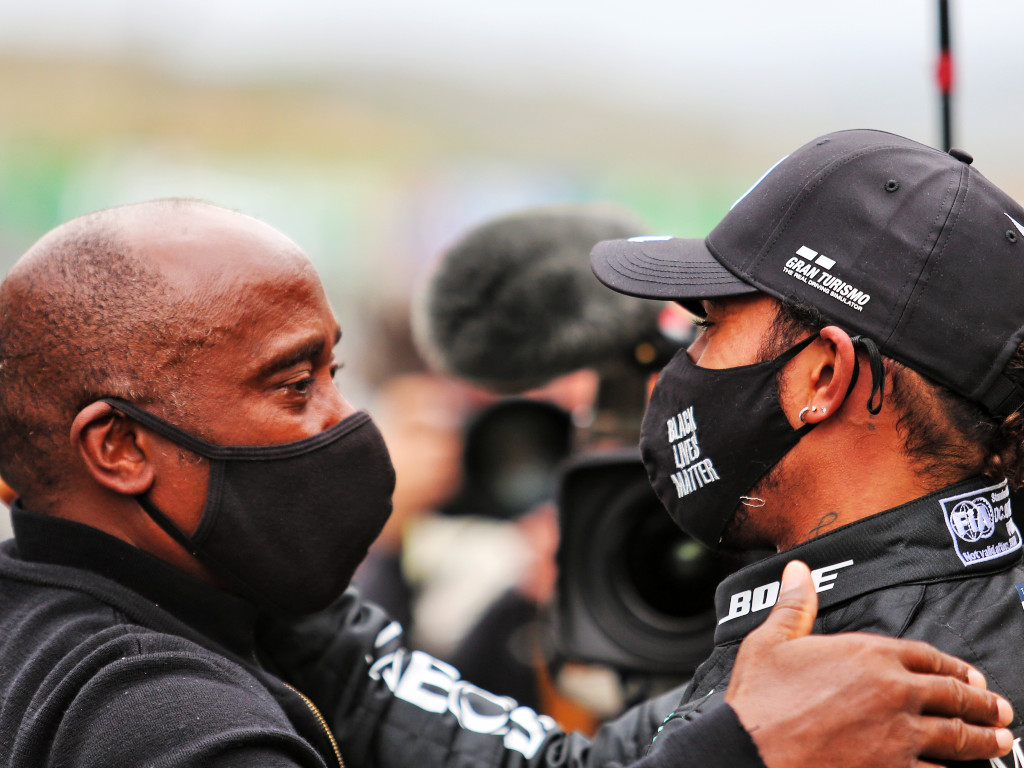 Lewis Hamilton didn’t have the words to describe how he felt after claiming a record 92nd win in Formula 1 at the Portuguese GP.

The Briton recovered from a difficult start at the Algarve International Circuit to repass team-mate Valtteri Bottas for the lead of the race, and from there pulled away at the front to claim victory by over 25 seconds.

And what a significant victory it was. With that Hamilton moved clear of Michael Schumacher and made himself the most successful driver in terms of race wins in Formula 1 history with 92.

“I owe it all to these [Mercedes] guys here and back at the factory, for just their tremendous work,” Hamilton told Sky F1.

“They’re continuously innovating and pushing the barrier even higher every year, the target, it’s been just such a privilege working with them, I’m very grateful for all the moments.

“The reliability has been absolutely incredible, thanks to Mercedes and to Petronas and all our partners who continuously are pushing.

“No one is sitting back on this success, everyone is pushing, pushing and pushing and that’s the most incredible thing to be surrounded by because it inspires you, and that collaboration, there’s nothing quite like it.

“I could only have ever dreamed of being where I am today. I didn’t have a magic ball when I chose to come to this team and partner with these great people, but here I am and what I can tell you is that I’m trying to make the most of it every single day.

“Everything that we do together we’re all rowing in the same direction and that’s really why you’re seeing the success that we’re having.

“It’s going to take some time for it to fully sink in, I was still pushing flat-out coming across the line, I’m still very much in race mode mentally, I can’t find the words at the moment.”

Hamilton struggled terribly for grip at the start of the race, losing out to Bottas and McLaren’s Carlos Sainz who led the opening stages of the Portuguese Grand Prix.

In hindsight Hamilton said he should probably have put up more of a fight against Bottas, but his decision to play the waiting game paid off in the end.

“Today was tough, there’s nothing quite like it, it was all about temperatures today and that’s something that with the setup I preempted,” he explained.

“They said it was going to rain straight after the race, but we got some spitting at the start.

“I had a good start but then going into Turn 7 I had a huge oversteer moment and I didn’t know what was next.

“So I really backed off massively and arguably I probably should have tried to defend against Valtteri, but I was like ‘I’ll come back later on’ and fortunately that’s what I was able to do.”

And later on in the afternoon cramp threatened to derail Hamilton as the six-time World Champion battled the effects of the demanding Algarve International Circuit.

“Oh yeah, It’s an incredibly physical sport but I had a cramp in my right calf,” he explained.

“I was lifting quite often down the main straight, it was about to pull, pretty painful.

“But I had to somehow get through it because it is what it is, you can’t lift the whole lap.”

Hamilton now leads the Drivers’ Championship by 77 points after also collecting the fastest lap bonus point to make it a perfect 26-point haul.