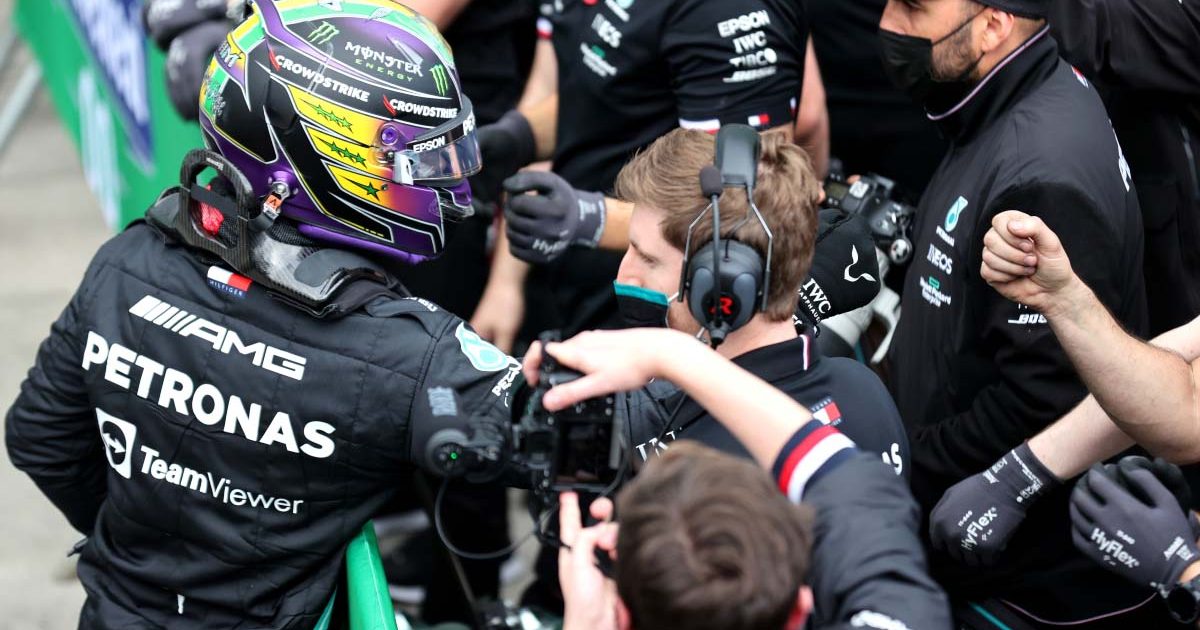 Lewis Hamilton was fastest in Brazil qualifying, but he appeared to think his grid penalty would be applied in Saturday’s sprint rather than Sunday’s grand prix.

A quirk of a sprint qualifying weekend means any pre-existing grid penalties are applied after the sprint and before the grand prix, as the sprint does not technically qualify as a ‘race’ due to it setting the provisional grid for Sunday.

Hamilton will take a five-place drop after Mercedes changed his Internal Combustion Engine at Interlagos, but this will happen on Sunday after the grid is fully set after sprint qualifying, meaning he will start the race no higher than sixth.

However, the World Champion is likely to start much further down the order as he was subsequently excluded from qualifying and made to start at the back for the sprint after the FIA investigated a DRS infringement on the rear wing of Hamilton’s W12.

“I loved today, for sure,” Hamilton told reporters after qualifying fastest for the sprint. “We’ve been working so hard to try and get this car right and it’s been tough.

“So to finally get the car feeling like it did today, it feels great – it’s just a testament to all the great work everyone’s doing in the garage, and also back home, just all the work that’s going back home to try and pull everything we can out from the car.

“Of course, the last two poles I’ve had, I’ve had a penalty. It’s a bit unfortunate to have a penalty tomorrow, but it is what it is and I’ll try and fight back from there.”

Regarding the penalty itself, Mercedes had been coy about whether or not Hamilton would take a new ICE ahead of the weekend, but the World Champion clarified when he was told about his latest penalty.

“I think it was yesterday,” he said. “I think right until the last minute they were trying to say ‘we’ve got to make a decision on whether we should be able to make it to the end [of the season], so it was a decision the team took. I trust their judgement.”

Hamilton beat Max Verstappen to P1 by a significant margin in qualifying, with the Briton almost half a second faster than the rest of the field at Interlagos on Friday.

He reflected on previous efforts to overhaul Red Bull in terms of raw pace and was pleased to see Mercedes succeed in qualifying, but is not yet sure if that will repeat itself on Sunday.

“I don’t know if that translates in the race, but I’ve been going from P3 and sitting there for the whole hour [in practice] trying to make the right set-up change and the anxiety you get is crazy,” Hamilton admitted.

“A lot of the times we get it wrong, I get it wrong, and today I got it right and the car was really nice to drive, so it was everything I wanted.

“I don’t know how we can go from one track where they’re half a second ahead to then being behind, but anyway, they’ll be very strong in the race tomorrow and I hope Valtteri gets a good start.”