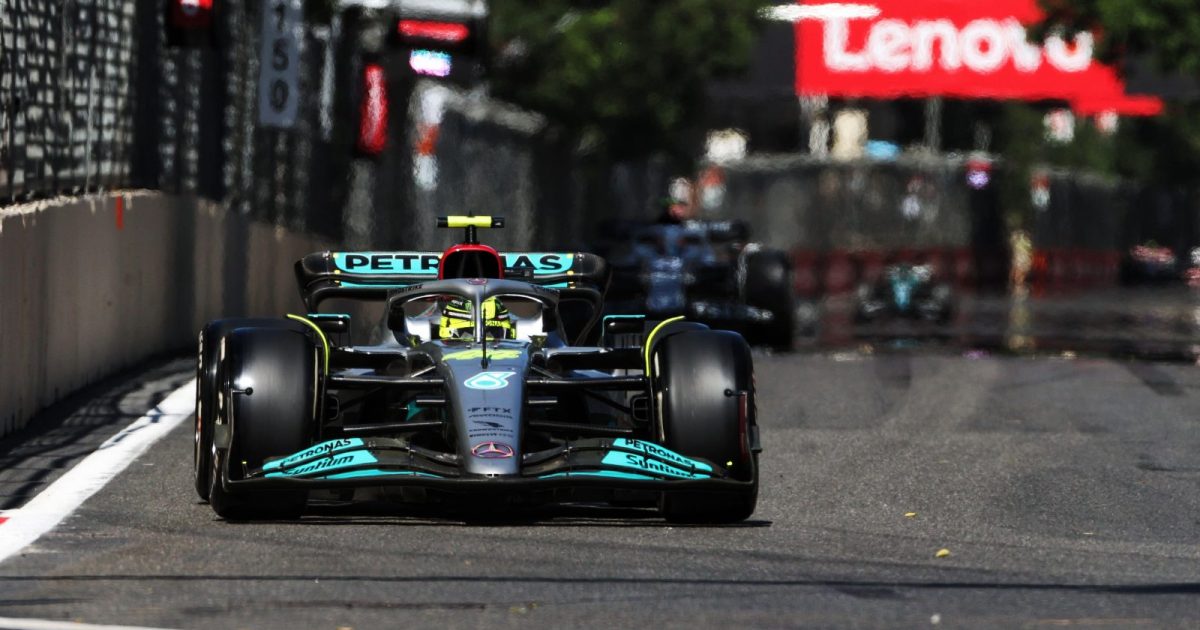 Lewis Hamilton has revealed the porpoising in his Mercedes was so bad in Azerbaijan he had to lift off at times to avoid hitting the walls.

Due it to being one of the quicker circuits on the calendar and with a 2.2km straight, Mercedes found the Baku circuit incredibly tough when it came to porpoising.

Despite third and fourth place finishes, largely as a result of both Ferraris retiring, the team lost pace due to the bouncing and now Hamilton has admitted he was forced to lift off at times for fear he would hit the wall.

The seven-time former World Champion, who was seen hobbling away from his car after the race, said it was a “strange experience” to be driving and feel worried about keeping the car out of the wall.

“There were a lot of moments when I didn’t know if I would make it,” said Hamilton, as reported by Motorsport.com. “Just whether I was going to keep the car on track because I don’t know if you saw it, I nearly lost it in the high-speed several times.

“So the battle with the car was intense. And then at the end, the last 10 laps to the flag, I was just having to go internal, like ‘you can do this, you’ve got this, just bear with it’.

“The thing was bouncing so much sometimes. There were so many times I was nearly going into the wall. So that was a concern – safety-wise at 180mph, smashing into the wall…I don’t think I’ve really ever had to think about that too much as a racing driver.

“You don’t really ever think about keeping it out of the wall at that high speed. A very, very, very strange experience.”

Even when it’s painful, still we rise. Thanks for the love, see you all next week ❤️

After the race, his boss Toto Wolff apologised to Hamilton for the “sh*tbox” of a car they are currently providing him with.

The team tried a different spec on Hamilton’s car this weekend but instead of resolving the problem, it produced what the driver called “the toughest race I’ve ever experienced”.

“I lost three and a half tenths to him just on the straights. I had an experimental part on my car and a different rear suspension. So ultimately, it’s the wrong one.”

Hamilton also said he had been using cryotherapy for his recovery and was unsurprised Russell had not felt such pain because he is 10 years younger.

“When you go in there for four minutes it’s bloody cold, and you just have to go internal and say you can. It’s the same sort of thing, just kind of quieten down and just grinning with it.

“I have to think of all the people that rely on me to get those points. So that’s really what I was focused on. But this is definitely the worst. For me, I haven’t had it this bad [as] this year.

“George doesn’t have any back problems today. But his is like a 10 years younger back than mine!”