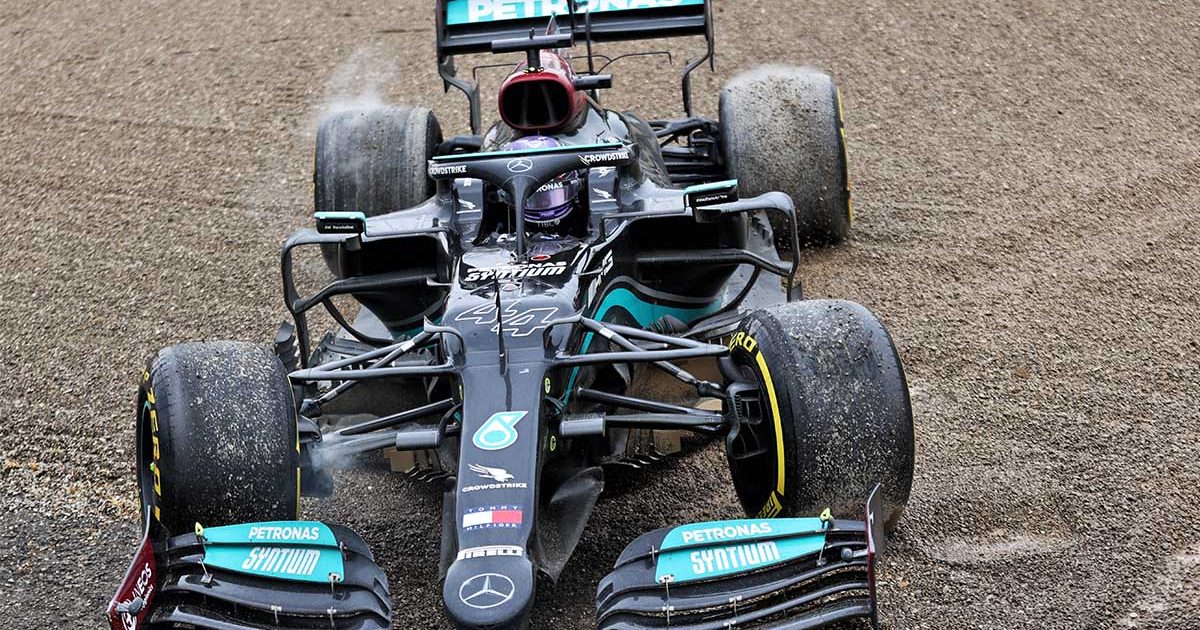 Sir Lewis Hamilton said he was grateful to just finish the race and finish P2 in Imola following his “first mistake in a while”.

Hamilton was on pole position when the lights went out at the Emilia Romagna Grand Prix, but he quickly fell behind his closest competitor at Bahrain, Max Verstappen, who eventually went on to win the race in Italy.

It was Verstappen who Hamilton was chasing and it looked as though he had a good chance of catching up with the gap between the two closing, but to get towards the Dutchman he had to go through a lot of traffic.

While he tried to make his way through the cars who were a lap behind the seven-time World Champion, Hamilton lost control of the W12 and his front wing hit the barriers trying to negotiate his way of the gravel, but did just about manage to keep his engine going and reverse back out onto track, which was soon red-flagged after the huge collision between Valtteri Bottas and George Russell.

Speaking to Sky F1, Hamilton said: “First congratulations to Max [Verstappen], he did a fantastic job today, just solid work from him, and also to Lando [Norris, P3], what an awesome job and so great to see McLaren back up there.

“On my side it was not the greatest of days, first time I’ve made a mistake in a long time, but I’m grateful I was able to bring the car home still.

“There was only one dry line and I guess I was in a bit too much of a hurry to get by everyone and I came onto the inside and I could see it was wet and I was trying to stop but the thing wouldn’t stop and sent me off.

“Bit unfortunate but I’m really, really grateful that we got to get going again and to get some points for the team was really important today.”

Hamilton slides off into the gravel, and hits the front wing#ImolaGP 🇮🇹 #F1 pic.twitter.com/7BBN3JN3IS

A contentious collision between two other drivers with a connection to Mercedes, Valtteri Bottas and George Russell, brought out the red flag and that gave Hamilton a great chance of making his way back through the field from P8, whereas without the stoppage he was a full lap behind the leader.

Asked whether he was worried about falling behind in the standings, Hamilton said: “I wasn’t thinking about it. I was just trying to get over the gutting kind of feeling it is when you make a mistake and just moving on from it and just learning from it real quick.

“You don’t have time to dwell on it so that’s what I did, get back into racing spirit and, yeah, I didn’t know whether or not we’d be able to overtake because again off line was going to be wet but [I] still had some really fun battles with all the guys.”