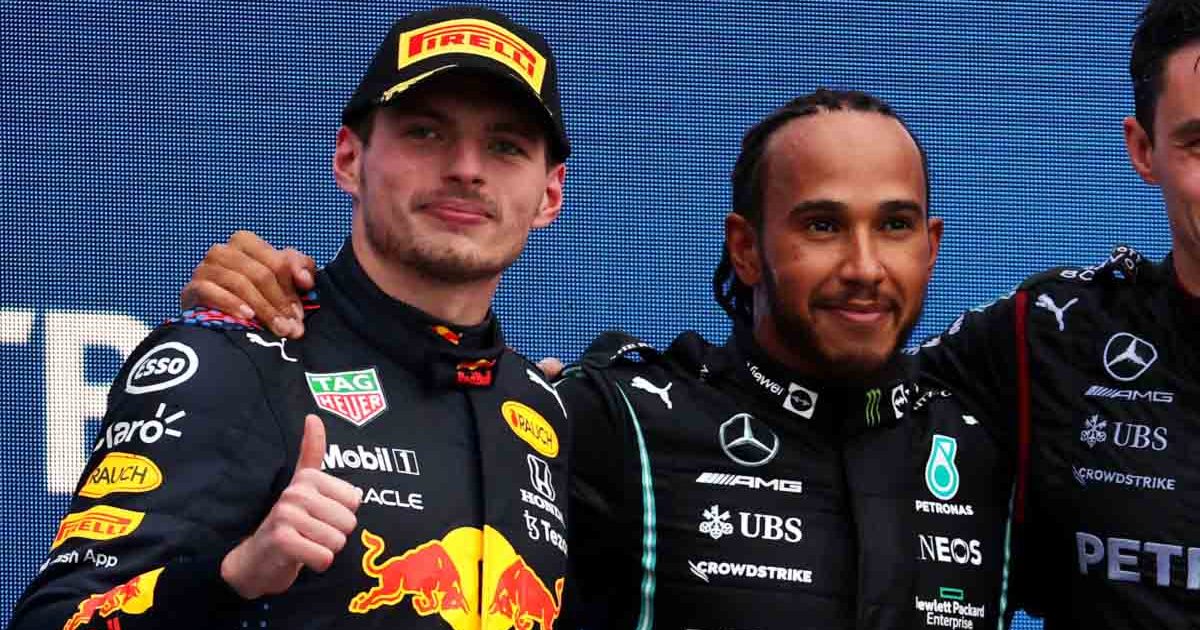 Lewis Hamilton praised Red Bull’s “huge effort” in Russia, but was left frustrated after Max Verstappen was able to close right back up to him.

The Mercedes driver took an unprecendented 100th career victory in Formula 1 in dramatic circumstances in Russia, having made his way through the field to close up to Lando Norris in the lead.

The weather would play its part, though, as rain fell and Hamilton’s team opted to swap him onto intermediate tyres, which ultimately helped him win the race.

Red Bull and Verstappen did the same, however, and his World Championship rival was able to leapfrog other drivers who were barely keeping their cars on the road on dry tyres, to take an unlikely P2 finish having started last on Sunday.

As a result, only two points separate the two title protagonists at the end of the race, and the seven-time World Champion said Red Bull will be difficult to beat for the rest of the season.

“To come from last to second is a huge effort. The Red Bulls are so fast,” Hamilton told Sky Sports F1 after the race.

“They’ve been quickest pretty much most of the year. They’ve done a great job. To come from last, have a penalty, two penalties…whatever it was, and come back to second, that is mega damage limitation.

“We’ve got to see what we can do moving forwards. It’s going to be tough to beat them, but we’re going to give it everything.”

Lando Norris had led for the majority of the race on Sunday, but Mercedes’ call to override Hamilton’s opinion and bring him in helped him to victory – and he admitted it was a “bittersweet” feeling to see McLaren miss out on victory.

“Lando did such an amazing job, he had incredible pace,” Hamilton said prior to heading up to the podium.

“He is doing such a great job for McLaren, and it’s very bittersweet to see my old team ahead, them doing so well, obviously they won the last race, so they are doing fantastic powered by Mercedes. It’s good to see them united again.

“The team [Mercedes] made a great call right at the end, I didn’t want to let Lando go and of course I didn’t know what the weather was doing, incredibly grateful to all these men and women that are here and back at the factory.”

Prior to overtaking his young compatriot, Hamilton admitted he found it tough going to try and overtake the McLaren ahead. He was kept at arm’s length behind Norris, who had managed to keep the charging Mercedes out of DRS range as the race headed into the closing stages.

With Verstappen able to capitalise too, Hamilton described the Red Bull’s finishing position as a “dream result” for them.

“Then the rain came and it was very opportunistic, and as I said the team did an amazing job.

“Otherwise there is nothing I can do about who is behind me, that is a dream result for Max, but I’m grateful for the points.”