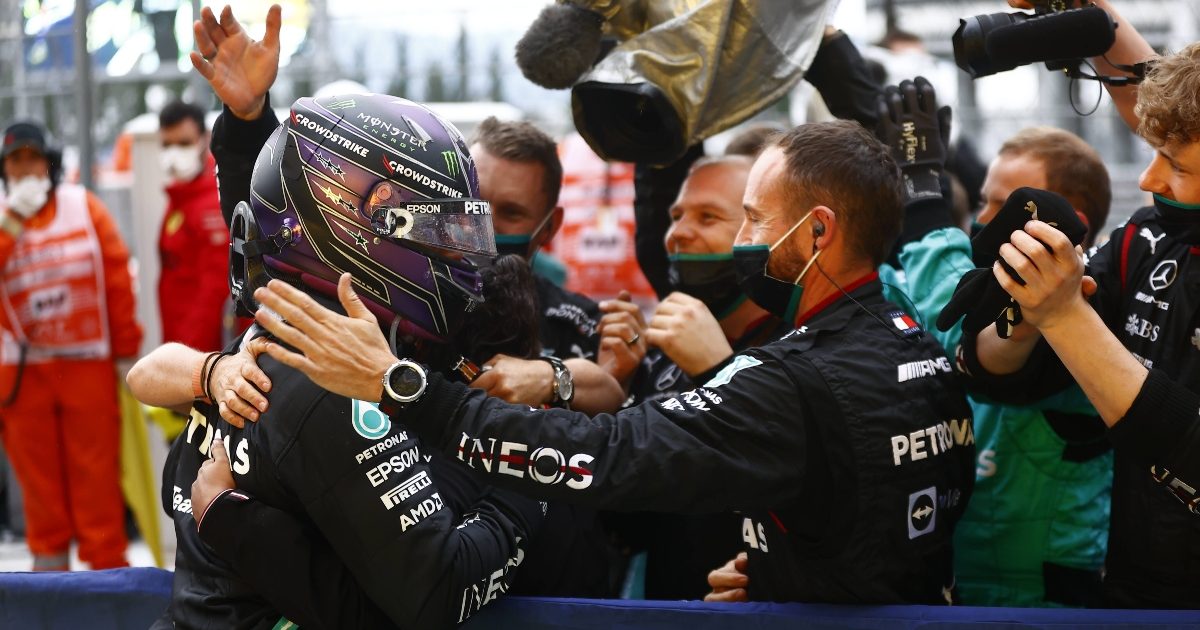 Lewis Hamilton says he can’t take any credit for his team’s “amazing decision” to pit him towards the end of the Russian Grand Prix.

As the race in Sochi approached its ending, it looked like Hamilton was narrowly going to miss out on his 100th victory as he ran close behind the McLaren of Lando Norris.

However, chaos ensued when it started to rain, and the Mercedes driver ended up in the lead after eventually following his team’s advice to pit for the intermediate tyre rather than stay on slicks as Norris tried to do.

Both were told to pit, but the McLaren driver chose to stay out instead, feeling that he could make it to the end as, unlike his compatriot, he wasn’t told the rain would get any heavier.

It was a call that ultimately earned Hamilton the win as Norris went off soon afterwards before having to pit himself, thus dropping down to P7.

Today we won our 100th race! Words can’t describe how it feels to make history with this team of hardworking, driven and passionate human beings. We must keep fighting, keep rising. We’ve got a championship to win #LH100 pic.twitter.com/e2oQHVAVDi

The seven-time World Champion doesn’t think he can take any credit for following the orders he was given though, instead heaping all of the praise on his team.

“Yeah, firstly I can’t take credit for that amazing decision, that was the team’s,” he said in the post-race press conference.

“For me, I was very much in no-man’s land for a long time in terms of… I didn’t really know where I was in the race.

“I had no idea how far Lando was ahead. I was just trying to set the best time every lap. Once I got past one of the McLarens in my second stint, getting past people, chasing down Lando.

“They were incredibly quick all of a sudden. He was doing a really great job. Just in those last moments, it was slippery in 5 and a little bit in 7 but then everywhere else grip was pretty good.

“Lando went off I think in 5 on one lap and I was like ‘OK, OK, stay out, it’s most likely going to happen again, I’ll try to catch him out’. Then they called me in and I was like: ‘Yeah, but he’s right there!’ I only had three laps to catch up 24 seconds, so it was like ‘no way’.

“So I wasn’t convinced the first lap. The next lap it rained more and I was definitely more convinced then, so I came in.”