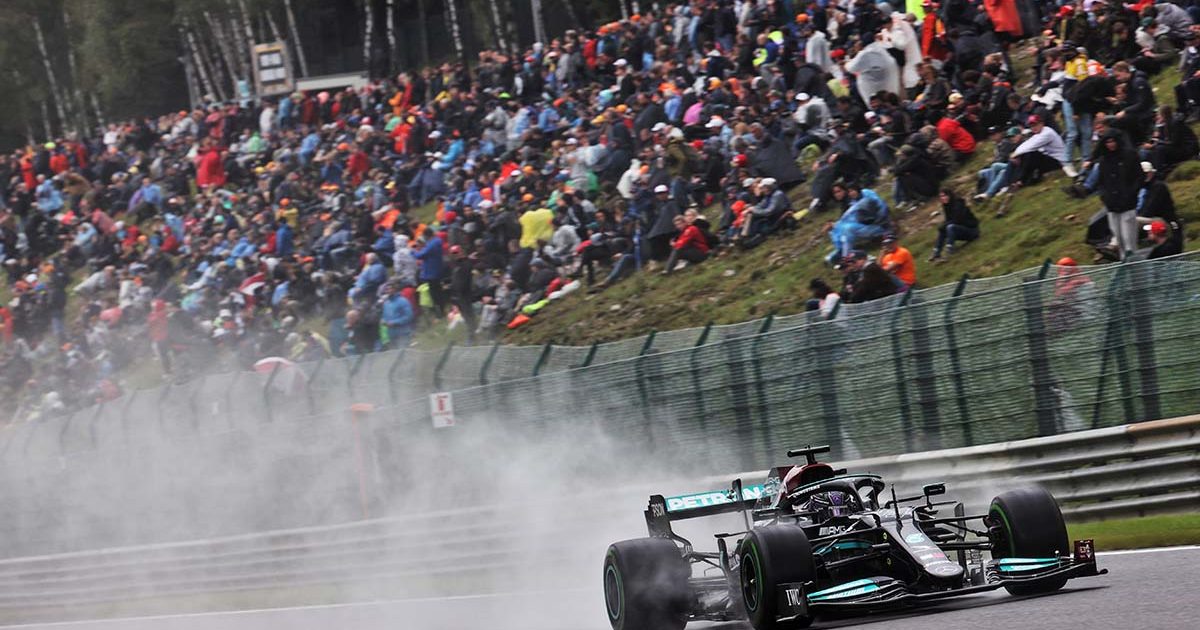 Martin Brundle has called for FIA rules surrounding wet conditions to be simplified, and suggested ways around the confusion seen at Spa on Sunday.

In rarely-seen circumstances at the weekend, the Belgian Grand Prix was delayed due to the weather conditions, which did not improve and the cars were sent out for processional laps behind the Safety Car, which then provided a classification for the race.

The way the race played out has sparked plenty of debate within Formula 1 around how the rules are policed. Sky analyst Brundle feels the current regulations were adhered to, but that they need significant changes.

“It must be said the whole process did follow the rules, it’s just that the rules are unfathomable and need to be simplified,” he said in his latest Sky Sports F1 column.

“The trouble is in Formula 1 that every rule change always has unintended consequences and opportunities, so they end up being so convoluted.

“Every so often they need a reset and that moment is here.”

Drivers throughout the field complained of having next to no visibility while going around the track, and Pierre Gasly believes structural changes to the cars need to be made to allow for better vision behind the car in front, in wet conditions.

With the capabilities of Formula 1 cars to clear water on a track, Brundle suggested a solution whereby the cars would take to the track in safer conditions and clear standing water while completing laps of the race – similar to how they race at Le Mans.

“We could have initially left the cars out on full course yellow VSC Virtual Safety Car to help clear the track of water without being so confined by Safety Car speed, and at least the race would have been clearly under way with cars and tyres which can lift up 60 litres of water per second at high speed,” he said.

“We regularly trust both the leader and the following pack on Safety Car restarts in all types of conditions.

“The problem is that drivers will be under different pressures to start the race depending on their car and grid position. The actual Safety Car can always be briefly reintroduced for a final FIA sign off before letting the cars go.

“Le Mans has a system of ‘Slow Zones’ to control parts of a track which is approaching double the length of Spa.

“With over 60 cars and 180 drivers of varying ability in the race these work largely fine, although how you enter and depart the slow zones can generate some advantages which F1 controls could easily nail down.

“In this way, if the problem is Eau Rouge and the Kemmel Straight then make a slow zone around that, still enabling the cars to retain sufficient heat elsewhere on the lap. It keeps the show on the road and helps avoid puddles forming.

“Just covering an area with double waved yellow flags in F1 doesn’t work as the drivers are still at high speeds with different interpretations of what is a suitable lift of the throttle.

“There’s not much you can do with two-metre-wide cars, fat open-wheel tyres and open cockpits to help visibility, other than simply slowing down which poses risks with dramatic closing speeds.

“The absolute bottom line is that if the cars are aquaplaning on top of the water and the drivers cannot begin to see where they are going, there’s no skill or bravery involved, it’s simply a question of luck and waiting for the inevitable crashes and hoping nobody is hurt or killed.

“And that is where we found ourselves on Sunday.”