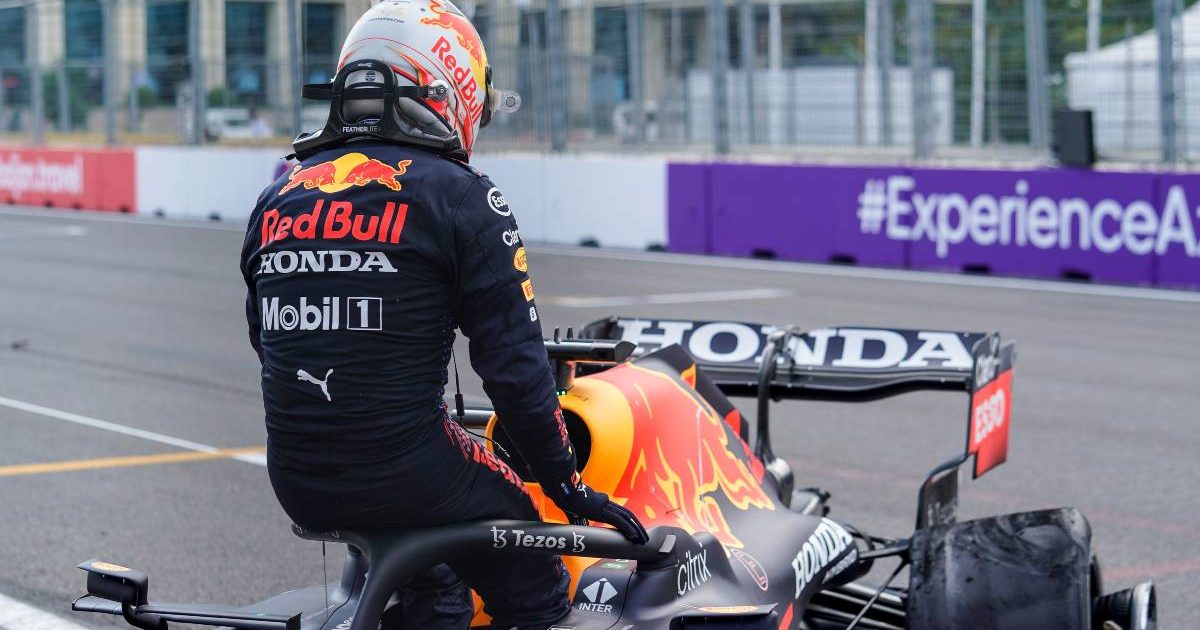 The Dutchman was coasting to victory in Baku, all set for a second consecutive street-race win, when a tyre failure on his Red Bull sent him crashing at high speed into the barrier on the long pits straight.

The second such incident of the afternoon, it caused the race to be stopped and, at the restart, Verstappen’s World Championship rival, Lewis Hamilton, looked in good position to pass the other Red Bull, of Sergio Perez which was leading, for the win and a 25-point haul.

But from a standing restart, Hamilton did not brake in time at Turn 1 and shot up the escape road, eventually coming home second last of the 16 finishers to ensure the Drivers’ title standings remained unchanged in the top two positions following a 0-0 draw.

It was exactly the news Verstappen had wanted to hear while he was undergoing medical checks to ensure all was fine following his boneshaking crash.

“I was laying on that bed, they were checking my blood pressure and suddenly my phone was vibrating and I thought ‘what’s going on’ because I could hear the cars, of course,” explained Verstappen to Sky F1.

“Then I was done and allowed to leave and saw on my phone that Lewis had a problem in Turn 1. My blood pressure, even with that text message, was absolutely fine!”

The title pendulum could have swung either way throughout the afternoon in Baku but eventually remained exactly where it had been, with Verstappen one point ahead.

“We lost a lot of points, we could have opened up the gap in the Championship, so to have this happening, especially so close to the end, is very frustrating,” added the 23-year-old.

“It’s a shame. I wanted to open up the gap a little bit more before we go back to those kind of [non-street] tracks. But we are still leading the Championship, which I didn’t expect when we hit that wall.”

💔on my own race… But happy for the team and a huge congrats to @SChecoPerez on the win 💪 The car, pit stops and strategy were amazing again, thanks to @redbullracing. Not much more to say at this time other than we’ll keep pushing until the end ⚔️ 🇦🇿 #AzerbaijanGP pic.twitter.com/Cwxp76LVZO

Both Verstappen and his team boss Christian Horner said there had been no indication the tyre failure was about to happen.

“I didn’t feel anything up until the moment when I suddenly went [into the barrier],” said Verstappen. “The tyre just blew off the rim and it’s not a nice impact to have. It’s quite a dangerous place to have a tyre blowout at that speed.

“But all fine with me, the car not so much. Until then I think we had a very strong race. I was basically matching the lap times I had to do and we were fully in control. Of course it’s very disappointing what happened.”

Horner, for whom it was a day of mixed emotions as Perez claimed his first victory for Red Bull, said: “I think I’ve aged about 20 years! We were staring down the barrel of our first one-two since 2016, everything in control.

“GP [race engineer Gianpiero Lambiase] had just checked in with Max, all okay, and then boom, the tyre went.

“At the moment, we don’t know why. It looked like the wear was all in good shape, so whether it’s debris or something has happened…it’s a big place to have an accident but thankfully he’s okay.

“We were managing the tyre pretty well and you could see all the wear pins and all that was going well. You could see it suddenly deflated – whether it’s a bit of debris from the shunt earlier [Stroll’s] you just don’t know.

“So, I think, let’s get the tyre back and look at it fully. But obviously feeling at that point like the world’s just dropped from under us.”