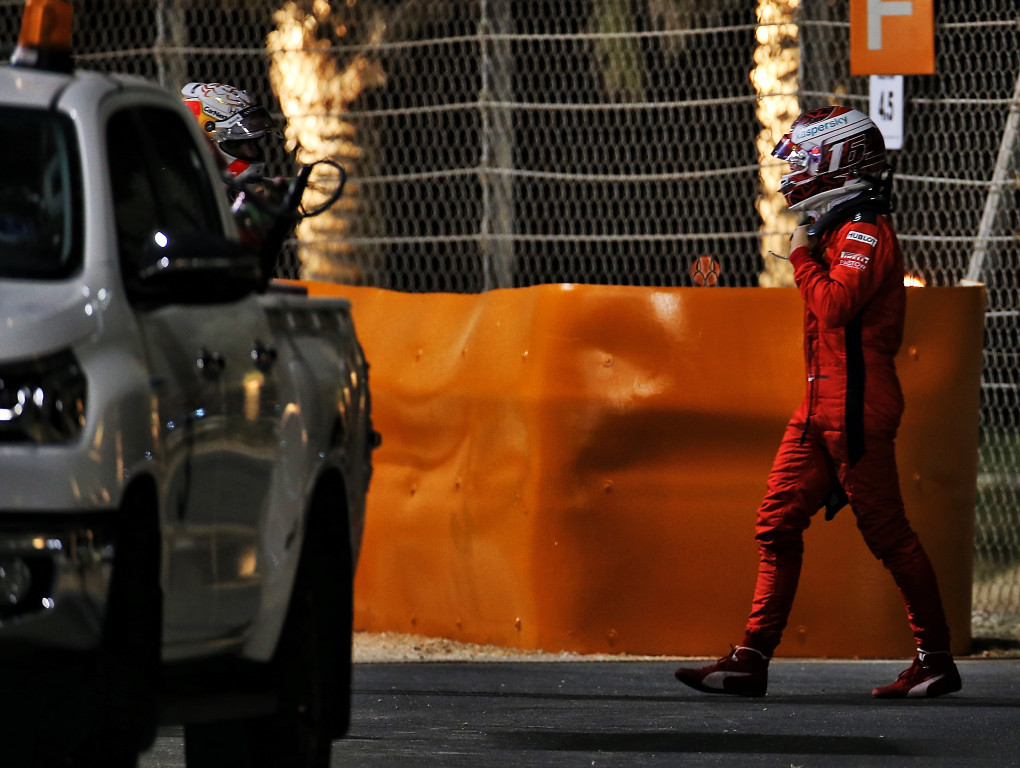 Max Verstappen was less than impressed with Charles Leclerc’s role in the crash that ended both of their involvements in the Sakhir GP.

George Russell was able to jump Mercedes team-mate Valtteri Bottas off the line to take the lead of the race at Turn 1, and the Finn was then left with the attention of Verstappen, Leclerc and Sergio Perez.

Heading in to Turn 4 Verstappen would take a cautious approach, something Leclerc didn’t do as a late lunge down the inside of Perez caused the pair to collide.

But while only Leclerc picked up race-ending damage at that moment, Verstappen was forced to take evasive action and go well off the track, in the end running out of space and also steering lock.

From there it was into the barrier with the RB16 suffering terminal front-end damage.

And it’s safe to say Verstappen was clear on who he blamed for the incident, calling Leclerc’s lunge “stupid”.

“My start was okay, but then the cars around me were super aggressive. I just tried to stay out of trouble,” he told Ziggo Sport.

“Valtteri had a moment in turn two and we came next to each other. Then I saw that the gap was getting smaller and I didn’t want to have a Singapore 2017 scenario. So you brake earlier to stay out of trouble.

“Then all of a sudden Charles arrived very late on the inside. That was an unnecessary risk. We’re all in front, you can’t suddenly gain two places there. That he passed me is fine, that can happen, but to try and outbreak Checo was very optimistic.

“I think he was too enthusiastic. It was totally unnecessary. There are now two cars in the wall and one at the back. I just think it was stupid and it shouldn’t have happened.”

I tried to stay out of trouble, but trouble came to me. Such a shame #SakhirGP 🇧🇭 pic.twitter.com/NASh72e1WG

Leclerc accepted blame for the incident and was duly handed a three-place grid penalty for the season-ending Abu Dhabi Grand Prix.

“I was in fifth I think and I was side-by-side a bit behind Max and tried to overtake him into Turn 4,” he told Sky F1.

“I had seen Checo but I expected him to go around the outside of Valtteri and stay there but I think he decided to come back on the inside and I was there and then it was too late to slow down.

“I don’t think it’s a mistake from Checo, I’m not putting the blame on Checo if there is anyone to blame today it’s me.

“But I’d say it’s more unfortunate than a blame.”