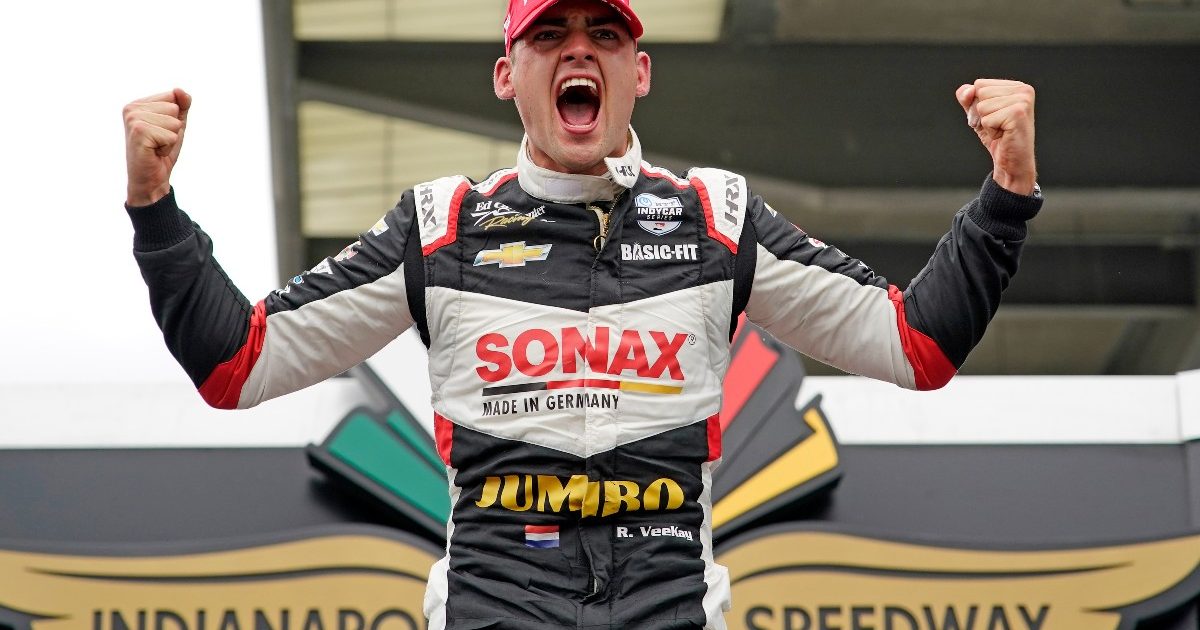 It seems Max Verstappen may well hold the key to any future Formula 1 involvement from Rinus ‘VeeKay’ van Kalmthout.

VeeKay is quickly becoming one of the hottest young prospects in IndyCar, claiming a first race win in the series in 2021, winner of the GMR Grand Prix around the Indianapolis Motor Speedway’s combined road course.

And it seems that now more than ever, the worlds of IndyCar and Formula 1 are moving closer together in terms of opportunities for drivers to move either way.

Ferrari junior Callum Ilott is preparing for his first full-time IndyCar season in 2022, while fellow ex-F2 racer Christian Lundgaard will mark his debut by also contesting the upcoming IndyCar campaign.

Romain Grosjean, who left Formula 1 at the end of 2020 to move to IndyCar, has become a huge advocate of the category ever since.

And the door between both series has not closed yet, with Arrow McLaren SP driver Pato O’Ward having tested McLaren’s MCL35M at the 2021 Abu Dhabi Young Driver Test. He remains very open to a future drive in F1, should the opportunity arise.

In addition, Colton Herta was heavily linked with a move to F1, when Michael Andretti’s interest in taking over the Sauber-run Alfa Romeo team emerged in 2021.

When I was a kid, I wouldn’t have thought to say on my 20th: I’M AN INDYCAR RACE WINNER! pic.twitter.com/iTcM4gnQIT

Next to be pressed on a possible move then was VeeKay, but unlike O’Ward and Herta, he is not currently so warm on the idea of racing in Formula 1.

But if he was team-mate to his compatriot Verstappen, or in a car fast enough to compete with him, then that may change his mind.

“If I get the chance to become Max Verstappen’s team-mate, or maybe Max Verstappen’s competitor at a top team, then I will certainly think about that,” said VeeKay when Ziggo Sport asked whether Formula 1 was on his agenda.

Formula 1 is certainly not a goal that he is working towards currently though, instead being competitive is the aim.

So if that means “20 years” of title battles in IndyCar, he will happily accept.

“But I’m not working on that at all right now,” the Dutchman continued.

“If I can drive in IndyCar for the next 20 years and compete for the titles, then my life is more than complete.”

The IndyCar season begins on Sunday 27 February with the Firestone Grand Prix of St. Petersburg in Florida.