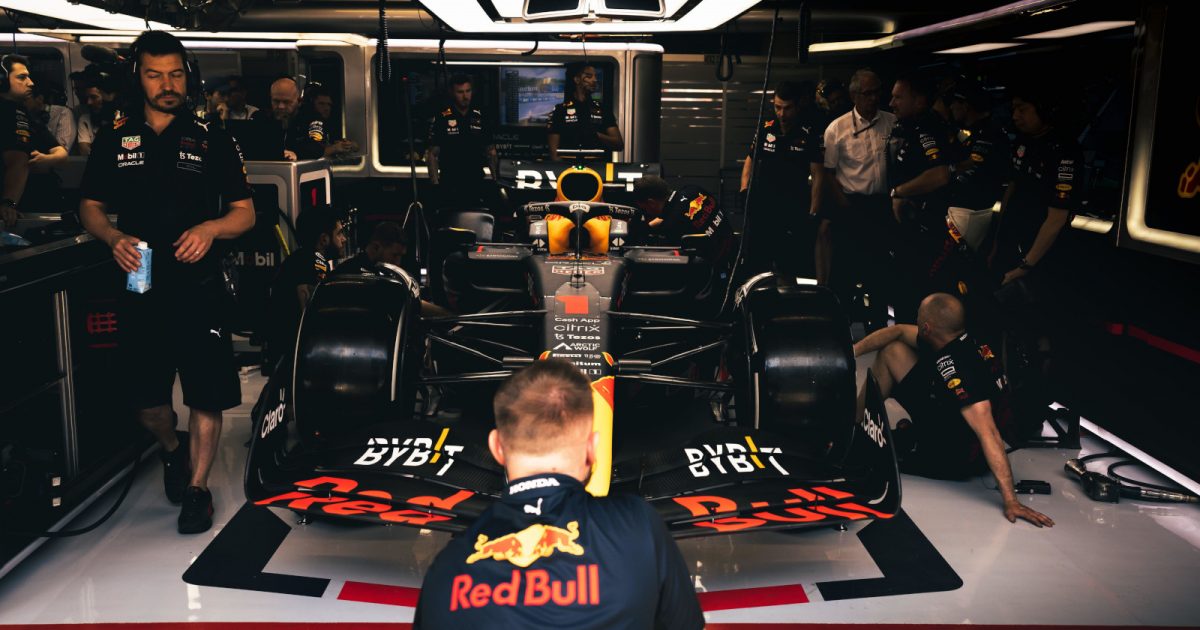 Max Verstappen was “eight seconds” away from a pit lane start as Red Bull, it has been claimed, needed to bring his fuel up to temperature in Spain.

With the Spanish Grand Prix taking place in swelteringly hot conditions, Red Bull are suspected to have cooled the fuel for both RB18s below Sunday’s minimum of 25°C.

That meant they had to bring it up to temperature before either car could leave the pits, which turned into a race against time.

According to Auto Motor und Sport, the “fuel temperature in the two Red Bulls did not meet the prescribed value when the pit lane was opened 40 minutes before the start” of Sunday’s race.

As such while their rivals did practice laps on the way to the grid, Verstappen and Sergio Perez sat in their respective garages as Red Bull ran their cars’ engines to raise the fuel temperature.

Fuel temperature is decided by the ambient temperature two hours before the race minus 10 degrees.

But given that Honda are said to have problems in hot races if the fuel temperature rises too much, AMuS reports that Red Bull prefer to “cool down the fuel as much as possible beforehand because with a lower starting value it stays cooler over the entire race”.

Verstappen was the last driver to make it onto the grid, leaving the pits with “eight seconds” to spare.

The FIA, though, told The Race that Red Bull’s fuel temperature was always above the legal minimum, something Ferrari doubt.

Ferrari team principal Mattia Binotto said: “I can imagine it [the late pit exit] was down to the fuel temperature.

“They need to be a maximum 10°C below the ambient. It should be at all times during the event. So not only when the car is going out but when the car is in the garage itself.

“I can only trust the FIA.

“It’s difficult to understand that they were maybe heating up the fuel through a fire-up because it would not explain… as I said, it should be [legal] at all times.

“I can only trust the FIA and I’m pretty sure they are comfortable. They checked it. And maybe that’s not the right explanation as well, you should ask them.”

But Red Bull themselves attribute the last-ditch run to the end of the pit lane down to trying to fix issues with their faulty DRS system for as long as possible, and the team subsequently told PlanetF1 that “we had no fuel issue and fully complied with all regulations.”

Verstappen won the Spanish Grand Prix, leading home Sergio Perez in a Red Bull 1-2, to take the lead in the Drivers’ Championship.

He is six points up on Charles Leclerc after the Ferrari driver recorded his first DNF of the season, out of the race with a power unit failure.