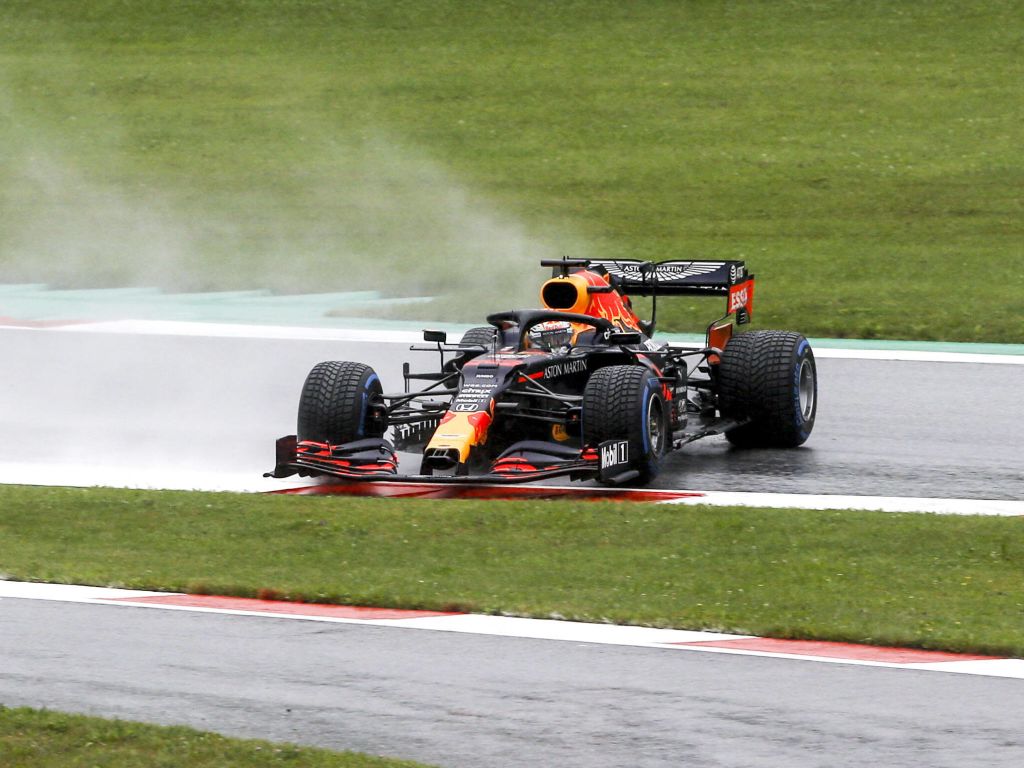 Max Verstappen said it was Sebastian Vettel going into the pits which caused him to spin on his last Q3 lap at the Styrian GP.

Lewis Hamilton was in a class of his own during the rain-soaked hour of qualifying, putting his W11 on pole over 1.2s ahead of Verstappen.

But the Dutchman looked to be in with a shout of pole on his last flying lap, that was until he spun coming out of the penultimate corner.

Vettel had just veered off into the pits before that spin, and Verstappen said that is what caused his oversteer and ultimately to lose control of the RB16.

Though he didn’t think he was going to beat Hamilton’s time anyway.

“I guess it was Seb going in the pits – you can’t see even the colour of the car [in the rain],” Verstappen said in the post-qualifying press conference.

“I understeered because of it and then I went a bit wide – like I came onto the kerb on the exit and then I lost it.

“So, I had a four-wheel drift into the last corner but, anyway, it was not good enough a lap to beat Lewis.”

Pushing it to the MAX in the hunt for that pole position! 👊 #AustrianGP 🇦🇹 #F1 pic.twitter.com/m4Trl6ZpJr

The rain eased off allowing for qualifying to start at a delayed time, but it intensified again during Q3, at which point Verstappen said there was a huge amount of standing water around the Red Bull Ring.

“You couldn’t see a thing, you always had to drop [and] leave a bit of space so you could do a lap.

“So basically in the whole of Q1 I didn’t really have a free lap, but still it was alright. Also the track I think was not too bad to drive on.

“It’s just with these cars, with these big tyres on it’s incredible – you can’t see a thing when you are within six seconds of the car ahead of you.

“But it was all going well – same in Q2 actually – I think it was all pretty good.

“But then towards the end it started to rain a bit more and immediately sector two was becoming more tricky.

“So I couldn’t really improve my last two or three laps – but it was good enough of course to go to Q3.

“And then Q3 was very difficult – for me at least. Just a lot of standing water.

“I lost quite a lot of grip and it didn’t feel as good as it did in Q1 and Q2 but still of course to be second is alright.”

Alex Albon meanwhile couldn’t match his team-mate’s time and will start the race down in P6, behind Carlos Sainz and Esteban Ocon as well Verstappen and the Mercedes’.

The Thai driver says that he could have made the top three if not for a mistake on his final lap.

“Otherwise, I think we could have been top three, so it’s a bit of a shame, but it is what it is.

“[The car was] okay. Yeah, it was okay actually. There was a bit of aquaplaning on the last lap, but otherwise not much to report on.”