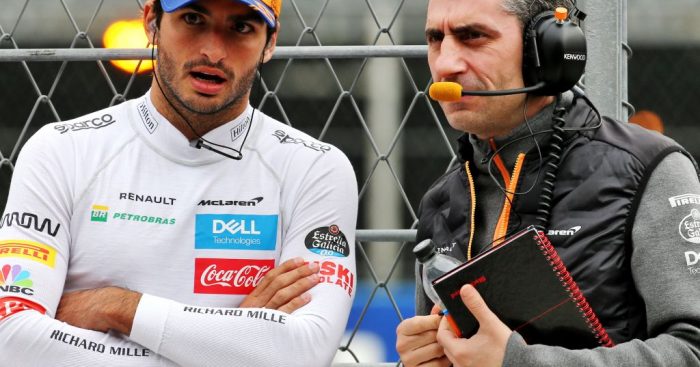 McLaren CEO Zak Brown believes the team have made great strides forward in 2019, but reliability remains their “weak spot”.

The Woking outfit look set to land P4 in the Constructors’ Championship ahead of Renault with two races to go, but the current margin of 38 points could have been far greater if it wasn’t for several notable reliability issues.

Lando Norris has suffered the worst of it – The 20-year-old retired from P5 at the Belgian GP on the last lap with Carlos Sainz’s DNF making it a double retirement, while Norris was again cost a strong haul of points in Mexico by a wheel problem at his pit stop.

So looking to the future, the clear area of improvement for McLaren in Brown’s eyes is reliability.

“Launches, we were floating around first, second best, we were sixth, seventh best.

“That has probably been our weak spot this year.”

But perhaps the biggest positive for Brown has been the performances of both Sainz and Norris, as well as the relationship they have developed in their first season together.

“I’m very pleased with both drivers, I think everyone is impressed with how they have raced,” he said.

“Lando in particular has not made the level of rookie mistakes that you would expect.

“If you look at Leclerc, his first year, he’s had one incident in Spain, which was kind of a racing incident, so he’s driven extremely maturely, which I think is very impressive for a driver of his age.

“He’s been very fast, the drivers are I think 9-9 in qualifying, which is exactly what you want.

“Make no mistake about it, while they get on very well, they’re extremely competitive with each other, but in a very healthy way, so I’m really pleased with our driver line-up and their pace.”

Sainz joined McLaren for the 2019 campaign after a season and a bit with Renault, and the Spaniard said that for him, McLaren was “love at first sight”.

“What sold me on McLaren was, first of all, the connection with Zak and how much this team wanted me to join,” he told Yahoo! Sport.

“As a driver, it’s very important to feel at home and feel that the team wants you. I’ve always felt at McLaren it was pretty much love at first sight since we started talking.

“It was very important for me, after the Renault and Red Bull periods where I never felt fully at home, that I went to a team that wanted me and that I could show my talent, so that was a big, big part of it.

“Then when I saw the restructuring going on inside McLaren, I realised how realistic they were about their chances, and how honest they were about why they had been so poor in recent years.

“I also saw a team in the making and wanting to move forward, which is exactly what I needed at the time.”