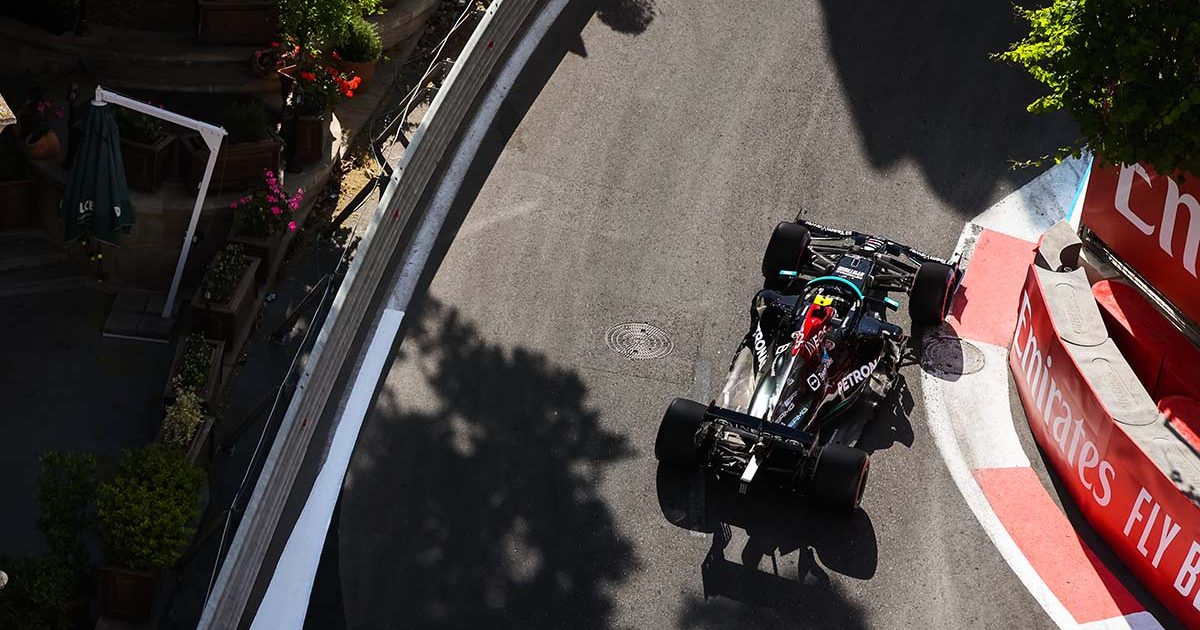 Mercedes lost lap time in every corner of the Baku street circuit on Friday, mainly due to tyre temperature on the W12 cars.

Both Lewis Hamilton and Valtteri Bottas fell outside the top 10 in the Friday afternoon FP2 session, which led to Mercedes boss Toto Wolff initially declining to speak to the media and head straight to the debrief room to figure out why they had such a distinct lack of pace around the Azerbaijan track.

‘No matter how hot it is, the tyres on the Mercedes simply don’t want to come up to temperature fast enough,’ AMuS reported.

‘Hamilton and Bottas missed the magic tyre window by miles in their W12s. With undercooled tyres, lap time is lost in every corner.

‘Mercedes had already expected in advance that there might be tyre problems on the second street circuit after Monte Carlo – but not to this extent.

‘The long lap in Baku should actually make it easier to prepare the tyres, plus the high temperatures.

‘Red Bull and Ferrari are showing the way once again as both reliably get temperature into the tyres regardless of the compound.’

Gonna be a late one tonight, Team. ☕️

Makes all the difference to know we've got your support from around the 🌎 though. 👊 pic.twitter.com/clkNSDjXT4

The report also went on to state that the characteristics of the Baku circuit is also working against Mercedes as the track temperature can wildly fluctuate because of the high number of shaded areas around the track.

AMuS continued: ‘There are too few fast corners to generate energy and thus heat in the tyres. The asphalt may be hot in the sun, but many corners are in the shade. That’s where the track temperature quickly drops by up to 20 degrees.

‘The majority of the corners are negotiated in second or third gear and at speeds of less than 140 km/h. Too slow for the Mercedes.’

“It was our worst Friday by some margin,” Shovlin said.

“Our biggest issue seemed to be the single lap; we’re a long way from our normal positions so clearly we need to find something very significant there.

“The long run picture was not as bad – a fair bit behind Red Bull but still in the mix. So, there was lots to work on overnight; we planned a comprehensive programme of analysis and simulator work to try and understand some of these issues but we clearly have an awful lot to find.”