Home News Mercedes have high hopes for their new Kimi 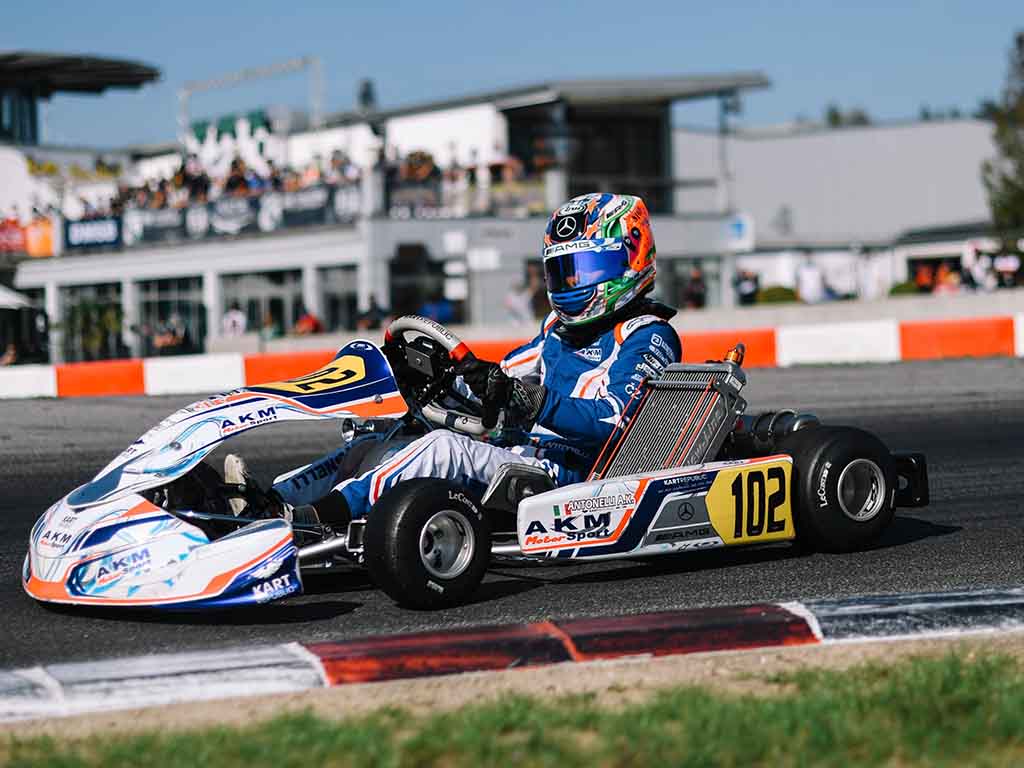 As one Kimi’s F1 career draws to a close, another Kimi is starting to emerge.

Kimi Raikkonen may only have a handful of races left before he retires, another season or two at the very most.

But that famous first name might not be lost to the F1 grid. Shouts of “Go on, Kimi” could be heard again in the future.

That’s because Mercedes have their own Kimi coming up through the ranks.

He’s an Italian teenager named Andrea Kimi Antonelli, listed among their Junior Drivers, and he is making his mark in the world of karting.

So much so that Kimi, as he is nicknamed, has just been crowned FIA European Karting Champion, winning at Wackersdorf in Germany at the weekend to claim the title in the OK class by two points.

Born in Bologna in 2006, the obvious assumption to make is that the youngster’s family were big Ferrari fans.

But Kimi Raikkonen did not actually join the Scuderia until 2007, the year he won the World Championship, so maybe the Antonellis were simply supporters of the flying Finn himself.

It was actually announced after the Italian Grand Prix in September 2006 that Raikkonen was leaving McLaren for Ferrari. Andrea was born on August 25, which suggests the boy may have been named before news of Kimi’s switch to Ferrari was confirmed.

Anyway, Kimi junior’s profile on the Mercedes website says he “caught the racing bug from the tender age of nine” – and he is now following in some very famous footsteps.

Kimi won at Wackersdorf to claim the title in the OK class by two points. 🙏 pic.twitter.com/Z1hEyQt92c

When he joined the Mercedes junior programme in April 2019, it was said Toto Wolff “had been keeping a close eye on his progress for some time”.

“He is racing for Kart Republic, Dino Chiesa’s team, who previously took care of Lewis Hamilton and Nico Rosberg around 20 years ago.

“We were really impressed with him – he’s very mature for his young age, is very patient and extremely clever.

“He’s fast, whatever the conditions are, and I’ve never seen him make a silly mistake.

“The love and passion for motorsport are obvious and he enjoys his racing like I’ve never seen before.

“The way he is racing, overtaking, building his race weekend is very special and we are really looking forward to seeing him move into single-seaters.”

There is no indication yet of whether he will enjoy interviews more than his famous namesake, or if he will be as entertaining over the team radio.

But if Kimi II continues his current trajectory on the motorsport scale, it may not be too many years before we find out.