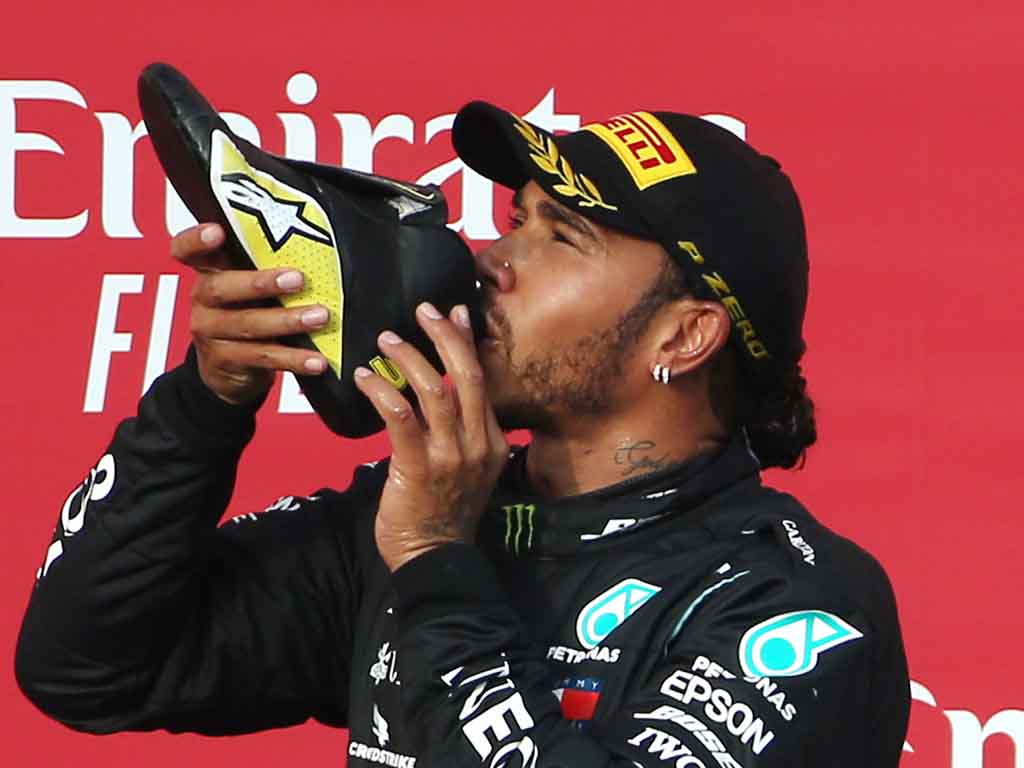 The Briton decided to extend his first stint during the Emilia Romagna Grand Prix after both Bottas and Max Verstappen had made their stops for hard tyres.

In doing so he was able to pull off the overcut and emerged in front of the pair after his stop, with a major helping hand from the Virtual Safety Car, before going on to win the race.

Bottas’ race had been compromised heavily though by damage to the bargeboards on his Mercedes which he picked up after hitting a piece of debris deposited by the Ferrari of Sebastian Vettel.

All of the elements aligned on this momentous day. Mercedes just claimed their 7th Constructors’ Championship! 🏆 To everyone back at the factory grafting away and continuing to push and innovate. You guys are the true unsung heroes. Let’s continue to make history together🙏🏾 pic.twitter.com/LB9HTg8Zq7

Explaining the thinking behind Hamilton’s overcut during Mercedes’ Emilia Romagna GP debrief, Shovlin said: “During that first stint, we were closely watching what was happening with Max Verstappen.

“So, he was clearly in a position where he could threaten Valtteri, but we told Valtteri to push as hard as he could, try and build a bit of a gap. We were looking for abouttwo and a half seconds and that’s enough to protect against the undercut.

“So, we could wait for Max to make the first move and then we would be able to stop the lap later and still be able to hold position. And that’s important because if you haven’t got that gap, you getpushed into a very early stop and you are having to do a very long stint on those tyres.

“So, when Max came into the pits, we had already decided that Valtteri would be in the next lap and that bit was really discussed, it was also discussed on Sunday morning before we even had the race we knew that we would have to react when he stopped if he was behind us.

“Now, the way that we work in our team and I think is the case with most teams, once you have boxed your leader you then look at the second car and in this instance Lewis, who’d inherited the lead, and you try and do what’s best for his strategy.

“But by staying out and going longer, you can get two benefits: one is if there is a VSC or a safety car, you’ll then take the lead, the other benefit is that you are just creating an offset on tyres, but normally the guys that have stopped are quicker, they are on fresh rubber and what would actually happen is they would just move into an undercut so that when the lead car stops he drops behind.

“Now, the very unusual thing here though was Valtteri had picked up that Ferrari front wing endplate, it had got stuck in his bargeboard and was costing him a lot of performance.

“So, Lewis was actually able to go quicker than Valtteri and Max, only a little bit quicker but actually doing faster lap times and that was the reason that he was staying out because he was seeing whether he could build that pit stop gap and be able to drop out in front of them.”

Hamilton stretched his lead over Bottas in the Drivers’ Championship to 85 points after taking victory at Imola, the 93rd win of his career.