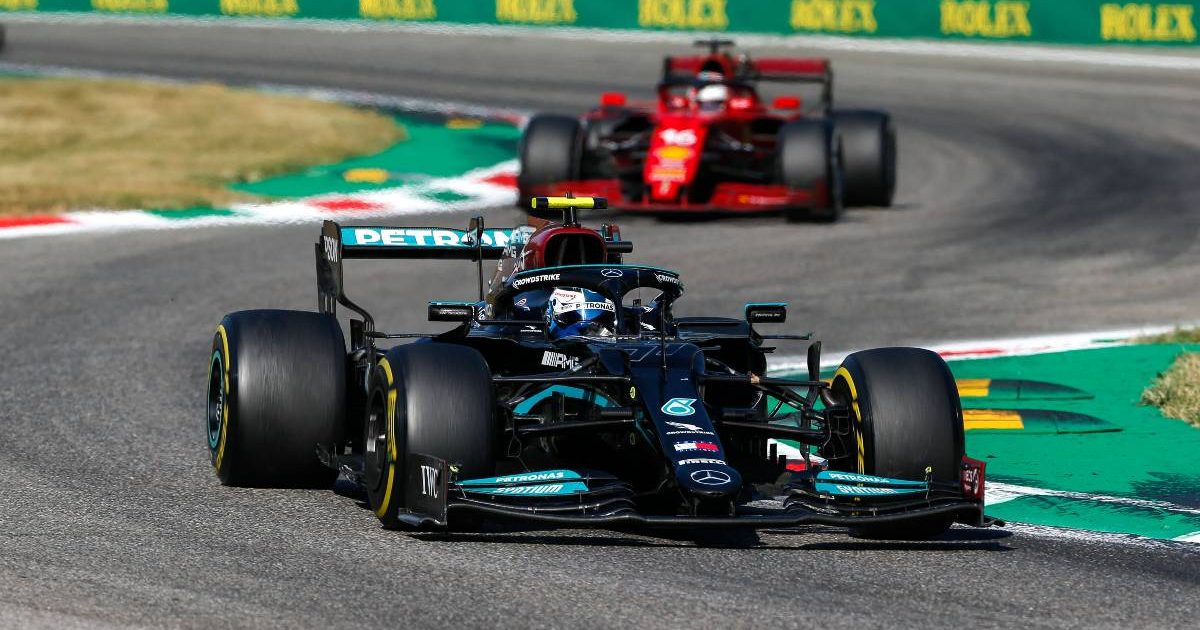 Mercedes have explained why Valtteri Bottas’ rapid progress through the field in the Italian Grand Prix flattened out in the closing stages.

Bottas had been the top performer on Friday and Saturday at Monza, setting the fastest time in the traditional one-hour qualifying session and then leading sprint qualifying throughout.

However, apart from the three World Championship points he earned in sprint qualifying, the Finn’s good work amounted to nothing because he had to start the race from the back of the grid due to a number of his car’s engine parts having to be changed.

The 32-year-old advanced through the field and following the crash that eliminated Max Verstappen and Lewis Hamilton, and the resulting Safety Car period, Bottas ended up on the podium in third position behind Daniel Ricciardo and Lando Norris.

And that was only because Sergio Perez, whom Bottas could not pass and stay ahead of on the road, was penalised five seconds for an illegal overtake on Charles Leclerc and dropped from third to fifth.

However, at one point, it looked like Bottas had the pace to potentially challenge the McLaren duo, even for what would have been a remarkable victory.

Mercedes’ chief strategist, James Vowles, said Bottas’ progress had stalled simply due to coming up against quick cars after he had switched to medium tyres against rivals on the hard compound.

“It’s always more difficult when you are approaching a car of similar performance to your own, especially a Red Bull that’s a fierce adversary, a very, very quick car, especially in a straight line,” said Vowles during the team’s race debrief.

“So, that’s the first difference. Valtteri, when he was at the back of the grid, where he had a good performance differential, it was quite easy to get close to them and overtake compared to something like a Red Bull or a McLaren for example. So that’s the first effect.

“The second is that those hard tyres after the Safety Car restart were struggling, they were a little bit low on temperature and needed a little bit of time to get up into a good working range. Conversely, the mediums are just a little bit better off in those conditions.

“What then happened after six to 10 laps is that the medium was a little bit into overheating territories, a little bit more difficult now to extract everything from it, and the hard tyre became stronger and stronger, relatively speaking.

“So, both of those effects are really what came into play. Valtteri had a valiant attempt on Perez and got past him, but our battery was a little bit low and he got repassed again.

“But that fight was just a fantastic one and really a testament to Valtteri’s race. It’s incredibly difficult at Monza to overtake cars of similar pace. You saw that in the sprint race and again in the main grand prix and yet Valtteri and Lewis both did that and fought their way towards the front.”