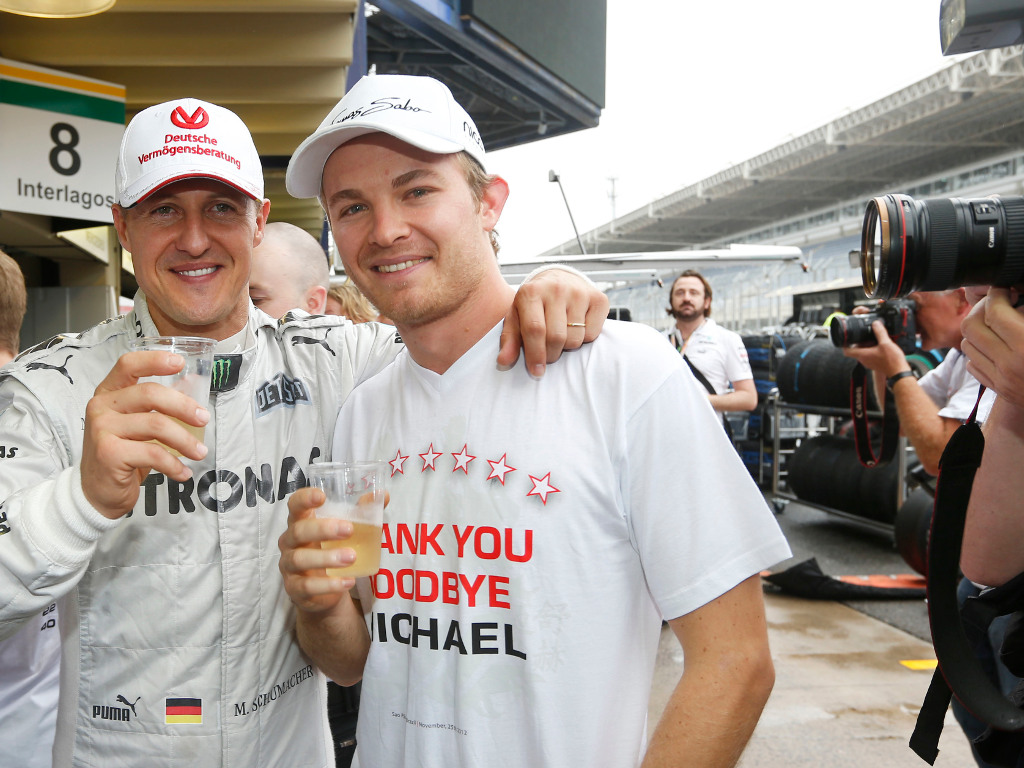 Joining Mercedes in 2010, Nico Rosberg believed he would be top dog only to find out that Michael Schumacher was to be his team-mate.

The German immediately feared he would be second fiddle to Schumacher and that the seven-time World Champion would “manipulate” the team in his favour.

Instead it was Rosberg who not only bagged Mercedes’ first podium but also the team’s first pole position and first victory.

In an interview on the official F1 website, the 2016 World Champion told David Coulthard of his shock at learning that Schumacher would be returning to Formula 1 as his Mercedes team-mate.

“That was not a good moment,” said Rosberg.

“I was all excited that I could be leading this Mercedes team, and the name Schumacher was not even on the horizon. Nobody was even talking about that.

“And then suddenly [team boss] Ross [Brawn] calls me and he says that my team-mate was not going to be Jenson Button or Nick Heidfeld – it’s going to be Michael Schumacher.

“I was like ‘Oh my God!’ The craziest thoughts that I would have no chance, that the whole team would go against me, that Michael would manipulate his way through.

“And also, like, I don’t even know can I keep up with him? He’s the greatest of all time, do I have a chance?

“That was a pretty crazy moment.”

The two were team-mates for three years before Schumacher retired from Formula 1 for the second time at the end of the 2013 season.

During that time Rosberg says he was very much second fiddle to the former Ferrari driver.

“When Michael came along he was like God in the team,” he explained.

“When we had some strategy meetings, even my strategy was only being discussed with Michael and not with me, even though I was sitting there.

“I then addressed that to the strategist that was holding those meetings, we reflected on that together, and it really had a big impact.

“From then on strategy meetings were much better for me, I felt much more comfortable, and I did get that attention from him [Schumacher] just by showing him my ability in the end, and expressing my feelings.”

Not for the first time Rosberg has spoken of Schumacher’s ability to play mind games.

According to the former F1 driver, his compatriot had a natural ability at playing the game.

“Michael is a psychological warrior.

“It was incredible learning for me over those three years, and he doesn’t even have to make an effort.

The German reiterated a story he told earlier this year about Schumacher hogging the bathroom ahead of qualifying for the Monaco Grand Prix, deliberately doing so to thrown Rosberg off his game.

“There are so many examples,” Rosberg added. “The Monaco bathroom was one example, five minutes before qualifying, and only one bathroom in the garage, and he knows I’m standing outside because I’m knocking like crazy, telling whoever is in there to please get out. I’m panicking. I need to pee before qualifying.

“Michael is in there looking at his watch, just chilling because he knows he is going to create more and more stress in my mind, and then with one minute to go he walks out, all chilled out, and he’s like ‘Oh sorry! I didn’t know you were there.’ .

“By this time I was in full panic mode, and it just went on and on.”