Home News Rosberg: Vettel was ‘like a Barrichello’ at Spa 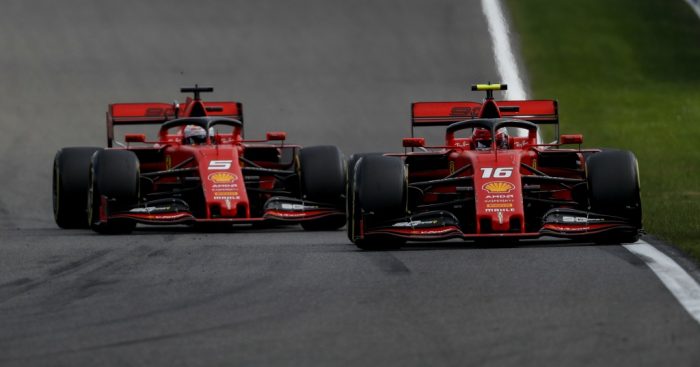 On an emotional afternoon for Leclerc, the 21-year-old held off the late advances of Lewis Hamilton to claim victory in Spa – the first win of his Formula 1 career.

Vettel meanwhile was forced to settle for helping his younger team-mate by letting him through into the lead before trying to hold up Hamilton.

Ferrari are no strangers to having a clear number one and two driver, for years it was Vettel with number one status while partnering Kimi Raikkonen, but Rosberg claimed the nature of what happened in Belgium reminded him of the Michael Schumacher/Barrichello days at the Scuderia, where the Brazilian became somewhat of an on-track servant to the seven-time World Champion.

” [Charles] Leclerc is driving so well this year, I think this is going to be a really important breakthrough for him mentally and getting that first win just gives you so much confidence as a driver,” Rosberg said in his post-race debrief.

“So, he’s going to get another step and he is just on it, he just feels so good with that car.

“And poor [Sebastian] Vettel, he was like a [Rubens] Barrichello in that race, just waving past your team-mate and helping him out.

“It’s amazing for a four-time World Champion, that’s impressive so let’s see how that plays out for Vettel, he won’t be very happy with that that’s for sure.

“Vettel is just struggling with the Ferrari car at the moment, especially with the rear end because it’s very nervous, he just needs the confidence on the rear end and he’s not getting it from the car.”

Next up for Formula 1 is Ferrari’s home race in Monza, and Rosberg like many expects them to be strong again on home soil.

“Next weekend is Monza, another high-speed track and that is where the Ferrari car is best so Leclerc is the definite favourite again for Monza which would be epic,” said Rosberg.

“With the Tifosi in Monza that’s going to be a huge party if the Ferrari is fast and they will definitely be the big favourite for that track now, so that’s good for F1 that we get a bit of a change there.”

Rosberg won his only Drivers’ Championship with Mercedes in 2016, and he feels his former employers are struggling in the engine-development race with Ferrari.

“Ferrari have not only aerodynamically the fastest car on the high-speed tracks, but they also have the fastest engine at the moment with about 20 horsepower more than Mercedes,” he explained.

“It’s incredible how they have out-developed Mercedes in engine power.

“Mercedes is a bit stuck there, they have had some issue in the engine development – every time they make a step they start getting problems that are unexpected and take a step back, so Ferrari is out-developing them with the engine.”