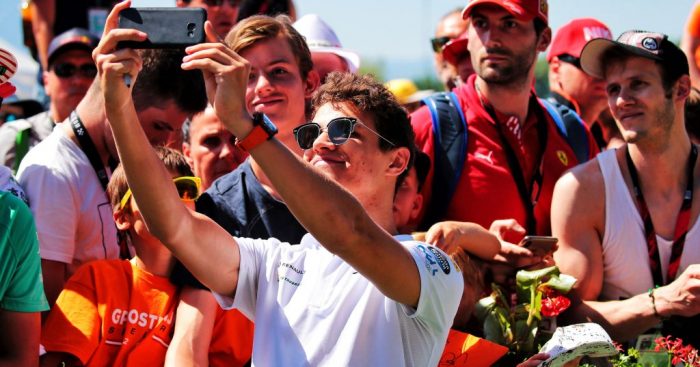 McLaren’s Lando Norris, who proved a pest for many of the front-runners, is rightfully delighted with his P6 finish at the Austrian Grand Prix.

Norris started the race P5, but after Max Verstappen suffered a poor getaway he jumped the Dutchman and even passed Lewis Hamilton to briefly hold P3.

The Brit would ultimately drop back behind Hamilton, Kimi Raikkonen, Sebastian Vettel and Verstappen, but made a move on Raikkonen to finish P6 and match his best finish in Formula 1.

“It was a fun race!” Norris told reporters at the Red Bull Ring.

“A good start, managed to go forwards and battled the Mercedes and the Ferrari for a lap or so, but had to concede those positions and think of my own race.

“The Alfa got past me on the first lap, around the outside at turn 4, not much I could’ve done and dropped back to fourth and then fifth, then had Max behind me for a little bit.

“I saved my tyres for the first few laps, had it under control then pushed and did what I needed to do.

“I was just doing what I had to do in terms of saving the tyres and not taking any risks.

“There was a lot more in it if I really needed to push.”

🏁 Chequered flag at the #AustrianGP! An all-round team effort to pick up double points in Spielberg. 🤜🤛

Norris’ team-mate Carlos Sainz started P19 but recovered to P8, making it a double-points finish for McLaren in the process.

The Spaniard was pleased that he managed to turn the frustration of his penalty that dropped him down the order into positive momentum for his fightback.

“What a race!” beamed Sainz. “I’m really, really happy with how we recovered from a tough weekend, and from P19 on the starting grid.

“I had this feeling of frustration due to the penalty, but this morning I turned all that frustration into motivation for the race.”

Sainz started on the medium compound, running it until lap 41 in a strategy which paid off.

However, damage to his front wing which he suffered while battling Pierre Gasly, brought his climb up the order to a premature end.

“I think we executed a very strong race today,” he said.

“A long stint on the medium tyre and then pitting for the hard compound in the right moment. From that point onwards it was overtake after overtake, and I made my way into the points.

“The only setback of the day was that my front wing got damaged 10 laps from the end when I was starting to attack Gasly.

“With the pace I had, I think I could’ve taken P7.

“But I really had to drive the car carefully to avoid any mistakes and finally managed to stay ahead of Raikkonen.

“Very happy for everyone in the team. Great race, great comeback and congrats for another double points finish.”