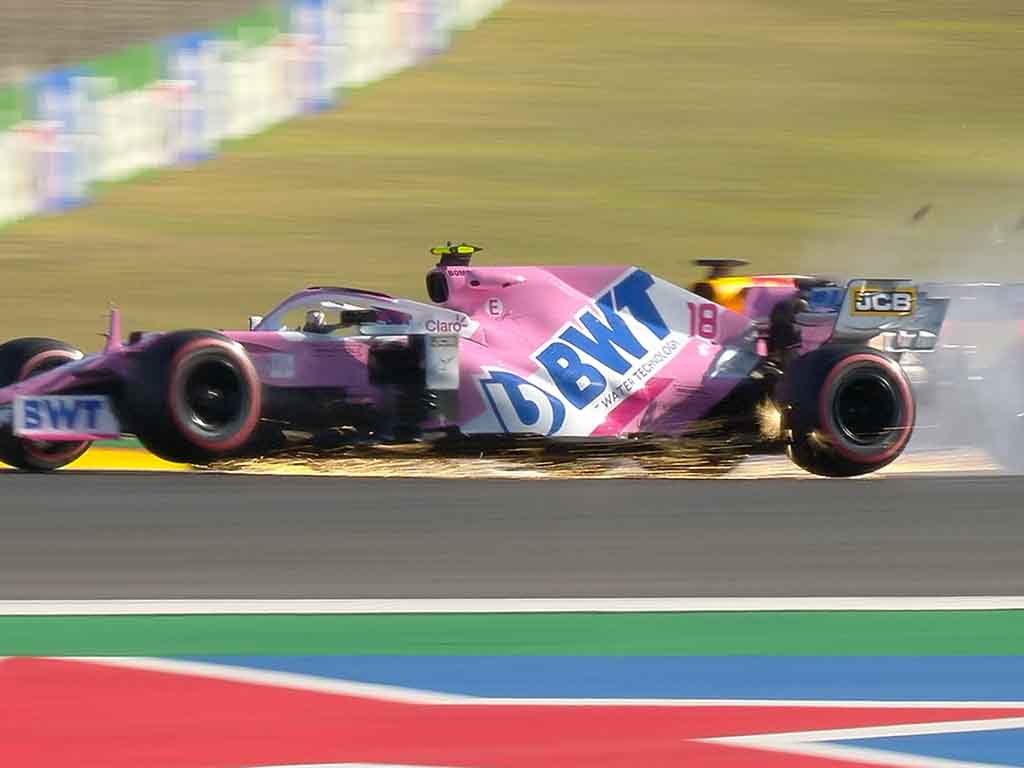 A car fire, a collision between Max Verstappen and Lance Stroll…oh and Valtteri Bottas topped yet another Friday practice session.

Bottas finished top of the timesheet with a 1:17.940 but all the drama was further down the Formula 1 pecking order as FP2 was red-flagged twice in quick succession.

Pierre Gasly was forced to make a quick escape from his burning AlphaTauri car, while Verstappen and Stroll thought it was race day as they wrestled each other into Turn 1 before colliding with each other.

Bottas kept hold of a half a second gap to Verstappen in P2, with Charles Leclerc, Carlos Sainz and Sebastian Vettel rounding off the top five.

Lewis Hamilton was 1.3 seconds off the pace in P8 but his hot laps before the red flag incidents were all aborted, mainly due to tyre warm-up issues.

There were a few more threatening rain clouds hovering above between the end of FP1 and the start of FP2, but it was predominantly blue skies and sunshine as the track lights went green again.

There was a slight change to the schedule for second practice as the first 30 minutes was dedicated to testing a new Pirelli prototype tyre.

Each team had three sets to use. Two for one driver and one for the other driver, with the latter focusing on a longer run.

Whilst that was something a bit different, one thing staying the same was the driver struggling for grip on this undulating circuit. Carlos Sainz and Sergio Perez were amongst the early spinners.

Even though the times during the first half hour of running will not be representative of what is to come in Sunday’s race the top 10 was as follows:

With the prototype tyre testing done and dusted, it was back to our regular schedule with some qualifying simulation runs…well so we thought.

Verstappen whittled the best time down to a 1:19.033 on his first hot lap, shaving a tenth off Vettel’s previous best.

As Hamilton prepared with a couple of warm-up laps, Leclerc lowered the benchmark further with a 1:18.838. Bottas, meanwhile, had a traffic-free lap and pumped in a 1:17.940 on the soft tyres.

The session would be red-flagged moments later on as Pierre Gasly’s AT01 caught fire. He was able to make a quick escape as the marshals raced across the track with fire extinguishers.

That car running a bit too hot.. pic.twitter.com/MwWNE0zPNN

The fire and resulting recovery operation ate up 15 minutes on the session clock, leaving just 27 minutes left for the teams to try and play catch up.

However, there was yet another red flag minutes later as Lance Stroll and Max Verstappen collided going into Turn 1, both on hot laps.

No sooner had we started and we've stopped again! 😮

Verstappen and Stroll tangle at Turn 1, Stroll spins into the gravel and we have another 🚩 Red Flag 🚩#PortugueseGP 🇵🇹 #F1 pic.twitter.com/hFI0gKBcfO

The collision ensured that Stroll’s car became beached in the sand trap and caused another lengthy stoppage.

“What the **** is wrong with him?” Verstappen bemoaned as he made his way back to the pits.

The stewards have launched an investigation into the incident.

There were just seven minutes left on the session clock, meaning FP2 passed without any meaningful long-run data ahead of Sunday’s race.