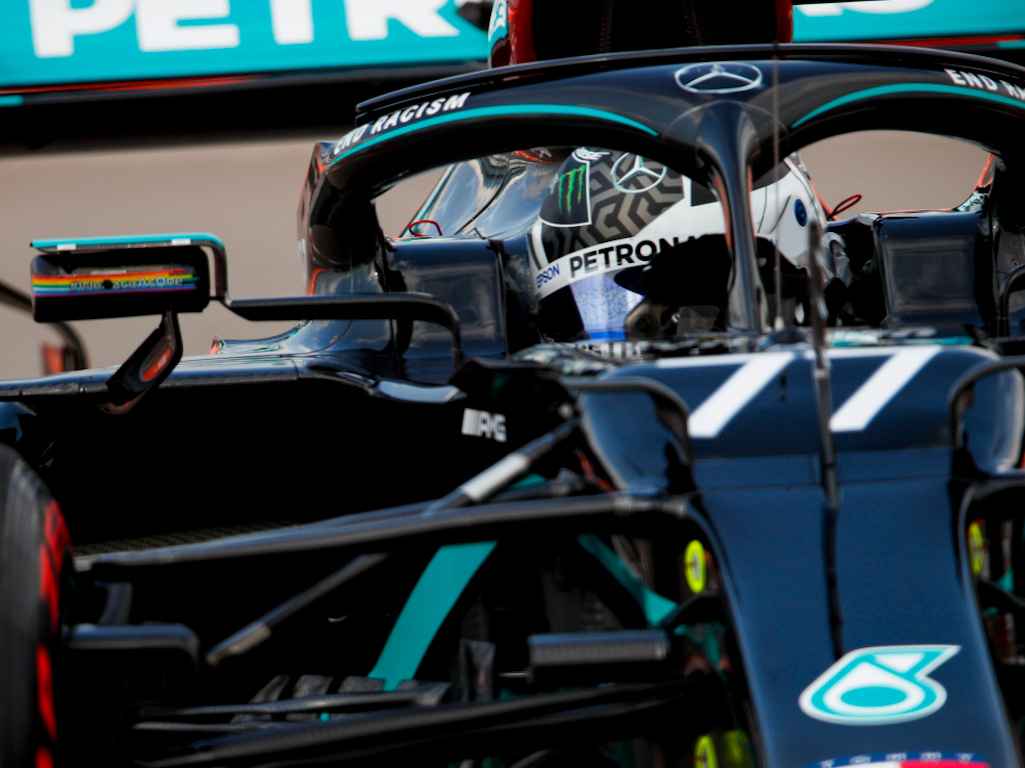 Valtteri Bottas came from behind to snatch pole position away from Max Verstappen, extending Mercedes run to 11 successive P1s for this season.

Lewis Hamilton also edged ahead of the Red Bull driver, taking second by 0.04s. Charles Leclerc will start from fourth on the grid.

Qualifying got underway with an unexpected driver taking to the track in the Racing Point with Nico Hulkenberg a late call-up to replace the unwell Lance Stroll. The German was one of the first out, in desperate need of as many laps as possible given that he did not take part in the weekend’s only practice session.

Once again Peak 2020 is happening as Nico Hulkenberg gets his first laps of the weekend in qualifying standing in for Lance Stroll! HASHTAG HULKENBACK #EifelGP pic.twitter.com/0B112rigLG

His first lap, a 1:32.190, was some six seconds slower than Lewis Hamilton’s P1 time but at least it counted. The same cannot be said of Romain Grosjean and Kevin Magnussen’s times as both exceeded track limits and had those deleted. Their second laps left the Haas duo languishing in the cut-off zone, 16th and 17th respectively

Hulkenberg upped his pace, getting within 3.5s of Max Verstappen’s pace-setting time but stayed down in 20th, while Magnussen jumped up into the top ten. Grosjean also improved only to yet again lose his time for the Turn 4 limits.

Hamilton and Valtteri Bottas were the first two out onto the track in Q2, both heading out on the medium tyres as did the Ferraris of Sebastian Vettel and Charles Leclerc. The Red Bulls headed out on the soft tyres.

Verstappen hit the front with a 1:25.7 with Hamilton second, half a second down, and Alex Albon third. Leclerc went ninth with Vettel in the drop zone in 11th.

The two Mercedes drivers ventured out for a second run on the soft tyres as too did the Ferraris. Hamilton hit the front with a 1:25.3, 0.08s faster than Verstappen, with Bottas up to third.

Ferrari’s swap to soft tyres didn’t work as well for Vettel. The German upped his pace to go P10 only for Leclerc to improve to fifth and push his team-mate out of Q2. It is the seventh qualifying in succession in which Vettel has missed out on a Q3 berth.

The battle for pole position looked set to be fought between Verstappen and the two Mercedes drivers. It was the Red Bull who grabbed the early advantage with a 1:25.7.

Mercedes, though, wasn’t far behind. Bottas’ best was 0.068s slower than Verstappen while Hamilton was a further 0.013.

Albon slotted into fourth ahead of Leclerc and Esteban Ocon.

Verstappen and Bottas were both up through the first sectors on their second runs with the Finn purple in the first sector. Hamilton fought back in the second, going purple, before Bottas pipped his time. Hamilton upped his pace only to be beaten by Bottas with Verstappen the next to cross the line.

The Dutchman lost time in the final sector and had to settle for third behind Bottas and Hamilton.

Pole position for Valtteri Bottas! He was quicker than Lewis Hamilton by 0.256s 😳

Third pole position of the season for the Finn.#EifelGP 🇩🇪 #F1 pic.twitter.com/8mOYNVYfnB

Leclerc will line up fourth ahead of Albon and Ricciardo with Ocon, Lando Norris, Perez and Carlos Sainz completing the top ten.