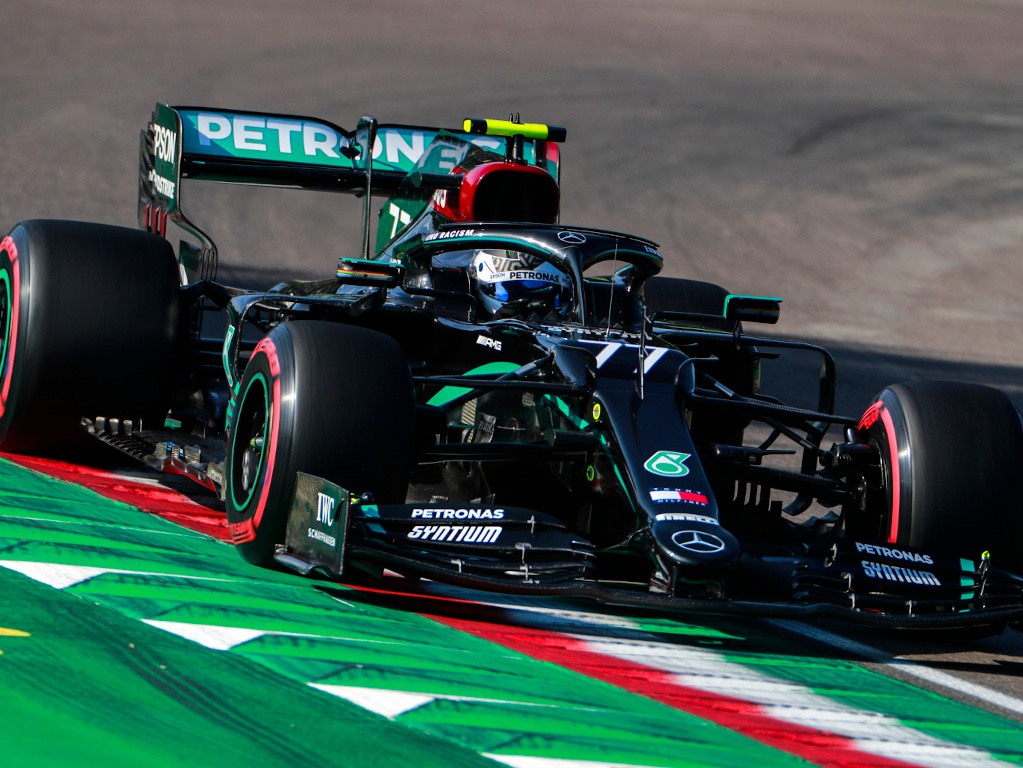 The Formula 1 drivers took to the circuit for Q1 acknowledging the importance of a good grid slot. The Imola circuit may be beautiful and old school but it isn’t known for easily passing and with a solitary DRS zone, overtaking will be difficult on Sunday.

After track limits resulted in almost all the drivers losing a lap time or two in practice, the FIA altered the rules ahead of qualifying. For the rest of the weekend the drivers have more leeway at Turns 9 and 15, giving them a tad more room to run wide, while Turn 13 has been added to the list of corners being monitored.

The drivers still struggled to get it right with Bottas and Alex Albon in the dropzone and in the pits with six minutes to go as both had lap times deleted for exceeding limits at Piratella. Their team-mates, Lewis Hamilton and Max Verstappen, were up in P1 and P2.

But the Finn's lap time has been deleted… 😬 pic.twitter.com/kWu1djMKWC

Bottas made it through in first place after Hamilton had his best time deleted with the Finn 0.008s, Albon was in eighth, while out went Romain Grosjean, Kevin Magnussen, who had a trip across the gravel, Kimi Raikkonen, who made his thoughts known when his time was deleted for track limits, Nicholas Latifi and Antonio Giovinazzi.

The two Mercedes drivers and Charles Leclerc all went out on the medium tyres in Q2, the session that determines what tyre compound the top-ten use at the start of the race. Sebastian Vettel and the Red Bulls followed suit.

Verstappen reported “no power, I don’t know what is going on” and was told to “keep pushing”. His response was colourful as he returned to the pits without a time on the board. The rear of his RB16 was quickly swamped with mechanics as the engine cover was removed.

Meanwhile Bottas went quickest by 0.058s ahead of Hamilton. Albon compounded Red Bull’s trials with a spin coming out of Variante Alta, leaving him down in 11th place. Vettel was also in the danger zone, the Ferrari man P14 after dipping a wheel into the gravel at the final corner, slowest of all the drivers who had set times.

Red Bull team boss Christian Horner reported a suspected “spark plug issue” is what sent Verstappen back into the pits. Red Bull changed that and fired up his engine with three minutes to go. He left the pits on medium tyres and went fifth fastest. Albon went out on the softs and put his RB16 up into fourth.

Ferrari also swapped to the softs with Leclerc safely in the top ten, and Vettel once again failing to make his way out of Q2. He finished P14. Out went Sergio Perez, Esteban Ocon, George Russell, Vettel and Lance Stroll, who had his fastest time deleted for track limits.

Q3 began with a bit of spice as former team-mates Verstappen and Daniel Ricciardo had a moment in the pits with the Renault released into the Red Bull’s path. Verstappen wasn’t happy.

We know Verstappen and Ricciardo are close…

But this was a bit 𝘵𝘰𝘰 close in the pit lane 😳#ImolaGP 🇮🇹 #F1 pic.twitter.com/sAE3Q6VYNG

Back on the track it same result different Saturday as Hamilton put his W11 onto provisional pole with a 1:13.781, Bottas going +0.031s, Verstappen up to third ahead of Pierre Gasly. Albon had his first lap time deleted – seventh time on Saturday – with Charles Leclerc up to fifth ahead of Lando Norris.

Daniil Kvyat was the first one out for his second run followed by Carlos Sainz with Ricciardo and Albon next out. Then came the Mercedes drivers, Gasly, Leclerc, Norris and finally Verstappen.

In the battle for pole position, Bottas went purple in the first sector and was faster through the second too. Hamilton did a 1:13.706, slightly faster than his previous best, but Bottas responded with a 1:13.609, 0.097s up on his team-mate.

The Finn took pole position, the 15th of his F1 career with Mercedes locking out the front row ahead of, you guessed it, Verstappen.

Gasly was fourth ahead of Ricciardo and Albon with Leclerc, Kvyat, Norris and Sainz completing the top ten.