Home News Qualy: No party, no problem for record-breaking Mercedes 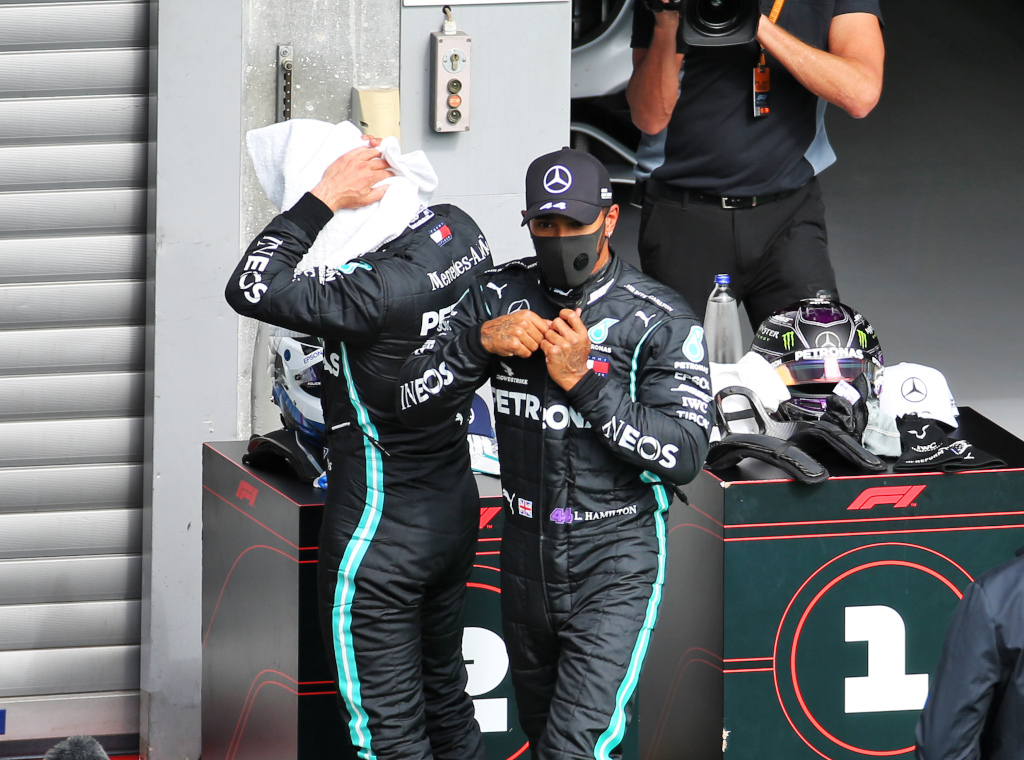 Mercedes thrice broke the record for the fastest lap time in Formula 1 history as Lewis Hamilton beat Valtteri Bottas to pole position at the Italian GP.

It was an afternoon to forget for Sebastian Vettel, who had a “s***” qualifying and finished down in 17th place.

With the visits to the stewards office out of way for almost half the field, eight drivers were called up after the traffic chaos late in FP3, the drivers were back in their cars for qualifying for the Italian Grand Prix with more trouble expected.

The tow around the Monza circuit is worth about half a second making it one of the more important venues on the calendar to be second, or third, or pretty much anywhere but first in the queue.

In a catch 22 situation, drivers want a car ahead of them but not one that they deem is slower than their’s. They want the tow but not dirty air so also want to leave a small gap to the car ahead. But if they leave a gap then the car behind tries to pass to fill it, and they don’t want that.

Q1 began with Ferrari, Alfa Romeo, Haas and Williams the first into the action having left the pits in pairs hoping to grab a slipstream. Charles Leclerc went quickest in the early running with a tow from Sebastian Vettel only to have it deleted for exceeding track limits at Parabolica. Kevin Magnussen’s first time was also deleted with Pierre Gasly and Lance Stroll also losing times.

Several lap times have been deleted for passing the white line on the final corner, including Charles Leclerc, Lance Stroll and Pierre Gasly#ItalianGP 🇮🇹 #F1 pic.twitter.com/I2hKGmTWat

Mercedes came out to play on the medium tyres with Lewis Hamilton ahead of Valtteri Bottas, both below the 1:20 mark. Sergio Perez put his pink Mercedes up into third place but was half a second down.

Alex Albon also lost a time, leaving him down in 15th place and on the cusp. He told Red Bull he wouldn’t be able to improve his time unless he was in a “group” and had a tow. Vettel had fallen to P17 with four minutes to go.

17 of the 20 drivers went out for a second run resulting in the expected traffic jam at Parabolica as they slowed down to get a bit of space while also trying to avoid having a slower car ahead. Confusion.

Vettel almost rear-ended a Williams while Kimi Raikkonen tangled with Esteban Ocon who didn’t want the Alfa Romeo driver to pass. The latter incident will be investigated after qualifying.

As it played out the five drivers not to make it out of Q1 were Romain Grosjean, Vettel, who didn’t complete his lap, Antonio Giovinazzi, George Russell and Nicholas Latifi.

Vettel: "What a mess. Why the Alfas have to overtake everybody and cause sh*t? I guess that's it."

Seb is out in Q1 at the #ItalianGP 🇮🇹 #F1pic.twitter.com/hh5S84H8hH

Unlike in Q1, Q2 had Mercedes joining the rest of the field, or at least the 15 drivers remaining in qualifying, on the soft tyres. A 1:19.092 for Hamilton, which was a new fastest lap record for F1 based on average speed. Bottas lined up second with Perez again third.

A snap of oversteer for Daniel Ricciardo meant he a) could not improve his time and b) could not give Ocon a tow. Behind them Bottas upped his pace to a 1:18.952, breaking the record Hamilton set minutes earlier, with the Brit second and Sainz overtaking Perez for third.

Out went Daniil Kvyat, Ocon, Leclerc, Raikkonen and Kevin Magnussen. For the first time since 1984 neither Ferrari made it into the top ten at the Italian GP. “Best I can do,” said Leclerc.

Neither Ferrari will start from inside the top ten at Monza, for the first time since 1984#ItalianGP 🇮🇹 #F1 https://t.co/RsCuxku3MX

Having dominated the first two segments the only question in Q3 was which Mercedes driver would take pole position. Trading purples on their first hot laps Hamilton did a 1:19.0 with Bottas 0.06s down on his team-mate. Perez was third on the provisional grid ahead of Verstappen, Sainz and Norris. Albon was down in P10 as his time was deleted for, again, exceeding the track limits at Parabolica.

And then they all pitted, and there they all stayed waiting to see who would jump first and take the risk of being the one man without a tow.

It was Mercedes, who actually went out earlier than usual, catching their rivals by surprise. Bottas led the queue ahead of Hamilton with the two Red Bulls quickly into formation behind the six-time World Champion.

Bottas crossed the line with a 1:18.956 with Hamilton doing a 1:18.887, another new fastest ever lap record. It was the Brit’s seven pole at Monza and his 10th front row start for the Italian GP.

Hamilton on pole with fastest lap in #F1 history.

Sainz jumped up to third place ahead of Perez and Verstappen with Norris, Ricciardo and Stroll next in line. Albon and Gasly completed the top ten.