Home News Qualy: Hamilton puts it on pole in Portimao 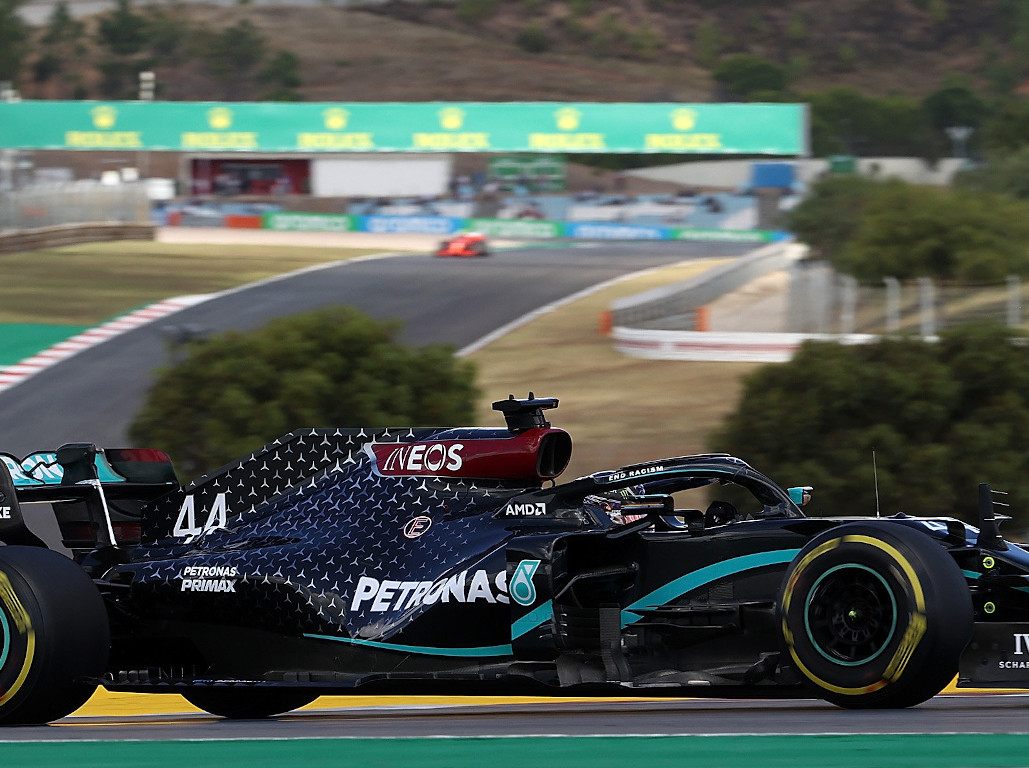 Lewis Hamilton held off Valtteri Bottas in qualifying at the Algarve circuit to give himself the best possible starting position as he chases win number 92.

Portimao’s inaugural Formula 1 qualifying did not get off to a good start with Q1 delayed by 30 minutes as track officials and marshals continued to search for loose drain covers following Sebastian Vettel’s FP3 incident.

Given the all-clear, Q1 began at 2:30pm local time. Practice pace-setter Valtteri Bottas immediately jumped into the P1 slot with a 1:17.064 with his team-mate Lewis Hamilton, on his second hot lap after his first was compromised by track, up to P2, 0.050s down.

Hamilton responded with a 1:16.8 while Max Verstappen, who had run wide at Turn 1 on the previous lap, jumped up to second, 0.051s slower. Bottas was third.

Behind them the bottom six drivers, of which five would drop out at the end of the session, were separated by less than three-tenths with Antonio Giovinazzi holding down the all-important P15.

The Alfa Romeo didn’t make it, dropping out along with his team-mate Kimi Raikkonen, Romain Grosjean, Kevin Magnussen and Nicholas Latifi.

Q2, the session that determines the tyres that the drivers use at the start of the grand prix, saw a handful of drivers leave the pits on the medium tyres including Hamilton, Bottas, Sebastian Vettel and Charles Leclerc. Red Bull went out on the soft Pirellis.

Bottas laid down with a 1:16.466 with his team-mate 0.358s back with Verstappen a further two-tenths off the pace. Daniel Ricciardo was holding down P10 by a tenth ahead of his team-mate Esteban Ocon in the battle to make it into the pole position shoot-out.

With Leclerc P8 and Vettel down in 14th, Ferrari sent its drivers out on the soft tyres for their second run. Unfortunately for Vettel it made no difference, in fact he lost a position to George Russell. Vettel informed Ferrari that he couldn’t get heat into his tyres.

As Ricciardo went spinning off the track at Turn 11 and nudged the barrier with his rear wing, out went his team-mate Ocon along with Lance Stroll, Daniil Kvyat, Russell and Vettel.

Whoa! Danny Ric goes for a spin at the end of Q2

He bips the rear wing on the barrier, but he gets out of the gravel, and he's made it into Q3 😅#PortugueseGP 🇵🇹 #F1 pic.twitter.com/XQ5e3tsKKI

Bottas put his W11 up onto provisional pole at the start of Q3, a 1:16.986 for the Finn, with Hamilton 0.047s slower. Once again it was Verstappen who lined up third with Leclerc in fourth place.

However with one more run to come, it was all to play for… at least at Mercedes.

While his rivals were out on track, Ricciardo was stuck in the pits as Renault replaced his rear wing which had been damaged in his Q2 off. Pierre Gasly also didn’t take part in the first run.

Both Mercedes drivers opted to do their second runs in Q3 on the medium tyres, everyone else sticking to the red soft Pirellis.

Hamilton, though, was fuelled and had time for a second hot lap! It was a 1:16.692 as Hamilton snatched pole position from his team-mate again and gave himself the best possible starting position as he chases win number 92.

Verstappen was third, as per usual, ahead of Leclerc, Perez and Albon.

The McLarens of Carlos Sainz and Lando Norris were next in line ahead of Gasly and Ricciardo, who didn’t make it out onto the track to set a time.