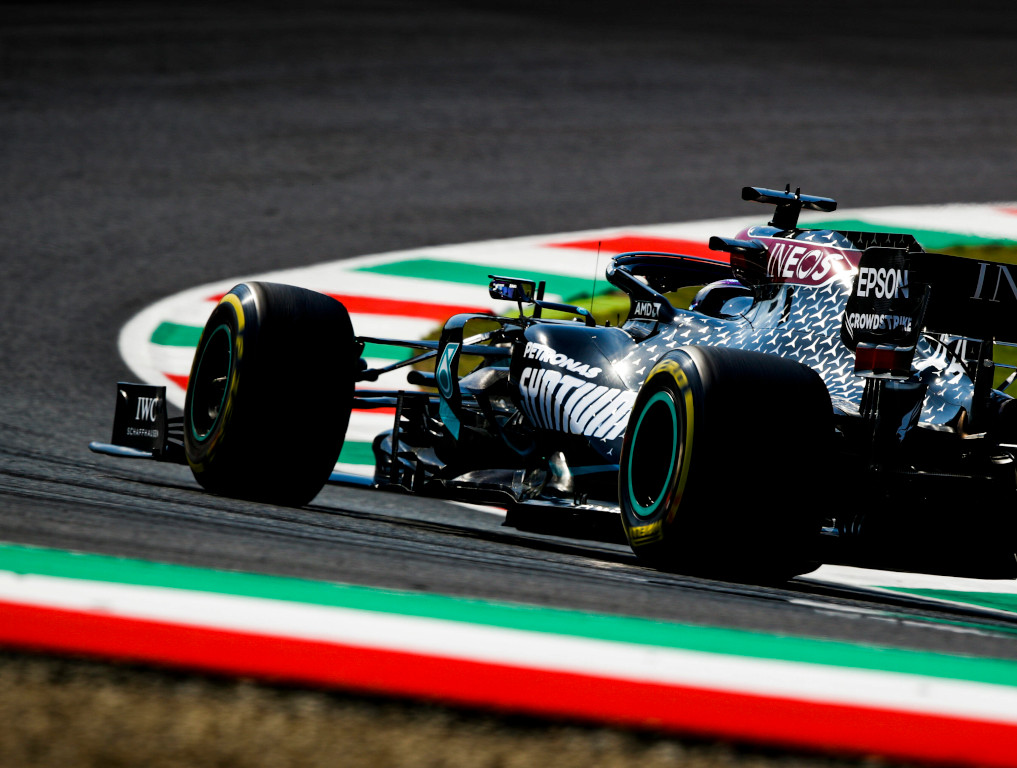 Lewis Hamilton produced the lap when it mattered, taking pole position for the Tuscan GP ahead of Valtteri Bottas while Sebastian Vettel once again dropped out Q2.

For the first time ever a Formula 1 qualifying session took place at the high-speed Mugello circuit with the battle on to see who would go down in history as the first pole sitter at the Tuscan Grand Prix.

Bottas went into qualifying as the one to beat, the Finn having topped all three practice sessions.

He continued that run into Q1, quickest ahead of Hamilton, however, that’s where it ended.

In keeping with past form, Hamilton came to the fore when it mattered most, setting the pace in Q2, before beating his team-mate to pole position.

Slow out-laps was the order of the day as the drivers tried to keep all the life in their tyres for their hot laps.

Hamilton crossed the line with a 1:15.144 to sit on provisional pole by 0.059s ahead of his team-mate, the Brit finding a few tenths in the middle sector.

A yellow flag in the opening sector, the result of Esteban Ocon spinning, meant Bottas was forced to lift on his second run and was not able to challenge his team-mate for pole.

It was Hamilton’s 95th pole.

Bottas had to settle for second place ahead of Max Verstappen and Alex Albon while Charles Leclerc surprised as his put his Ferrari up into fifth place.

Sergio Perez qualified P6, but has a one place grid penalty, while his team-mate Lance Stroll was seventh ahead of Daniel Ricciardo, Carlos Sainz and Ocon.

Sebastian Vettel didn’t make it out of Q2 and only just managed to sneak out of the first segment by 0.053s.

Such was the German’s lack of speed, coupled with his SF1000’s oversteer, that he asked Ferrari if he was “through or not”. He was, at least into Q2.

The excitement is unreal pic.twitter.com/Vt2VwDpA0k

That, however, is whether his qualifying ended, the German finishing the afternoon in 14th place.

He dropped out along with Lando Norris, his first Q2 exit of the season, Daniil Kvyat, Kimi Raikkonen and Romain Grosjean.

But while Vettel’s early exit was expected, the same cannot be said of Italian GP winner Pierre Gasly, who dropped out in Q1.

He was the man that Vettel pushed out of the top 15, “putain”, not helped by a mistake on his final flying lap.

He will line up 16th ahead of Antonio Giovinazzi, George Russell, Nicholas Latifi and Kevin Magnussen.

Russell had a huge moment at Savelli, off the track and into the dirt, and yet still managed to improve his time to maintain his perfect record in qualifying against his team-mates.

I believe the technical term for this from George Russell is "the full send" #TuscanGP pic.twitter.com/XYGkHpenPV