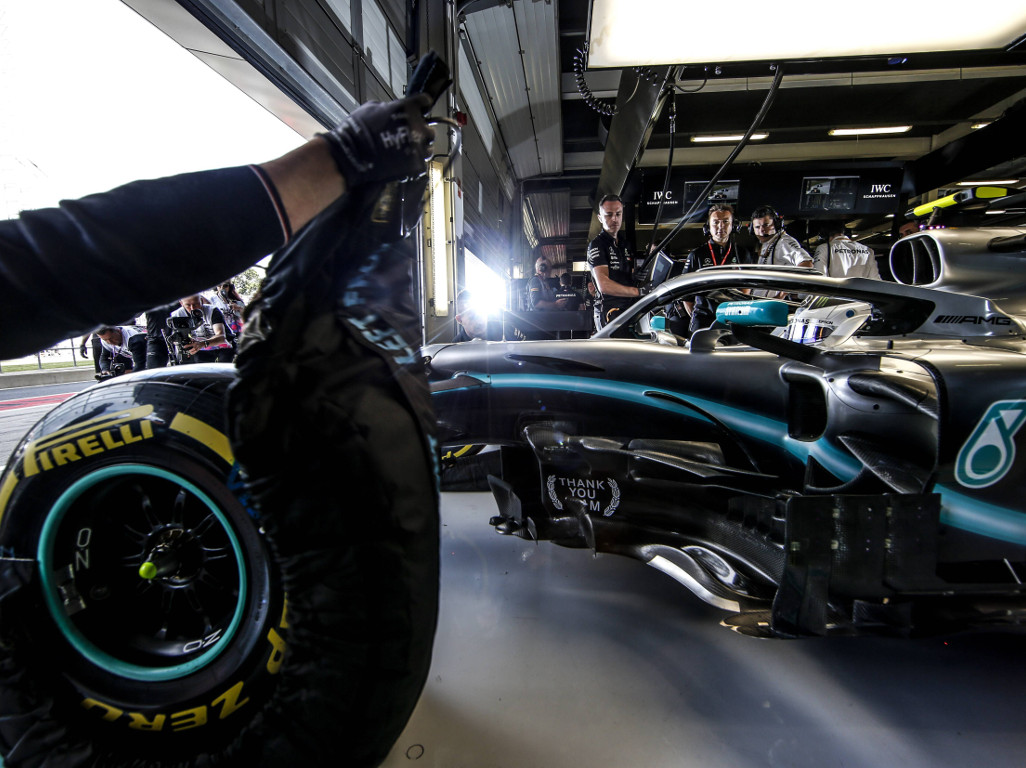 Valtteri Bottas snatched pole position for the British Grand Prix from Lewis Hamilton by 0.006s in what was Mercedes’ 64th front row lock-out in F1.

It was an intense finish to qualifying at the Silverstone circuit with Charles Leclerc on a flier in the Ferrari. He, however, finished 0.079s down.

Qualifying got underway with the threat of rain in the air and the track temperature sitting at 28’C.

Mercedes were the last to set a time but that didn’t stop Lewis Hamilton from going 0.02s fastest than Charles Leclerc, who was running the medium tyres to Hamilton’s softs.

New. Track. Record!! 👊 Lewis fires in a 1:25.513 – that’s the fastest anyone has ever gone around this Silverstone circuit! #BritishGP pic.twitter.com/oPXCdePfij

It was a short afternoon out on track for the five drivers who failed to make it out of Q1: Kevin Magnussen, Daniil Kvyat, Lance Stroll, George Russell and Robert Kubica.

There was a rush to get out in Q2 and put in a banker lap as the skies overhead darkened.

Leclerc was quickest on the medium tyres with a 1:25.6, 0.026s up on Valtteri Bottas, who was also on the mediums as were Hamilton, Max Verstappen and Pierre Gasly.

Sebastian Vettel, running old soft tyres, was P8 before a second run on new softs put him P5 and into Q3.

But the big surprise of the session was that Leclerc, P1 at the time, used the soft tyres to go even faster – 1:25.546 – meaning he will start the race on the red Pirellis.

The soft Pirellis were the tyre of choice in Q3 for the 10 drivers in the pole position shoot-out, which included Lando Norris and Alexander Albon.

Neither rookie took part in the first run as both had just one set of new soft tyres available for the session.

The Mercedes drivers traded purple sector times as Bottas set the early pace with a 1:25.0 with Hamilton, who got it wrong at Brooklands, a quarter of a second down.

Quite a lot of poo has just shot out pic.twitter.com/hI1VjWqogO

Verstappen was third ahead of Leclerc, Gasly and Vettel.

With the front runners all back in the pits, Norris and Albon ventured out with the McLaren driver going P8 to Albon’s P9.

Bottas was not able to improve his lap time while Hamilton went purple in the final sector to challenge his team-mate. He fell short by 0.006s.

The duo had to wait as Leclerc was the next to cross the line. The Ferrari driver was purple in the first sector and green in the second and third but fell short by 0.079s.

Verstappen qualified P4 ahead of Gasly, Vettel and Daniel Ricciardo.