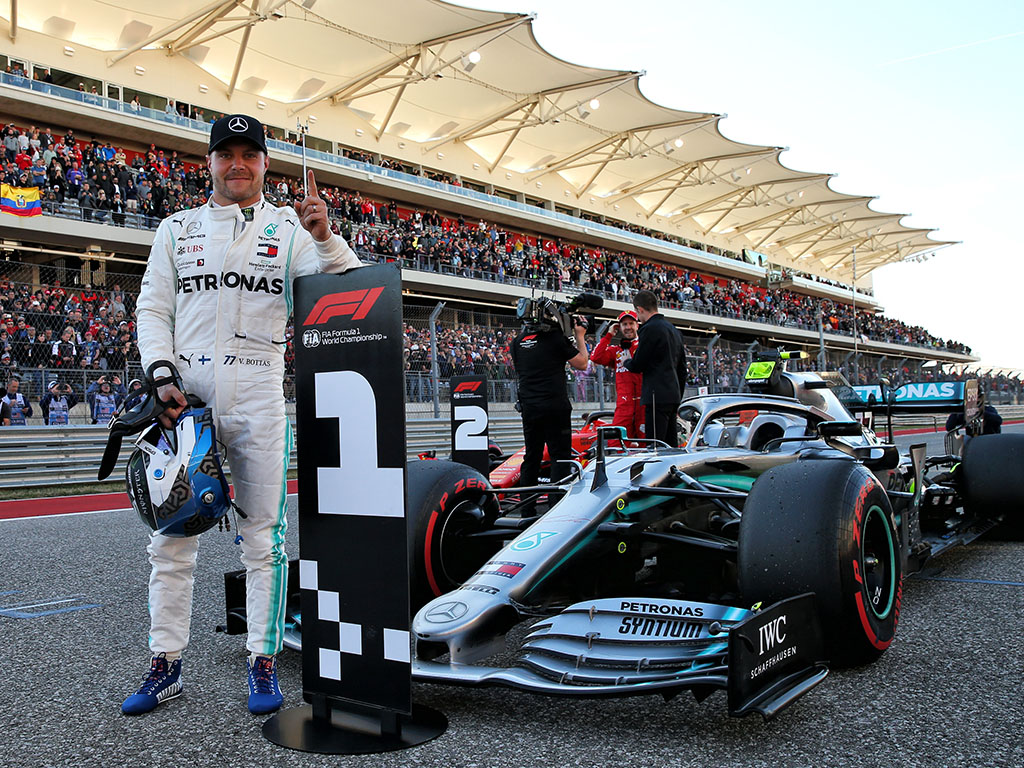 Valtteri Bottas clinched his first pole position since Silverstone after pipping Sebastian Vettel to the P1 spot by a mere 0.012 seconds in Austin.

Bottas set a new track record with a 1:32.029 on his first Q3 lap and that remained undefeated as the top six drivers struggled for improvement on their final attempts. The Finn also secured Mercedes’ first pole since the summer break.

Vettel settled for a front row spot alongside Bottas after also failing to improve, while Max Verstappen was only 0.067s away himself from bagging top spot. P3, though, is where he will start Sunday’s race. Charles Leclerc will line up alongside him in P4.

Lewis Hamilton, who needs just four points to clinch a sixth World Championship title, will start from P5 after being nearly three tenths off the pace and also aborting his final lap.

There were fears that Leclerc would’t be taking part in qualifying with grid penalties to come after his race engine went up in smoke in FP3. However, Ferrari confirmed ahead of qualifying that he was still on a clean slate after swapping to an older power unit.

The Scuderia were off to a sluggish start in Q1 with Vettel forced to go again after a lock-up and Leclerc down in P7 behind the likes of Sainz and Albon.

But, they were both safely clear of the cut-off time as attentions turned to those drivers risking an early exit in the elimination zone.

Joining Sergio Perez (pitlane start coming his way) and the usual suspects of George Russell and Robert Kubica were the Alfa Romeo duo of Antonio Giovinazzi and Kimi Raikkonen.

Track conditions were improving all the time, so much so that one Lando Norris topped the Q1 session by a tenth!

Sadly no such midfield surprises followed in Q2, which began with both Mercedes cars and both Ferrari cars heading out on the medium tyres with a view to starting on them in Sunday’s race. The same applied to Verstappen but not Albon, who was on the soft tyre.

Just a tenth separated Hamilton, Verstappen Bottas, Leclerc and Vettel after their first hot laps in Q2, while Albon went quickest of all thanks to that softer compound.

On the second Q2 runs, Mercedes did their usual of heading back out on the soft tyres but completed slower laps so they could stay on the mediums for the start of Sunday’s race.

Leclerc and Vettel headed back out on the mediums and both found improvement as they took over at the top of the standings.

Failing to make it through to Q3 were: Nico Hulkenberg, Kevin Magnussen, Daniil Kvyat, Lance Stroll and Romain Grosjean.

Onto Q3, it was Bottas who put himself on provisional pole with a new track record of 1:32.029, but just 0.012 separated him and the leading Ferrari of Vettel.

And none of those nearest rivals could knock Bottas off top spot as that aforementioned track record remained unbeaten. The Finn needs to win the US Grand Prix to have any chance of potentially stopping Hamilton winning the title in Austin.