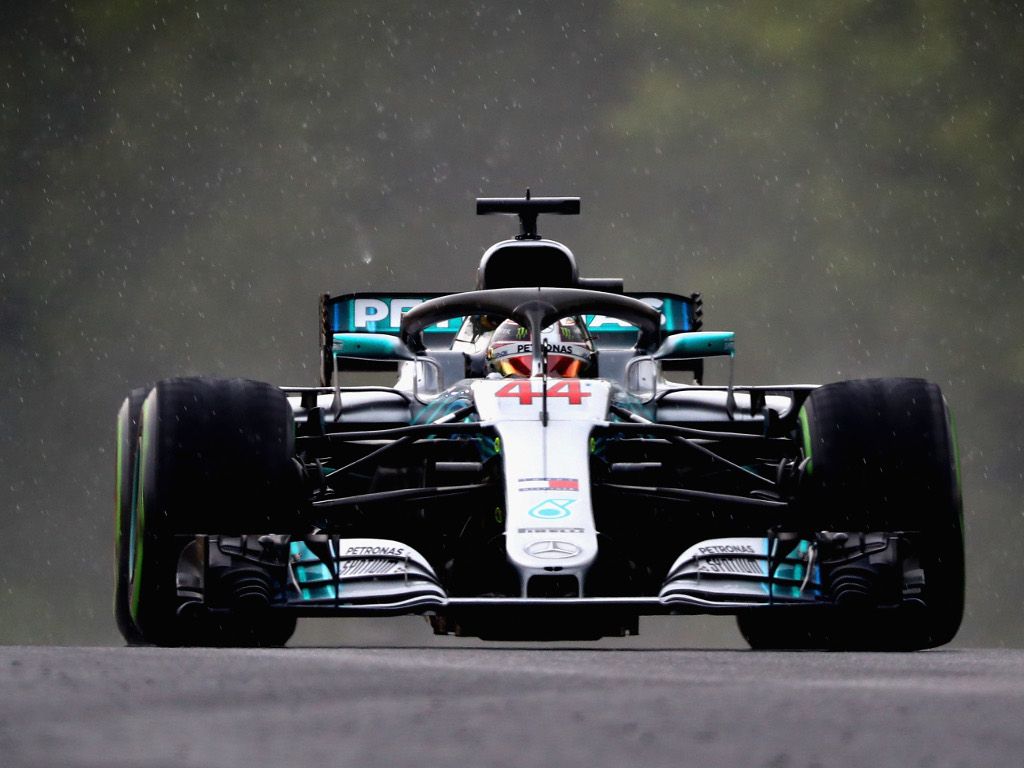 Lewis Hamilton will start the Hungarian Grand Prix from pole position having set the pace in a very wet qualifying session.

Using Pirelli’s wet tyres as the rain bucketed down at the Hungaroring, Hamilton posted a best time of 1:35.658 to grab pole position by 0.260s ahead of Valtteri Bottas.

After the earlier heat, then came the rain with Saturday’s Q1 taking place on a wet Hungaroring circuit. Although the rain eased in the build-up to qualifying, the sound of thunder not too far in the distance was a constant warning of what was to come.

Midway through Q1 drivers began to take the gamble of moving onto the slicks with Ferrari, who were holding down the 1-2 on the inters, Mercedes and Red Bull the last to react.

As Romain Grosjean went quickest ahead of Nico Hulkenberg, rain began to fall with Hamilton and Bottas in the drop zone.

They, however, made it to the line just in time with Vettel quickest ahead of Max Verstappen.

There was drama for the Red Bull driver’s team-mate Daniel Ricciardo, who was the last to swap and opted for softs instead of the ultras. He finished Q1 P11 having twice fallen into the drop zone.

Force India’s week went from bad to worse as both Esteban Ocon and Sergio Perez did not have the pace to make it into Q2. They qualified P18 and 19 respectively.

The drivers were quickly out of the pits for Q2, most opting for slick tyres except Vettel, who went with the inters. While that initially raised a few eyebrows, it proved to be the right choice with his rivals immediately heading back into the pits to change tyres.

He laid down a 1:28.6 on a track that was fast looking to be ready for full wets. Carlos Sainz was second, 2.1s down while Max Verstappen went third. Lance Stroll spun and hit the barrier nose first, taking out his front wing, and Raikkonen spun his Ferrari.

Lance Stroll spears off and lodges his front wing in the barrier 😬#HungarianGP 🇭🇺 #F1 pic.twitter.com/N8ciVePhmy

Q3 saw the drivers all head out on brand new sets of wet weather tyres as the rain continued to fall at the Hungaroring. Hamilton was quickest in the early running ahead of Bottas and Raikkonen while Vettel, having been the man to beat in the earlier sessions, was down in sixth place.

Raikkonen jumped to the front of the queue with four minutes remaining, a 1:36.186 for the Finn, sending the Mercedes drivers back into the pits for fresh wet tyres.

Vettel moved up to second place, but fell to fourth as Hamilton took pole with a 1:35.658 by 0.260s ahead of Bottas. Raikkonen was third.

Brendon Hartley made it into Q3 where he was P8 ahead of Kevin Magnussen and Romain Grosjean.