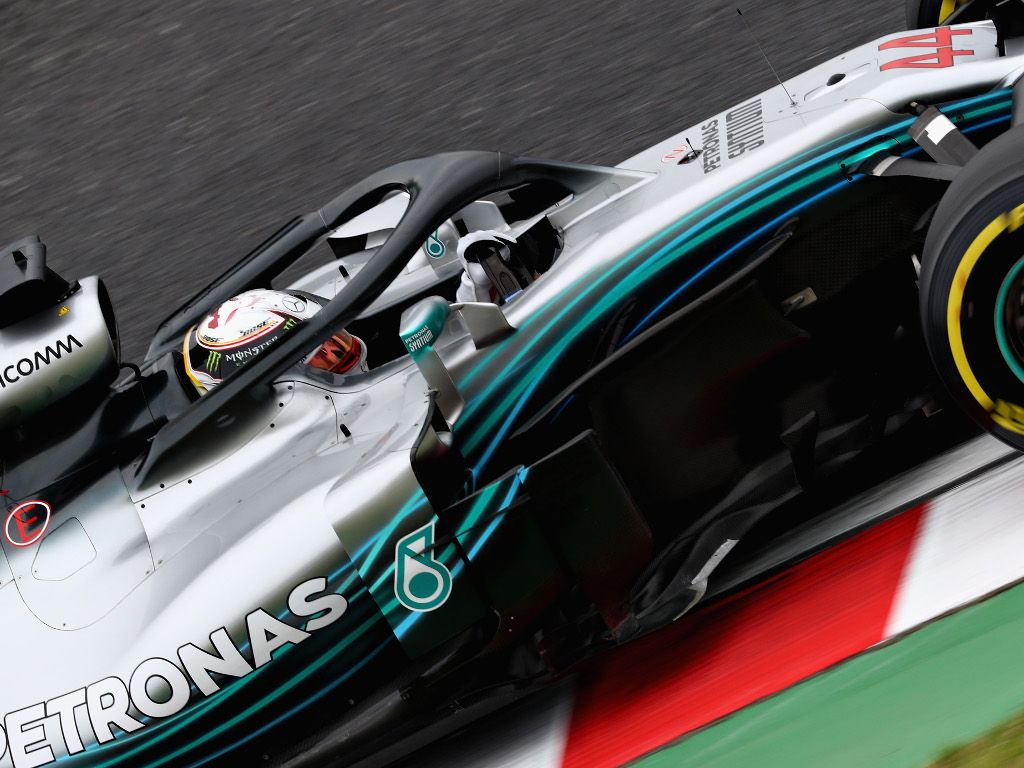 Facing a tailwind through the corners, the conditions caught out several drivers with Marcus Ericsson putting his Sauber into the wall when he ran out of road at the Dunlop Curve. “It’s over,” he told his team.

Now @Ericsson_Marcus is off, and out of qualifying #JapaneseGP 🇯🇵 #F1 pic.twitter.com/hvxc4N46Pc

As a result, Q1 was red-flagged for several minutes while the marshals removed his Sauber, which had sustained damage to the front and rear.

Hamilton finished the opening segment P1, 0.3s ahead of  Vettel.

Q2 took place began on a dry track with Mercedes again at the fore, only this time it was Bottas with a 1:27.987. Hamilton was P2, 0.030s down with both using the soft tyres to their rivals’ supersofts.

Daniel Ricciardo’s chances of making it into the pole position shoot-out were undone when he reported a “loss of power”. He let out a scream as he walked away from the Red Bull garage.

There's worried faces down in the Red Bull camp, as Ricciardo limps back to the pits 😔

Ricciardo: “I had a little loss of power.” 📻

It would be a shame if Ricciardo can't get back out, as team-mate Verstappen slots into P5 😐#C4F1 🇯🇵 #JapaneseGP pic.twitter.com/UyRiDnaQVs

The Aussie, missing out on Q3 for the fifth time in seven races, dropped out along with Charles Leclerc, who spun on his final attempt, Kevin Magnussen, Carlos Sainz and Lance Stroll as rain again began to fall.

Both Toro Rossos were into Q3 at Honda’s home race.

Q3 began with a strategy error from Ferrari as they sent their drivers out on the intermediate tyres. Vettel responded almost immediately by saying it is “quite dry” for the inters, adding that he’s “coming in straight away”. Mercedes left the pits on the slicks.

Hamilton went quickest with a 1:27.760, 0.3s up on Bottas, as the rain began to fall. Ferrari, having pitted for slicks, had the worst of the track conditions with both drivers struggling to keep it on the track. Raikkonen was fourth, Vettel ninth.

With more rain falling, Hamilton was not able to improve on his P1 time, neither was Bottas who went off the track, handing Hamilton a fourth Japanese GP pole.

In fact none of the top ten could improve with Max Verstappen qualifying P3 ahead of Raikkonen, Romain Grosjean and the Toro Rossos of Brendon Hartley and Pierre Gasly.

Esteban Ocon was P8 ahead of Vettel and Sergio Perez.

P9 has since become P8 for Vettel after Esteban Ocon was given a three-place grid drop for failing to slow sufficiently during red flags  in FP2. The Frenchman now starts P11.