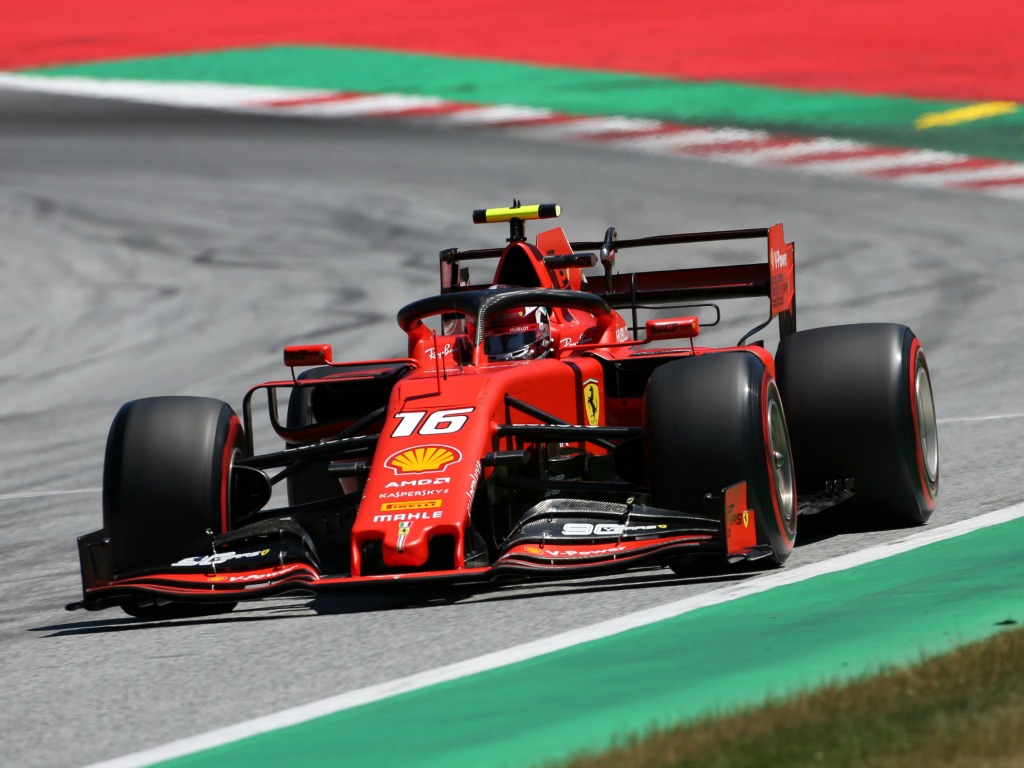 Charles Leclerc recorded his second career pole position in some style at the Red Bull Ring, while Lewis Hamilton was placed under investigation and Sebastian Vettel failed to set a lap in Q3.

Leclerc crushed the opposition with a 1:03.003 on his final hot lap, beating Hamilton to pole by two tenths. Hamilton, though, got himself in a spot of bother with the stewards for blocking Kimi Raikkonen in Q1 – a three-place grid drop was his punishment.

Max Verstappen pipped Valtteri Bottas to what it is now P2, with Magnussen, Norris, Raikkonen, Giovinazzi, Gasly and Vettel completing the top 10.

Vettel was unable to take any part in Q3 due to an engine issue suffered in Q2.

Track temperatures rocketed up to 52 degrees as the light went green to mark the start of Q1.

Leclerc and Vettel went for a spot of medium tyre running on their first runs in Q1 and the former banged in a 1:04.304 to sit a tenth clear at the top.

Leclerc then found further improvement on his second Q1 lap with a 1:04.138; Verstappen, Vettel and Gasly all two tenths behind.

Hamilton and Bottas both had sluggish starts on the softs. Three tenths and six tenths behind respectively at the midway point of Q1.

Track evolution saw the midfield runners climb up the leaderboard, forcing Hamilton down to P8, Bottas down to P12 and into some second runs in Q1.

Verstappen also went out again and set the quickest Q1 time in the process – a 1:03.807. Hamilton put a cleaner lap together to be 0.011s off the pace. Bottas ended up rounding off the top three, two tenths back.

The usual suspects failed to make it out of Q1 with Williams duo George Russell and Robert Kubica, plus Lance Stroll exiting early.

Joining them were Sergio Perez and Daniil Kvyat, who had to take evasive action when negotiating a ton of traffic at the final two corners of his hot lap.

Prior to Q2, the stewards confirmed that they would be investigating a potential block from Hamilton on Raikkonen which occurred in the early stages of Q1. Kimi giving Hamilton the middle finger for good measure.

There was further intrigue in Q2 as Ferrari went for the softs and Mercedes plus Verstappen opted for mediums as their starting tyres for Sunday’s race, adding more strategic variance.

Heading into the top 10 shoot-out, Leclerc was the man to beat for pole position as he pumped in a 1:03.378 to sit two tenths clear of Vettel.

Missing out on the top 10 were Grosjean, Hulkenberg, Albon, Ricciardo and Sainz.

Ahead of Q3, frantic work was going on with Vettel’s car because of an issue at the front of the sidepod on the left-hand side of the SF90.

Whilst he was rooted to the garage, Leclerc put himself on provisional pole with a stonking time of 1:03.208.  Bottas could only get to within three tenths in second. Verstappen put himself in between the two Mercs in P3 ahead of the final hot laps of Q3 run.

As the other drivers were preparing for those, Vettel jumped out of his car. Game over without setting a lap in Q3 and is set to start the Austrian Grand Prix from P10.

In the final hot laps of Q3, neither Hamilton, Verstappen or Bottas could get close to Leclerc, who crushed his personal best and the track record with an incredible 1:03.003.